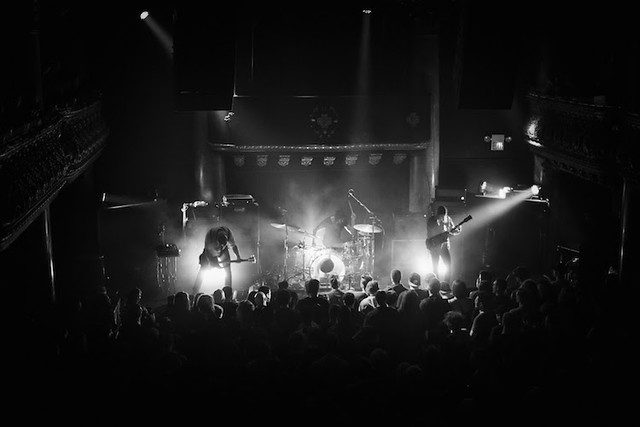 Chicago post-metal trio Russian Circles lit up Belgium’s Dunk! Fest with a live performance on May 7, 2016, which has now been captured to an LP, Live at Dunk! Fest 2016, released April 14. Russian Circles are now bringing their live show closer to us with a performance at The Fillmore Silver Spring on Tuesday, May 2, opening for Mastodon.

Russian Circles consists of Mike Sullivan (guitar), Dave Turncrantz (drums), and Brian Cook (bass), who produce dazzling instrumental selections ranging from the melodic to the primitive to the minimal. Live at Dunk! Fest 2016, their first live album, contains nine tracks from 2008’s Station, their first album, and 2016’s Guidance, their most recent, as well as the others in-between.

Watch a trailer for Live at Dunk! Fest 2016 by Russian Circles on YouTube:

In 2016, the band also released their sixth studio album, Guidance, via Sargent House.

“Russian Circles have made great use of post-rock most familiar’s dynamic tricks—loud and quiet; stop and start, swell and subside. But they’ve never had qualms about splicing elements of everything from metal and noise-rock to krautrock and post-hardcore into their darkly dramatic, instrumental compositions,” said Jason Heller in a Pitchfork review of Guidance.