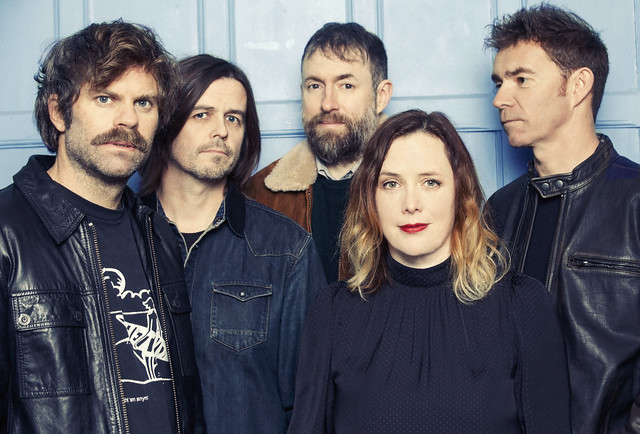 UK shoegazers Slowdive return with a self-titled new album on May 5 via Dead Oceans — their first album in 22 years! Oh, and the band begin a US tour, starting tonight May 2 in St. Paul, Minnesota. That tour lands at 9:30 Club on Sunday, May 7 for a sold-out show.

The Reading quintet return with eight tracks recorded at The Courtyard in Oxfordshire and mixed at Sunset Sound in Los Angeles.

“When you’re in a band and you do three records, there’s a continuous flow and a development. For us, that flow re-started with us playing live again and that has continued into the record,” said principal songwriter and vocalist Neil Halstead.

Pitchfork praised the results, saying, “It’s gorgeous, but grounded. In their newest incarnation, Slowdive have traded the abject longing of youth — an emotion that suffused so many shoegaze classics — for the wisdom of maturity. Every great band should age so well.”

The album cover for the new Slowdive record was inspired by Harry Smith’s Heaven and Earth Magic, a cult animation that has proved very influential since its 1957 release. Indeed, the video for lead single “Sugar for the Pill,” produced by in/out, follows up on that inspiration.

Watch the official music video for “Sugar for the Pill” by Slowdive on YouTube:

The reconstituted Slowdive includes Neil (vocals, guitar, keyboards), Christian Savill (guitar), Nick Chaplin (bass), Rachel Goswell (vocals), and Simon Scott (drums, electronics). Slowdive released its debut album, Just for a Day, in 1991 via Creation Records. The band followed that up with Souvlaki in 1993 and Pygmalion in 1995 before breaking up. They announced their return in 2014.