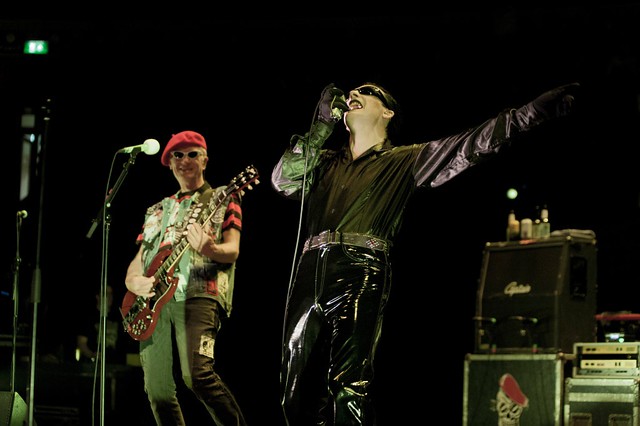 The Damned perform at Royal Albert Hall in London on May 20, 2016. (Photo by Dod Morrison Photography)

Dave Vanian and Captain Sensible are on a US tour to celebrate the 40th anniversary of The Damned, and tickets are still available for their show tonight, May 9, at Baltimore Soundstage.

The Damned formed in 1976 and became the first British punk band to release a single and then an album — “New Rose” and Damned Damned Damned respectively.

You may have heard Captain Sensible fell off stage in Toronto! But never fear, he’s back in action after a broken rib. The Damned returned to stage Saturday in Asbury Park, New Jersey, seated upon a specially built “throne.”

“As movement is a bit awkward currently, I played [Saturday] night seated, but it all went swimmingly and this epic 40th Anniversary tour is now firmly back on the road. We’ve played some great venues on the trip… and Asbury Park’s Stone Pony is up there with the best of ’em. But I have to say I wish I’d waited till here before backflipping off the stage, as this one was only 3 feet high. D’oh!” said Captain Sensible.

The Damned also have signed to Spinfarm Records/Universal, and the band will release its 11th studio album via label Search and Destroy. They plan to record the new album, their first since So, Who’s Paranoid in 2008, this summer.