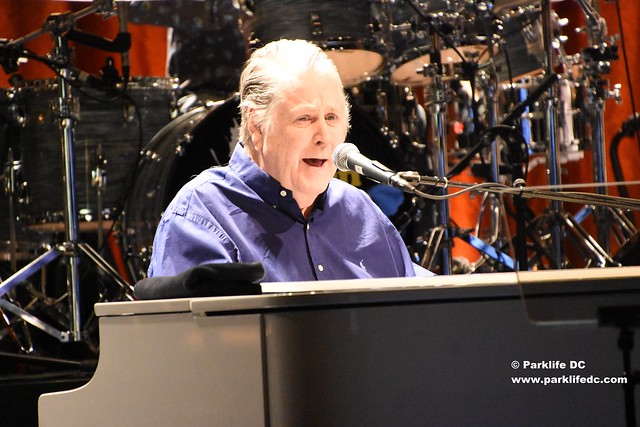 Brian Wilson sings at the Lincoln Theatre on May 3, 2017.

Brian Wilson was surely feeling wistful when he sat down at his piano Wednesday night and opened his sold-out concert at the Lincoln Theatre with “Heroes and Villains.”

The history of the Beach Boys song and its accompanying album Smile mirrors the tumultuous history of Brian’s old band as well as his own singular genius. The lyrics of “Heroes and Villains” deal with survival, and if there’s one thing that Brian has done throughout his musical career, it’s been to survive, and thrive, in the hearts and minds of his audience.

His current tour started some time ago to mark the 50th anniversary of the album Pet Sounds, the musically brilliant 11th studio album by the Beach Boys. No longer using the band’s name due to a rift with co-founder Mike Love, Brian mounted his salute to Pet Sounds with his old friend and bandmate Al Jardine and onetime Beach Boy Blondie Chaplin. They were more than capably supported by nine additional players, including Matt Jardine (Al’s son), as they unfolded decades of Beach Boys history over roughly two and a half hours to the delight of their DC crowd.

Brian next sang the lead vocals for the iconic “California Girls,” which debuted on ninth Beach Boys album Summer Days (And Summer Nights!!). While Brian remained affixed to his piano, his recognizable, powerful voice traveled throughout the theatre, and the instant familiarity of the song pleased everyone present, teenagers and senior citizens alike.

Al Jardine stepped up for lead vocals several times throughout the show, notably taking the spotlight for a few songs beginning with “Little Deuce Coup.” Several songs later, Brian and company performed “Surfer Girl,” which was the original A-side single on the record containing “Little Deuce Coup,” and it rather provided some perspective when Brian introduced the lead song as one that he wrote when he was 19. “Surfer Girl” gives the Brian Wilson ensemble a pleasing opportunity to harmonize on the chorus, but Brian’s voice really delivered on the romantic overtones of the love song. 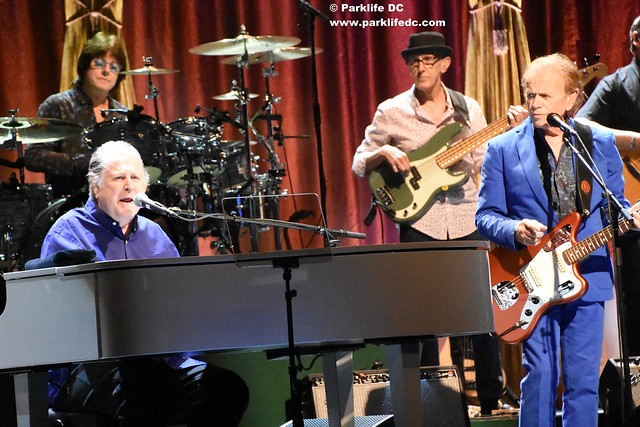 In between, “Help Me, Rhonda” showcased some strengths of the touring band, including a tremendous saxophone solo from Paul Von Mertens. Although we haven’t officially been introduced to him yet, Blondie Chaplin wandered around the stage with a tambourine, making me wonder if he were simply there to dance around in his signature shuffle (like Bez perhaps in the Happy Mondays). Blondie would soon demonstrate his full power indeed, however.

On lead vocals, Al sounded as bright and buoyant as ever as he waved the audience into singing along with irrepressibly catchy tune. Brian, as he often did at times, looked down focused on his piano throughout the number. Matt Jardine stepped into the spotlight for lead vocals on several songs, including “Don’t Worry, Baby,” and he proved a winning presence in backing up his dad and Brian at various turns throughout the entire show. 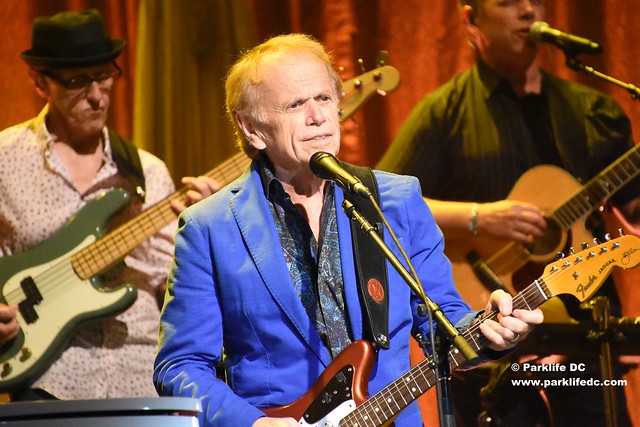 The first act of the show ended in a lightning strike of guitar showmanship when Blondie Chaplin returned to sing three songs. For me, the show’s biggest surprise was my introduction to Blondie, who fully seized our attention with his big, booming voice and his versatile guitar chops.

Blondie sang “Feel Flows” by Carl Wilson — Brian’s brother and bandmate, gone nearly 20 years ago — and he imbued it with feeling and depth. Blondie switched up from the prog-leaning “Feel Flows” to the psychedelic title track of the Beach Boys 1967 album Wild Honey. He breathed a powerful bluesy vocal into the song before wrapping up his vocal stint with the 1973 single “Sail On, Sailor,” for which he originally sang the lead for the Beach Boys during his stint as a member of the group.

The biggest thing I got out of Brian Wilson’s show that I didn’t have going into it was a working knowledge of Blondie Chaplin’s career and capabilities. What a remarkable musician! I made notes to follow up on the South African native’s catalog.

Of course, after a brief intermission, the second act of the concert delivered the main event that everyone sought in a 13-song play-by-play of the album Pet Sounds.

I’m far from an expert on the album, regularly ranked as one of the best in modern rock, but the joy of catching the live show is that you don’t have to be. There were standout songs that everyone knows and associates with the Beach Boys, whether you know specifically they were from Pet Sounds or not, and there are other moving selections that sweep you along with their artistry even if you don’t know them as well. It was easy to pick up and groove along to “Wouldn’t It Be Nice” and “Sloop John B” (the latter of which I learned to sing in elementary school music class honestly), but it’s also very absorbing to become wrapped up in “I Know There’s an Answer” and “I Wasn’t Made for These Times.” 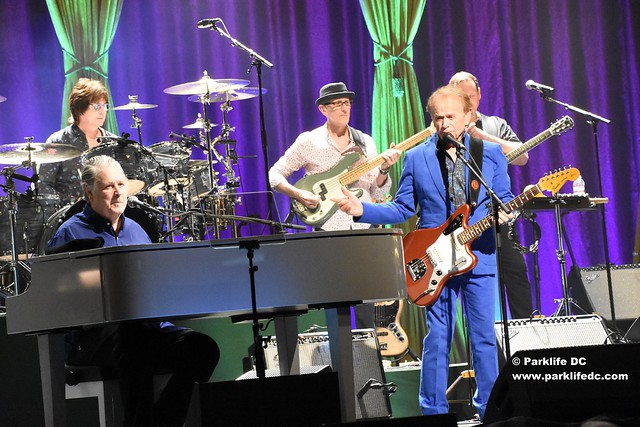 At the halfway mark, of course, the always sharp Al Jardine observed, “That was the first side of the record. And then, y’know, you flip the record over for six more cuts. And that first cut is a big one.”

Brian struck well-known chords on his piano and performed “God Only Knows.” The song was unmistakably in the hands of its author, even if his voice were a bit more folk than once it was and surely a departure from the famous lead vocals of his brother, who sang it originally.

The Lincoln Theatre audience bolted up for a sustained standing ovation at the end of “God Only Knows.” Brian let it go for a moment before imploring everyone to return to their sets. Maybe he always was this way, but Brian is very unfussy and very modestly focused on the proceedings of the show, and he will apparently look askance at lengthy speeches or ovations that delay him and the band from getting on to the next song.

Brian Wilson and company weren’t yet done, as they returned for a lengthy encore that included some of the biggest megahits of any band much less the Beach Boys. They kicked it off with a smashing “Good Vibrations,” enlisted the audience in some “Fun, Fun, Fun,” and brought it all home with Brian’s own “Love and Mercy.” Five encore songs in total flowed into one another as the band paced us through a jam that gave each song its due.

Brian resumes his tour tomorrow, May 9 in Birmingham, Alabama, and tours through the Southwest and California to wrap his current US leg on May 28 in Santa Barbara (but then he adds June 15 in Hawaii). He will sweep Europe over the summer to return home again before the surfer girls pack up their boards. The show is being billed as your last time to hear Pet Sounds in its entirety with Brian, and that is reason enough to sign up for a show near you. But go expecting a whole spectacle with many moving parts and many talented musicians putting on an old-fashioned show exploring the aspects of psychedelia, prog, and chamber pop stewed into the indelible songs of the Beach Boys and its full range of instruments, which is impressive indeed.

Here are some more pictures of Brian Wilson, Al Jardine, and other players in their band performing at the Lincoln Theatre on Wednesday, May 3, 2017. 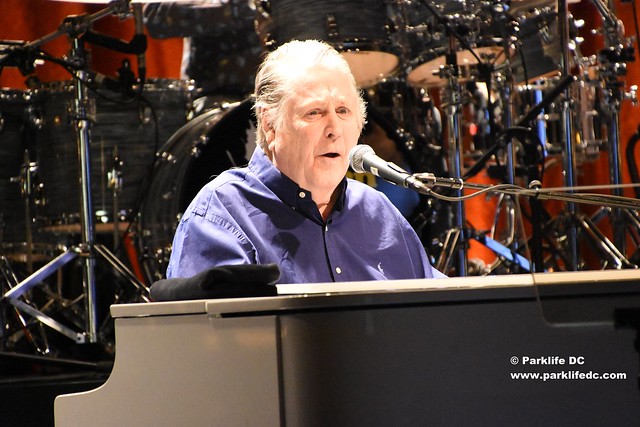 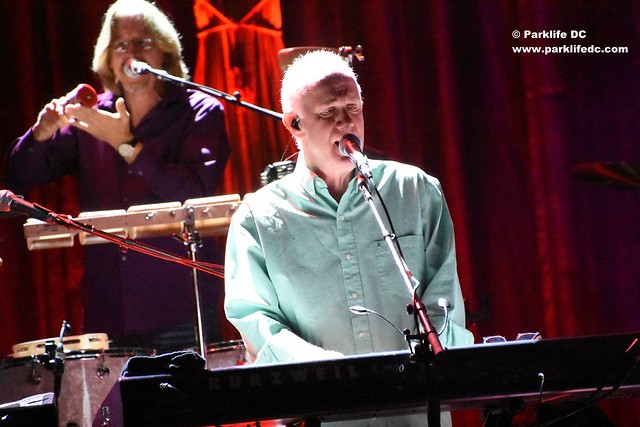 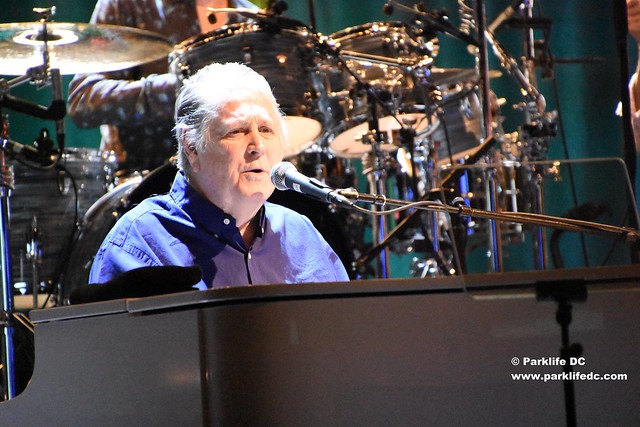 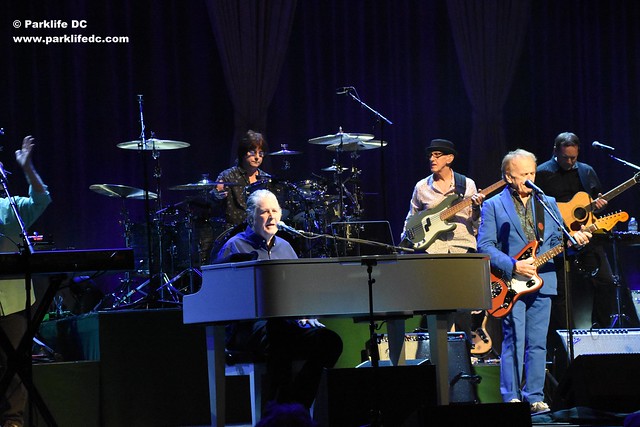 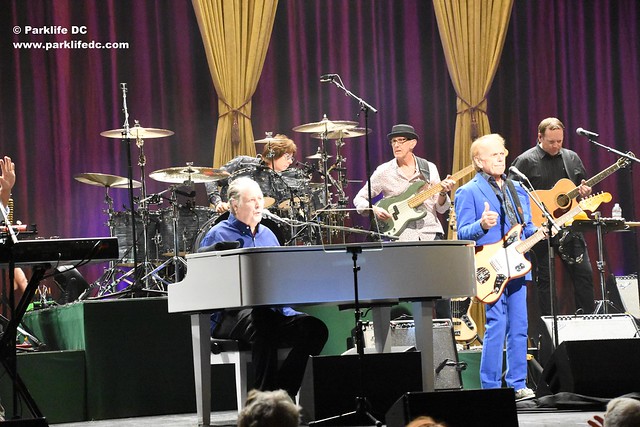 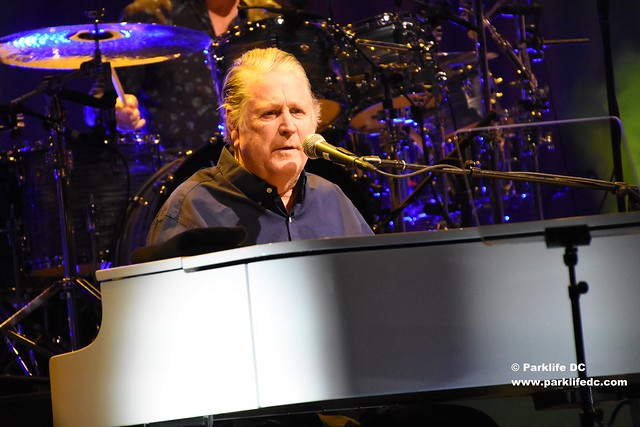 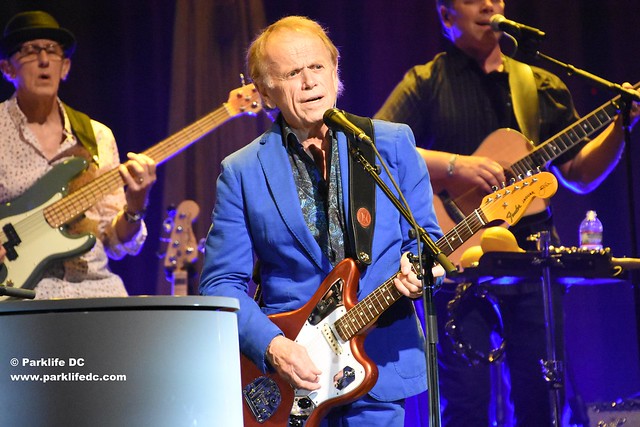 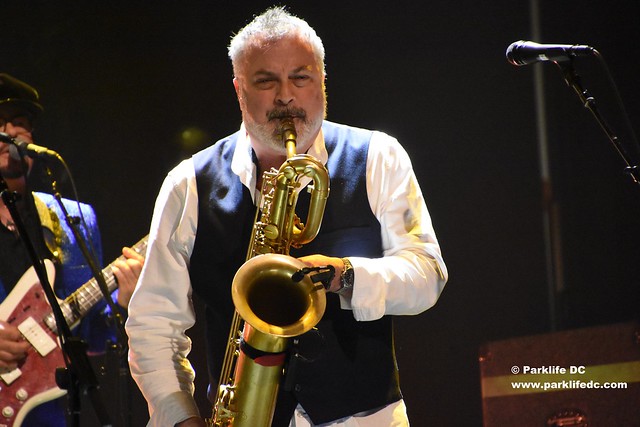 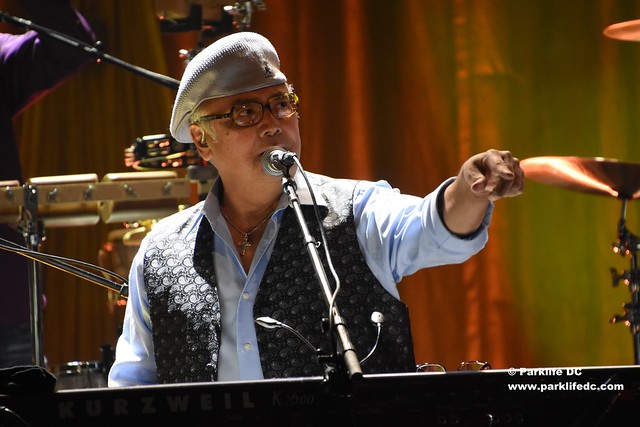 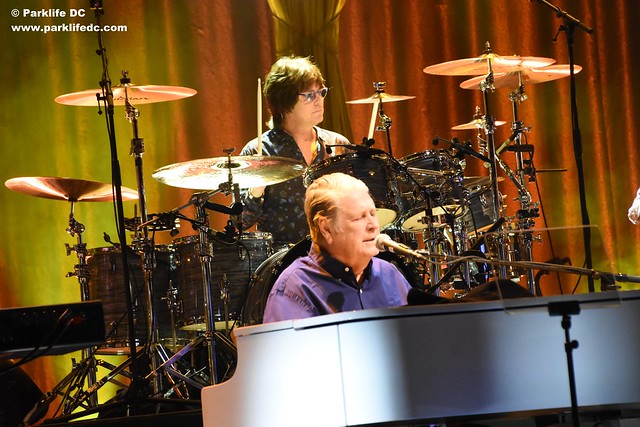 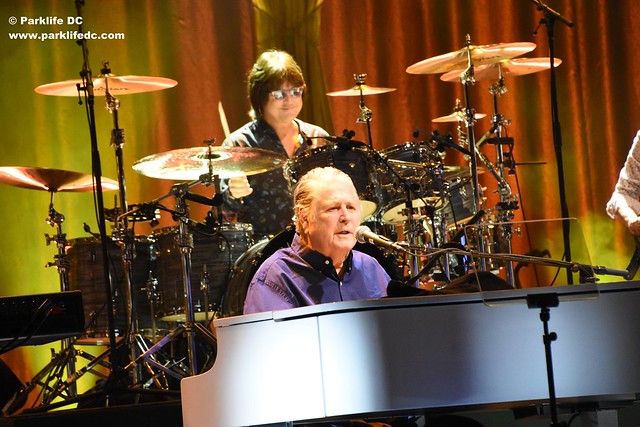 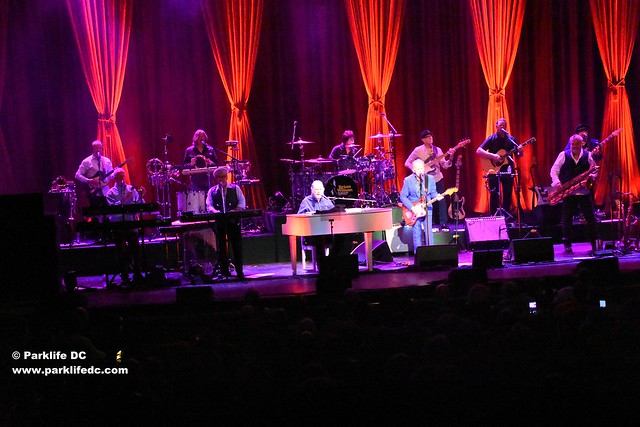 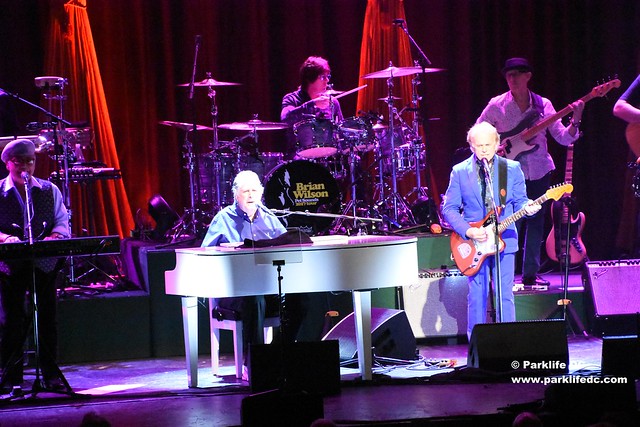