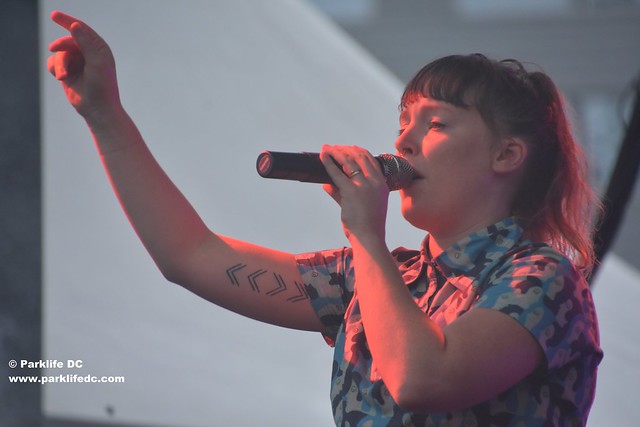 Amelia Meath sings with Sylvan Esso at All Things Go Fall Classic in DC on Oct. 8, 2016.

The music of Durham, North Carolina duo Sylvan Esso was introduced to me last year by my friend and Spotify buddy Jenny, in the form of a YouTube video for their song “Hey Mami.” Straightaway, I admired singer Amelia Meath’s energy and extro-expressiveness, both on display in a sold-out show at 9:30 Club on Saturday.

The band’s sound can be characterized nu-electro or modern synthpop (kind of a Yazoo for the post dubstep generation), but in this video Amelia is backed by a four-piece brass ensemble and a drum-and-wine-bottle percussion section. (And it was shot on a rooftop to boot).

I picked up on the triplet rhythms in Amelia’s vocal delivery (a very stylish motif these days) and more broadly with the duo’s willingness to experiment with sounds and arrangements. When the songs hold up so effectively under such varied treatments, as they do here, you know you’re onto something.

Further playlist surfing reveals a repertoire that is equally adept at breezy electropop, frenetic dance grooves, and abstract sparse sound collages with structures as transparent as a jellyfish. Could these more ephemeral pieces be included in a set before a crowded, sold-out 9:30 Club? Would they hold up under such scrutiny?

Sylvan Esso did offer a couple of their more formless creations — and that they did in fact work quite well. And no worries on the audience reaction to offbeat sounds, this group was transfixed. I suspect the crowd included at least a few attendees who have suffered the kind of unwelcome attention that Amelia laments in “Hey Mami.” Their enthusiastic response speaks to how she could become a grounding point for femme-centric thought.

The other half of Sylvan Esso is electronicist Nick Sanborn. He is alone on the stage at the beginning of the set. Behind him, a gigantic lighting effects contraption looks rather like the upturned legs of a vanquished robot spider. Before him, a performance rig no doubt contains a variety of pads and processors (if there’s an actual keyboard, I can’t see it from my elevated perch).

He opens with a meandering tone that sounds like a synthetic kazoo. Amelia’s vocal gradually emerges from the wafting tones, tracking in unison as she steps onto the stage. Both performers are sporting unpretentious threads that allow for lots of movement. This serves them well as they transition into “The Glow” from their new album What Now, an up-tempo stomper that evokes Depeche Mode’s “New Life.” As she performs, Amelia’s physicality mirrors the music: high spirited, smooth, weaving through the sonic textures like a figure skater.

I’m having trouble finding corollaries for her vocal stylings, as they are very distinctive. At times, Amelia sounds a bit like Dragonette frontwoman Martina Sorbara, if she were inclined towards scat singing in a higher register. There’s a little of the vowel heavy timbre of Canadian singer Feist, or Harriet Wheeler from The Sundays. Ultimately, her style is uniquely hers, and something about her lilting Billie Holiday-like phrasing sounds like it should be escaping the soft fabric speaker of an old wind-up Victrola.

The band’s set draws equally from both of their LPs. The selections from the new album What Now emphasize more energetic dance-friendly material. This is clearly evident with their seminal hit “Radio,” as well as with “Just Dancing,” “Song,” and “Kick Jump Twist.” But not exclusively so — the latter is the most rhythmically complex of the floor fillers.

In contrast, several of the more abstract selections come from their latest collection, including the seductively oblique “Slack Jaw.” College radio fave “Die Young” is presented midset; its slower rhythm and heavier tones adding gravity to the presentation. There are lots of gems from their first album as well, including the absolutely essential “Coffee” and “H.S.K.T.”

I’m frequently reminded of how music has connected with friends and compatriots in fandom, often recalling specific people and circumstances. Such is the case with “Hey Mami,” which gets a crowd reaction second only to “Radio.” Hearing it at this packed 9:30 Club concert reminds me of the fellow traveler who introduced me to Sylvan Esso: Thanks, Jenny!