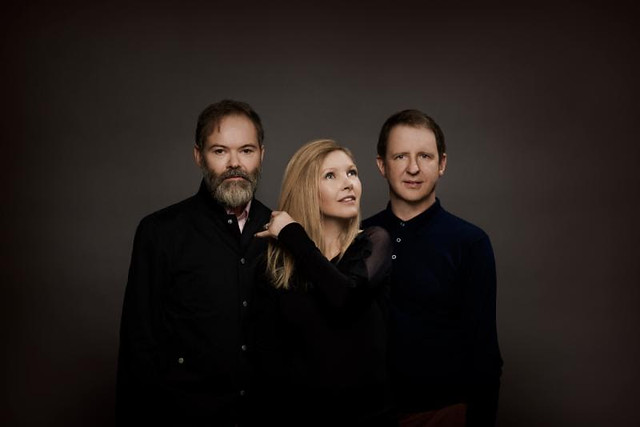 Saint Etienne released their latest album Home Counties on June 2 via Heavenly Recordings, and the English synthpop trio will launch a US tour in Boston on Sept. 24, arriving in DC several days later to perform at U Street Music Hall on Wednesday, Sept. 27.

Formed in London in 1990, Saint Etienne are a fantastic band consisting of vocalist Sarah Cracknell and synthesists Bob Stanley and Pete Wiggs. The trio have released nine albums to date, mining intoxicating Euro-rhythms with a flair for the nostalgic to produce irresistible pop gems.

Recently, the band released “Magpie Eyes,” the lead single from Home Counties. Pete discussed the idea behind the song, saying, “The title was inspired by a book about Creation records ‘my Magpie Eyes are hungry for the prize,’ which in turn was taken from ‘Up the Hill Down the Slope’ by The Loft. I often find myself being so deep in thought that I’m not really listening to what my children are saying to me and I extrapolated guilty feelings over that into the story of someone who for a combination of personal ambition and commuter journey time ends up missing out on his kids growing up and not really knowing them or the ‘Herberts’ they might be hanging out with.”

Listen to the official audio for “Magpie Eyes” on YouTube:

Every Saint Etienne album is a winner, and Home Counties is no different, garnering critical reviews from adoring dance enthusiasts. Writing for The Line of Best Fit, Slavko Bucifal praised the new album for both its sophistication and accessibility.

“Thematically the album’s tight and the catchy hooks and danceable rhythms drip with just the right amount of psychedelic dance-pop sweetness. With infectious grooves, great musical phrases and smooth almost sultry vocals, it all makes for another Saint Etienne record that’s extremely hard to dislike, especially when Sarah Cracknell beckons us to stay with her longer ‘Underneath the Apple Tree,'” Slavko wrote.

This is the band’s first US tour in five years, so don’t miss out! Buy your tickets online.