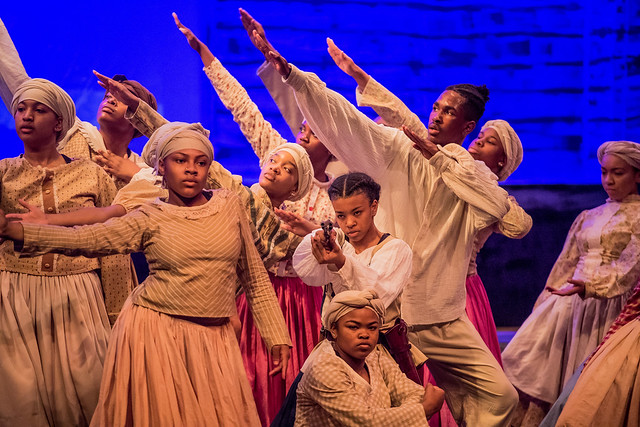 Bishop McNamara High School Sankofa presents two showings of their production of “Harriet and the Underground” at the Warner Theatre on Saturday, July 8. You can win a pair of tickets to see the 2pm matinee with Parklife DC. In fact, we can award quite a few pairs! Read on for more details.

Students at BMHS Sankofa present a dance theater celebration of the life of Harriet Tubman in “Harriet and the Underground,” featuring African and modern dance, live music and drumming, and cutting-edge tech. The production places you “in the scene” of Harriet Tubman’s story of rescues along the Underground Railroad with state of the art, 3-D scenic projections.

Check out a clip of the production at BMHS Sankofa from April in this video, courtesy BMHS Sankofa:

Harriet Tubman, of course, was a leading beacon of freedom as a former slave who helped other slaves escape as a “conductor” of the Underground Railroad. The performance of “Harriet and the Underground” captures her story from her time as a young slave girl to her escape from the plantation to her return to help others. And it does so with the arts of Traditional African Music and Dance.

The high school ensemble will perform two shows on Saturday, July 8 — a matinee at 2pm and an evening show at 7:30pm. You can claim a pair of tickets to see the matinee!

To win, email us your name for a pair of tix at parklifedc@gmail.com. We’ll put you on the guest list. It’s that easy! We have multiple opportunities for people to go, so let’s pack the house.