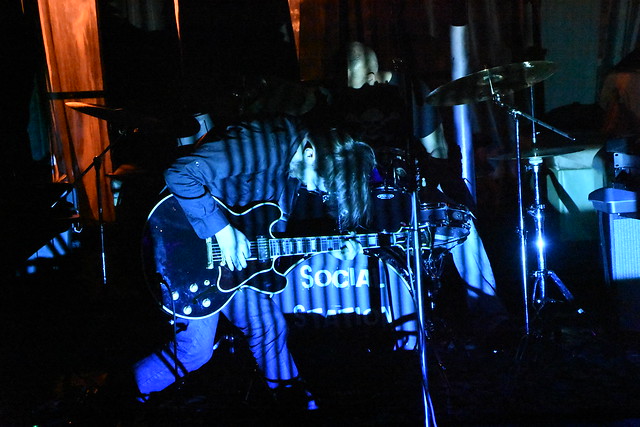 I caught Social Station’s performance, and I was quite impressed with the quality of their songs. After the show, I reached out to Social Station frontman Paul Todd, who sings lead vocals and plays guitar, for an interview about the band’s music and plans. He told me about the upcoming Aug. 22 performance at Smith Public Trust (3514 12th St. NE, DC), where they plan to have a release party for live versions of new songs. We also discussed the band’s spontaneous songwriting process and how that lends itself to the poetic allusions of their lyrics.

Listen to Our Pleasure of Solitude, the debut full-length album by Social Station, on Bandcamp:

Mickey McCarter: “The Sun and the Air” appears to be your earliest track, and it certainly has overtones of the early days of The Cure when they were a lo-fi three-piece post-punk band. Is The Cure a direct influence? More generally, do you take inspiration from that period of music in England circa the late ’70s?

Paul Todd: Early Cure, along with Joy Division, certainly influence the sound or aesthetic of our music. From a songwriting perspective, early David Bowie and The Smiths lend a ton of inspiration.

MM: A short time later, “The Sun and the Air” appears on With a Smile, your first EP, and there is some remarkable growth in your sound there in a short time. But also a full development of themes — romantic yearning and isolation. There’s a lot on that EP about overcoming barriers — time, distance, hardships — but those themes are presented in a slow and methodical way through the sentiments of the song. So, here’s a question — what’s more important here? What is being said or the manner in which it’s said? Is it more urgent to tackle the themes or more so to allow the poetry of the music emerge? Or are the two inseparable for you?

PT: This is a tough one. In general, the themes of the music and the delivery evolve pretty naturally. For the most part, songs, such as “Awfully Pretty,” “Pray for Me,” “Until Today Is Tomorrow,” and “Hands on the Ground,” started with just a simple note progression by Spenser Kydd or a beat by Alex Minx and led to a song with the lyrics, vocals, and guitar worked out on the spot.

This spontaneous approach tends to generate a ton of songs, very quickly. We record these sessions, just over the air. Usually, at least a couple of ideas stick and kick off an intensive, borderline obsessive, process to refine the lyrics and guitar lines. This is where looping pedals come in handy, repeating phrases endlessly until things fall into place between the vocals and the progression. Because of the upfront spontaneous approach, the themes definitely emerge, never a starting point or focus.

MM: As we move along your catalog to the LP Our Pleasure of Solitude, you reinforce the theme of isolation, but there’s also a turn to a more melancholy sound. Is this deliberate? I ask following my sense on this album that you really “get” the idea of the genre “dark wave” — these songs also have a strong pop backbone. I know it’s sometimes dispiriting to throw a label on everything, but it’s kind of exciting when you like a certain genre and sound like myself and you encounter musicians who “get it!”

PT: “Melancholy sound” is a great way to describe the Social Station expression throughout the Our Pleasure of Solitude album. Looking up the definition of melancholy, “a feeling of pensive sadness, typically with no obvious cause.” This is heavy stuff.

For better or worse, this is not intentional. Social Station naturally found and embraced a home in the dark wave and post-punk genres. Each of us work out our demons through the music. Believe it or not, it is a feeling of pure joy! Much more constructive than substance abuse and less expensive than therapy.

The strong pop backbone is very much intentional. A lot of effort goes into making the songs as seemingly simple as possible and not veer too far into the deep end. It is a fine line to not be too miserable or sad, sarcastic, or bitter. This approach has enabled some really great interpretations of our songs through various remixes.

MM: Your new songs “Echo Chamber” and “Try,” both performed last month at Dr. Clocks, also seem to represent a bit of a shift in that perhaps they contain a more commentary on society or maybe at least social groups than your previous songs. Where you motivated by anything in particular in writing these songs?

PT: It is pretty tough, being based in the Washington DC area, to not get sucked into the highly politicized environment we are living through right now. Similar to our last album, themes for our new songs pull from our feelings at the moment without a particular goal to make a statement.

A song like “Hands on the Ground” or “The Sun and the Air” certainly evokes images of many of the struggles currently being faced around the world. “Echo Chamber” directly follows that same path, and tries not to take sides, while relating to the human conditions of feeling overwhelmed, misunderstood, or abandoned.

MM: You also mentioned the new songs will be on a new album. When might we expect to see that? And will it too be distributed via Bandcamp?

PT: We are hoping to release live versions of the new songs this summer. We professionally recorded and filmed a show at an amphitheater last month. The release would most likely be on Aug. 22, along with a release show at the Smith Public Trust. Bandcamp would be our platform of choice for the release. 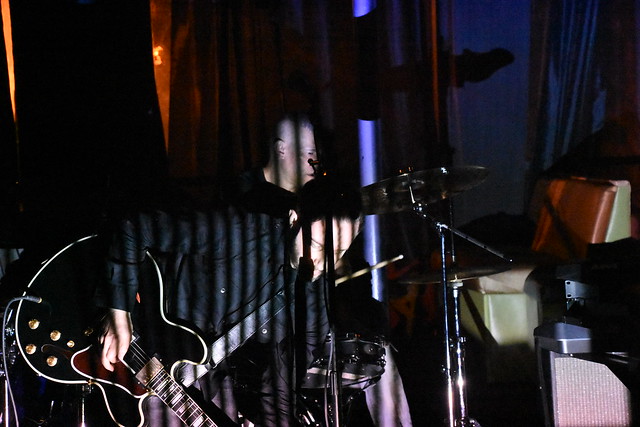 MM: At your show last month, I inferred that you weren’t playing with your full band — yourself, Spenser Kydd, and Alexander Minx. Am I mistaken? Was someone out for that show? [I learned that Jacob Shapiro, a classical musician who plays piano, trumpet, and bass, filled in for Spenser Kydd.]

PT: Unfortunately, Spenser Kydd had to go to the emergency room after our outdoor show on June 10. He has been battling leukemia for the past couple of years. We recorded the Our Pleasure of Solitude LP in a rented industrial space in Baltimore, summer of 2015, while he was in and out of chemotherapy at Johns Hopkins. He returned to the stage in January 2016, and after 18 months of recovery, he has been set back. We will carry forward the best we can until he is able to return.

MM: Any more shows in the works? What’s next for Social Station?

PT: Our next show, Aug. 22, is a reprise of our Black Cat show back in April, joining the stage with the touring band North by North at the Smith Public Trust in DC. In September, we’ll be at Sidebar in Baltimore, supporting the Chicago band Cemetery.

With our next full-length album already written, Social Station will continue to focus on playing new material and supporting like-minded touring bands. We will give Spenser some time to recover before going into the studio to record, and hopefully release our sophomore LP next Spring.

Catch Social Station at Smith Public Trust on Tuesday, Aug. 22. Tickets are available at the door! RSVP to the event on Facebook (optional).