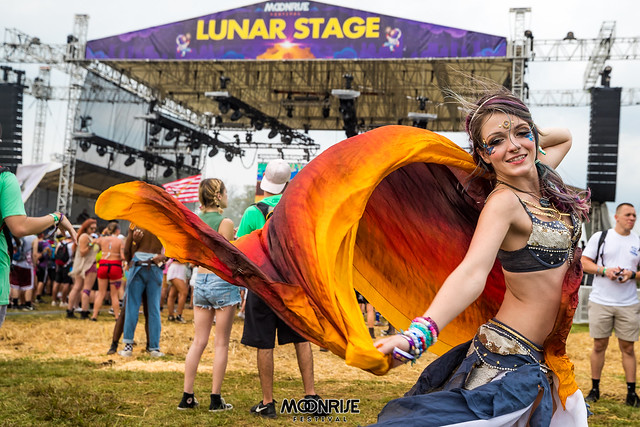 Boy, Moonrise Festival 2017 was a spectacle!

It fell on warm summer days, ideal for the festivities. Moonrise consisted of four stages, which often left attendees sprinting through foot traffic, and it took place over a two-day span in the heart of Baltimore, Maryland, on Aug. 12-13. Here is our recap of the highlights!

The festival began with festival attendees flocking by the masses to hear sounds from their favorite artists. The first day began just before noon with a lineup full of rising stars getting their spotlights and fans grabbing last bites. Moonrise has been known to have some amazing food trucks in the past and this year was no exception! There were several options that caught my eye and tongue for that matter and the one that did it for me was a taco truck that had the best seasoned meats and best vegan treats!

The festival took extra measures to ensure comfort for all guests. Essentia, a premium water company, had several tents throughout the festival. They would pass out free water bottles for sweating shufflers all around. Moonrise Festival had its bases covered… 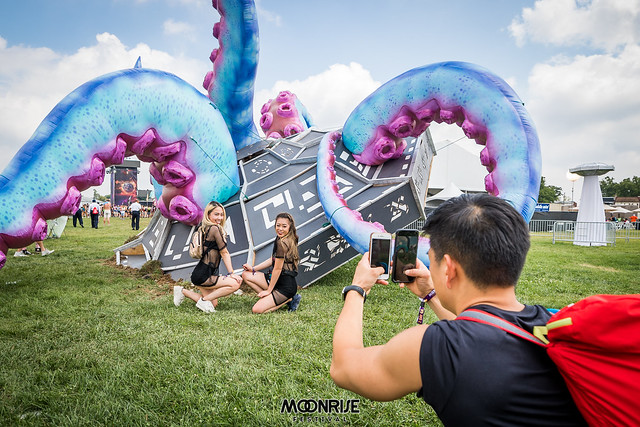 A picture perfect moment at Moonrise 2017 (Photo by aLIVE Coverage)

To get everything started, I caught the trap DJ by the name of RL Grime! RL Grime is most noticed for his classic smash single “Tell Me,” which the crowd erupted over as the intro started to pour in over the speakers. However, he has an influence on a lot of other tracks from originals to remixes. He showcased his arsenal and his set demonstrated his sounds throughout the years. He kept the crowd on beat track after track. The sounds were crisp but not convincing to cement my feet to stay for its entirety (this was a big festival with lots to do after all!) … 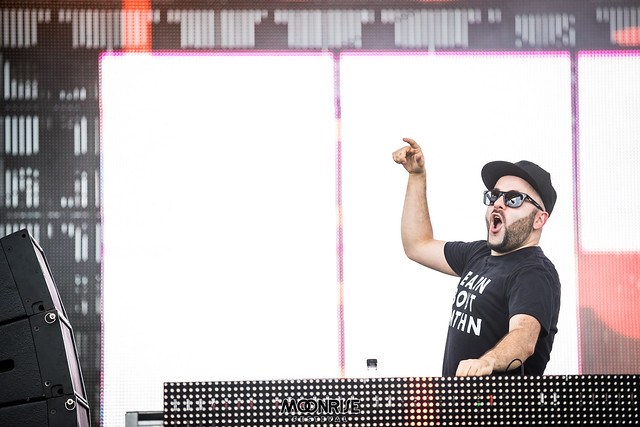 The second act that caught my ear was Denis Jašarević,  better known as Gramatik! Gramatik stepped up and exposed his hip hop background early into his set when his smooth bass lines faded crisply into his soulful melodies. The tricks were definitely in store here as Denis would bring out a special soloist guest, who took his saxophone and blew the crowd away. I was thoroughly impressed with the solo and the performance overall! 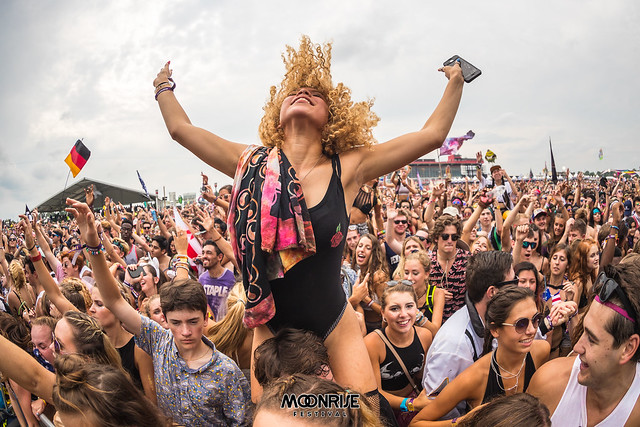 Everything was going perfectly as planned and we were starting to approach the brightest part of the evening. This was where all the stars start to collide, leaving fans to make heart-jerking decisions from stage to stage. However, there was one headliner this year that surprised EVERYONE… Mother Nature! That is to say, it rained.

It was right before the starting time of several top headliners of the festival, leaving many to wonder if there would be a delay or cancellation of the festival. Indeed, festivities were halted and the race course was evacuated. The evacuation sent thousands of attendees to the indoor stands for the race track and/or home. The rain didn’t stop the camaraderie of festival goers as they sang chants and songs while waiting for the storm to pass. Eventually, we would leave until further notice…

Following a slew of announcements from artists and promo companies, Moonrise was set to return 2.5 hours following the evacuation! We are back inside the music festival and ready to check out the modified lineup. The lineup had to be modified to accommodate the artists who are still able to perform with many notable acts missing their slots such as rap trio Migos, exciting and fresh trap artist Rezz, and the progressive house legend Kaskade, to name a few! There was still plenty to see and do. 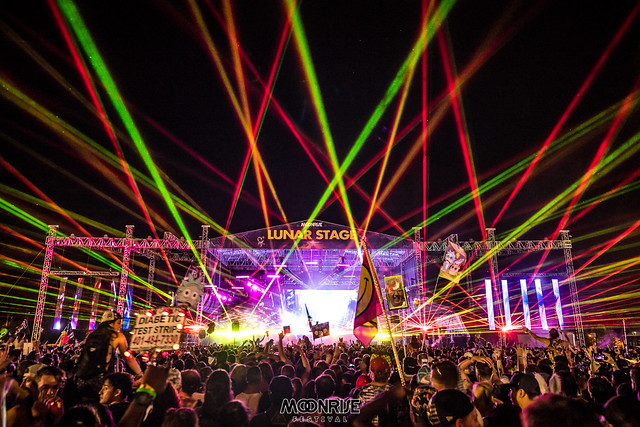 The night would resume with several headliners to be reckoned with. We observed DJ Carnage at the Stellar Stage! The native DMV disc jockey brought the heat not just through the exquisite showcase of what Moonrise’s production has in store but through his precise music selection. It was an unpredictable set teasing hit tracks with classic drops. The most notable moment was when he played his newest single “ChupaCabra”. Roaring stomps and moshing scattered throughout the fresh mudpits. The earlier rain made it incredibly difficult for many to fully enjoy themselves… but there were more who cared less. The Guatemalan artist pumped bass throughout the venue and temporarily erased the heartache caused by the rain delay.

The next day, Moonrise Festival announced that due to Saturday’s rain delay, it would honor day tickets for Saturday ticket holders on Sunday as well! That being said, the festival was at max capacity for the final day, and the weather was beautiful (the ground… not so much). It wouldn’t stop the madness as Day 2 was in full effect… and I was running late to the party. 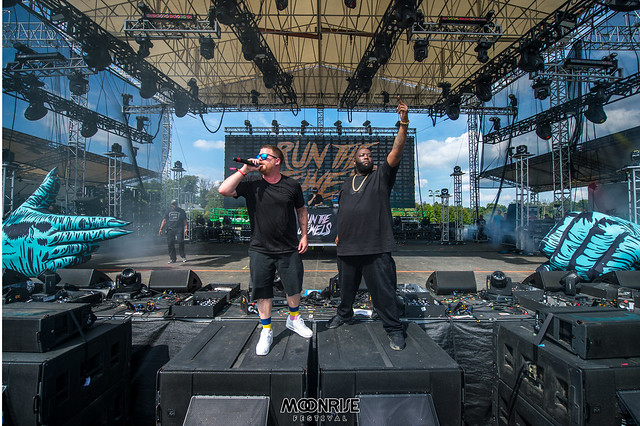 May arrival time landed me in front of Run The Jewels. For the weekend, Run the Jewels would turn out to be the first non-EDM act I witnessed — but they were not to be missed! Run the Jewels had an amazing set filled with hard-hitting songs from Killer Mike and El-P. The duo brought the heat on this blistering August day and made several jokes regarding it as well. It was refreshing, to say the least, and I’m glad I was in attendance.

I decided to partake in Round 2 of Carnage’s set after a bedazzling performance to close out the first night. I was mildly disappointed due to the fact that the sets he played were identical. That being said, I would have stuck around if I had more time. 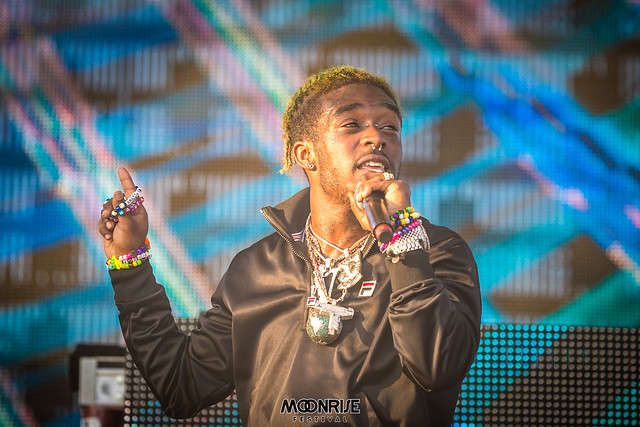 The stage was packed, the sun was taking some time to set and so was the next star. Lil Uzi Vert was next up, and there was a short delay in between his set. However, the DJ for the evening filled that time perfectly. He set the tone with several radio hits. Then Lil Uzi Vert burst onto stage unleashing hit after hit! The energy was immense as he unleashed unstoppable music from his catalog, and the crowd lit up. 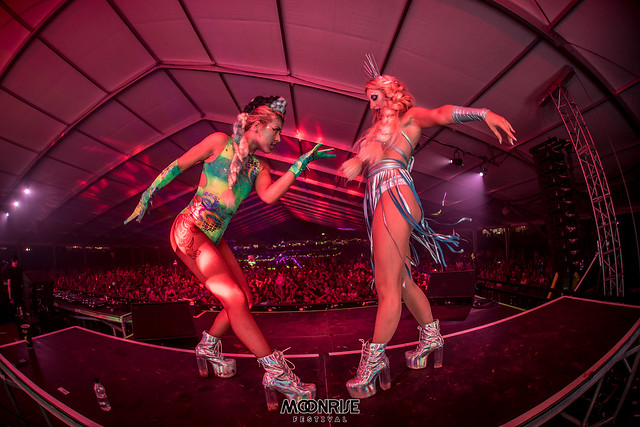 Dancers on stage at Moonrise Festival 2017 (Photo by aLIVE Coverage)

I sprinted from stage to stage in order to catch the Dutch trap duo’s performance. Yellow Claw began their set in style as bass echoed throughout the grounds while heads swayed back and forth in sync! The duo didn’t disappoint as they played several of their new songs, including their recent collaboration with T-Pain, Gucci Mane, and Steve Aoki called “LIT.” The duo ended their set in fashion at arguably the best stage at Moonrise. 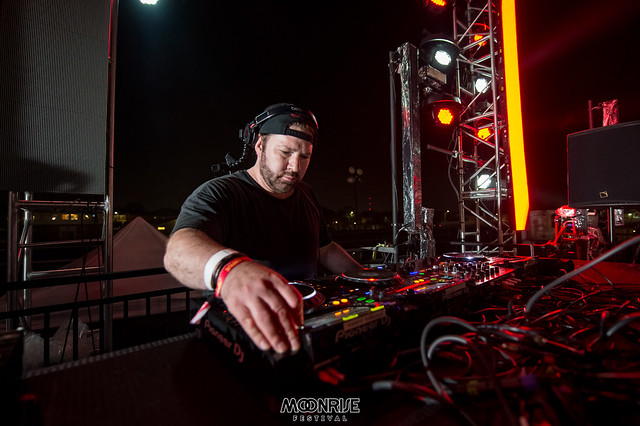 Next up on my musical journey was the always electrifying Shiba San! The floor was shaking and the bass was waking the hearts of house music heads all around. Shiba San delivered my favorite performance of the festival and my first experience at the Celestial Stage up until this point. Most known for his hit track “Okay“, the Parisian DJ and producer had everyone in a dancing frenzy. Every style of dance was exhibited throughout the set, but primarily it was the shufflers that took center stage! The friendly dance battles and frequent fanning kept the dance floor cool. Hands down, Shiba San played the best set of the weekend! 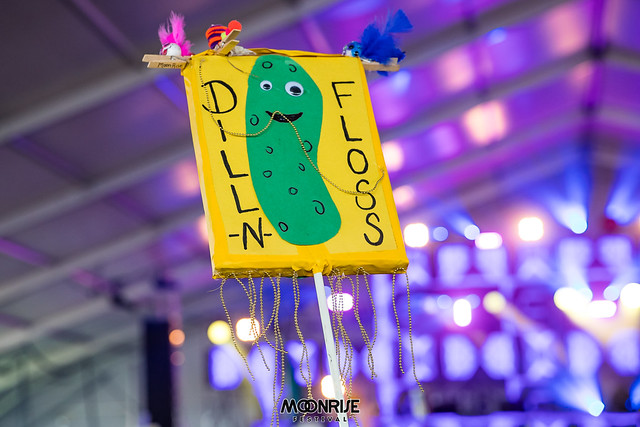 The final rung on our latter was a rare back-to-back performance with two headlining disc jockeys sharing the decks. It was a spectacle to watch as Dillon Francis and Flosstradamus lit up the Stellar Stage! The combined DillStradamus took this performance to the moon and back. It was the perfect closing to a beautiful memorable weekend as the fireworks and flames shot up in the sky to punctuate the evening. 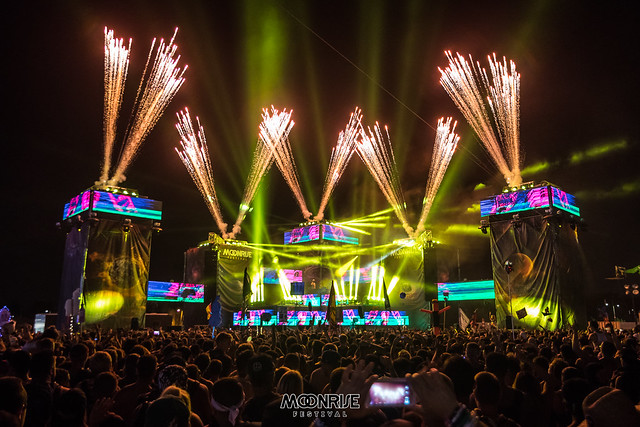 I hope everyone is capable of experiencing an electronic dance music festival like Moonrise Festival. Moonrise sparked positivity in everybody present. When people become united under the power of sound, it is a beautiful thing as it shifts the hopeless into the hopeful. Moonrise Festival 2018 is a highly antipicated affair! Stay tuned and book early with updates at http://www.moonrisefestival.com.

See you on the dancefloor!