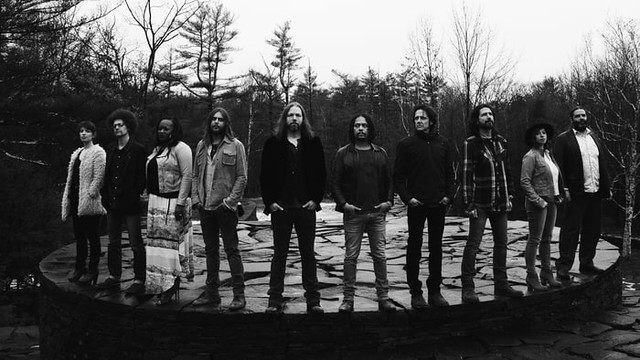 There was not a huge audience, but many of the fans that were there seemed to know exactly what they were seeing. I was surprised to see The Fillmore only about 3/4 full, and that didn’t include the upper level seating on either side of the venue which was curtained off. My guess: not many people know about the Magpie Salute.

Given the popularity of The Black Crowes, I would have guessed there would be a much fuller house, but this band is still pretty new, and they have not been touring for very long. Formed in late 2016 by Black Crowes co-founder Rich Robinson, the Magpie Salute consists of 10 members: Rich (guitar, vocals), Marc Ford (guitar, vocals), John Hogg (vocals, percussion), Sven Pipien (bass, vocals), Matt Slocum (keyboards), Joe Magistro (drums), Nico Bereciartua (guitar), Charity White (backing vocals), Adrien Reju (backing vocals), and Katrine Ottosen (backing vocals). Fans of the Black Crowes will be familiar with many of these names as this band is made up of a few former members of the Crowes.

The Magpie Salute released its self-titled debut album on June 9 via Eagle Rock Entertainment. Below you can watch and listen to some of the best songs on the album on YouTube — songs including “Omission,” “Comin’ Home,” and “Wiser Time.”

Musically speaking, the Magpie Salute rocked. If you are looking for a modern band with that old rock n’ roll feel, look no further. Lead singer John’s voice is a mix of soul and grit yet smooth and easy to listen to. Marc and Rich’s chemistry was on full display.

As a bassist, I always pay special attention to bass players, and I really enjoyed Sven’s performance. He could be heard clearly over the other instruments (something bassists struggle with from time to time in my opinion), and the tone of his bass was perfect for the music they were playing. I also really enjoyed Adrien, Katrine, and Charity’s backing vocals. They had a warm, old-school feel and really tied the sound together.

All in all, I would recommend checking out the Magpie Salute. This is a group of musicians who really love to play and create music, and it shows. If you are a Black Crowes fan, you will absolutely want to see them live. Undoubtedly, the Magpie Salute will grow in popularity over the coming months as more people check them out and go to see them.

While the Magpie Salute aren’t flashy and they aren’t gimmicky, they play some solid rock n’ roll music. Check out songs from their debut album below (as mentioned above, “Omission,” “Comin’ Home,” and “Wiser Time”).