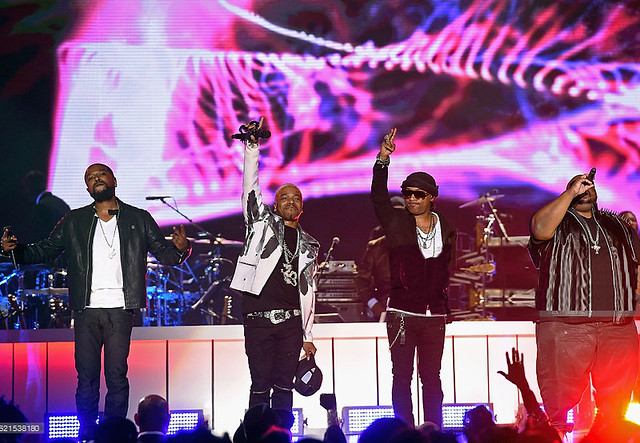 The recent resurgence in urban fashion trends, reunion tours, and contemporary music samplings indicate that the legacy of ‘90s RnB is as potent as ever. To complement the nostalgic resurgence, the contemporary effect of social media allows for the genre to entertain a new generation of fans and revamp chart-toppers for longstanding fans. As evidence of this, 20 years into their career, Baltimore “boy band” Dru Hill hosted fans on nearly a two-hour trip to their sensual and street catalogue at the Howard Theatre on Aug. 18.

Baltimore pride was throughout the evening. Maryland State’s Attorney Marilyn Mosby and her husband, Maryland House of Delegates member Nick Mosby, introduced the group, who rocked the show with the 1996 hit “Tell Me.” Fans bumped through mid-90’s single “Big Bad Mamma” until the opening trio — energetic Sisqo, smooth Nokio, and new soprano Tao — were joined by soulful Jazz to perform “Never Make a Promise.” The performance included a breakdown to which women in the audience were showered with fitting nicknames such as Chocolate, Caramel, and French Vanilla accordingly.

Dru Hill continuously referred to the fans as friends, which indicated a rapport so close when the group convened in silence, the friends began to sing the lyrics to their wedding-classic, “Beauty,” which was performed a cappella.

In the first solo performance midway through the show, Sisqo treated fans to a slew of his early ‘00s hits and features, including “How Many Licks” (Lil’ Kim), “What They Want” (DMX), and “Incomplete,” his only solo single to reach #1. The slow-jam session continued as the band regrouped to perform “These Are the Times” and “We’re Not Making Love,” both with passion and vocal grit to convey the timeless messages of amour and heartbreak respectively. Emotions and memories continued to pour forward when they performed “Sleeping in My Bed” and covered fellow ‘90s group Jodeci with “Forever My Lady.”

New lineup changes aside, Dru Hill vigorously demonstrated that their voices are well enough to belt out the intricate harmonies that made them famous.

The finale part of the concert once again showcased personality-driven solo talent. Soul-influenced Jazz covered Marvin Gaye’s “Let’s Get It On”; smooth and eccentric Nokio covered Prince’s “I Would Die for You”; newcomer Tao flexed on Gnarls Barkley’s 2006 super hit “Crazy.” However, the unexpected frenzy of the night hit the crowd when Sisqo joined with the group and two background dancers to perform his 2000 hit “Thong Song.”

As fun as those solo hits may be, Dru Hill prove their power as a tight quartet with movement and meaning in their themes of fun, love, and heartache.