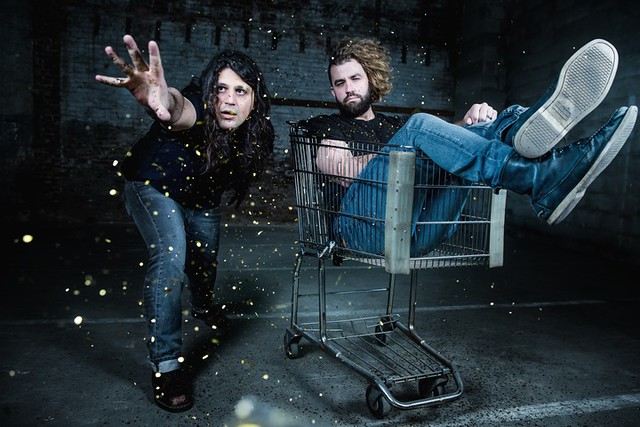 Brick + Mortar put on a great show at DC9 on Saturday, Aug. 19. If the band simply sounded as good as they did, I would have walked away happy. But the duo did even more than that — including a fun use of props.

Brick + Mortar consists of Brandon Asraf (bass, vocals) and John Tacon (drums, electronic samples, vocals). Richie Brown also toured with them to provide sound and to manage the props. That’s right, there were props! More on that in a moment.

This was a fantastic show. The duo were nearing the end of their summer tour, but you wouldn’t know by the high level of enthusiasm in the show. Brick + Mortar recently released a remastered edition of their 2015 EP Dropped, titled Dropped Again, which also includes two new songs. Brandon and John are also working on a full-length album, which is sure to be as great as their last.

Brandon, John, and Richie came armed with various props, including two giant stuffed hands, an extra large balloon with one of their song titles on it, nipple tassels, a reaper costume, and more. The guys set up a projector showing abstract cartoon animations and videos synced with the show. They involved the crowd and the audience was happy to oblige with appropriate shenanigans.

Brick + Mortar put on a very fun show, but they took their music seriously. Both John and Brandon are extremely talented and their songs are well-written. The songs also have important messages and they are very appropriate for today’s times. Check out “One Little Pill” below, and you will see what I mean. I have to say I am a huge fan of this band, and I can’t wait to see them again.

DC9 is a great venue! It’s intimate, and it has good acoustics. I will go to see a show there anytime. That being said, the club decided to double schedule on Saturday so Brick + Mortar had to hurry things up, and it didn’t seem that they were able to play their whole setlist. It was kind of nice to see an early show, but I wish they had given Brandon and John a bit more time.

The band only have a few shows left this summer — tonight, Aug. 25, in Massachusetts and tomorrow in New York. But Brick + Mortar told the DC crowd they would be back soon, and I will be there when they are! Check out some of their music below, and mark your calendars if they are coming to a venue near you.