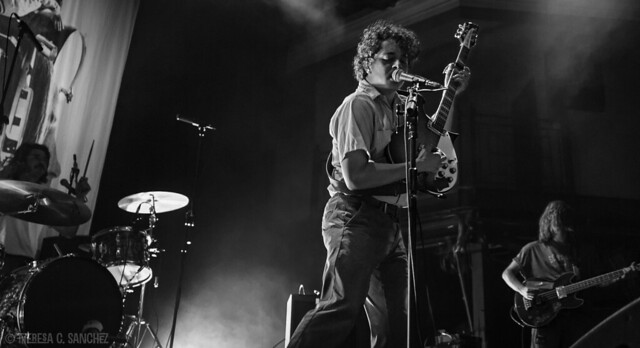 The Districts Refresh Dehydrated Fans with Tall Serving of Rock

“Hydrate yourselves: naturally, mentally, in every way you possibly can. Even, politically […]” said songwriter, multi-instrumentalist, and producer Sam Owens at the 9:30 Club in Washington, D.C., on a recent Friday.

Who better to advise on matters of liquid nourishment than the frontman for the New York-based band Sam Evian, who shares part of its moniker with the French brand of premium (see what I did there) mineral water that boasts the tagline “Live Young.” Given the demographic of the audience, he was spot on.

The clever Saddle Creek indie outfit was the second of three groups that performed at the legendary nightclub Aug. 18. While the headlining band, The Districts might be currently touring overseas in the UK, the ringing in many a fans’ ears still lingers. Even those armed with earplugs would be hard-pressed to forget such a killer indie label mini showcase. You simply can’t beat $20 for three bands on a Friday night downtown.

This was the fourth of five North American shows the guys played on the upper East Coast before heading overseas. Each of the groups were on tour promoting their most recent releases. The opening act, Soccer Mommy, debuted Collection Aug. 4 via Fat Possum Records — a label first for the bedroom pop Bandcamp darlings. Sam’s most recent offering “Need You,” the single from a three-song Chris Cohen collaboration, hit stores the day before the concert. The Pennsylvania rock quartet at the top of the bill delivered their third full-length LP, Popular Manipulations, on Aug. 11 with the aforementioned Mississippi label. They’re in good company — everyone from R. L. Burnside to The Black Keys has worked with that blues-heavy brand since it launched in 1991.

Now that you’ve been brought up to speed, let’s talk show specifics for The Districts.

A large cloth backdrop draped behind the stage featured an amalgamation of the cyanotype brushed images similar to the album’s artwork. Dark lighting and  blue overtones set the brooding tone for the emotionally-charged rock n’ roll production. The four unassuming young men from Lititz, voted “America’s coolest small town” in 2013, walked casually on stage at about 10:30 p.m. The later set set time seemed to surprise some older attendees (especially since no schedule was provided online), but overall the crowd was eagerly awaiting the quartet’s arrival to help usher in the weekend.

The Districts began with the first song off their new album, “If Before I Wake.” It’s a powerfully-packed track with a throbbing beat and vocal style eerily reminiscent of The Killers‘ Hot Fuss-era garage rock. Were Brandon Flowers and lead singer and guitarist Rob Grote both friends with Jenny?! The severe thunderstorms and flash flooding which tore through the city earlier that evening aligned almost perfectly with the lyrics. It’s as if the men were supercharged by the lightning’s lingering electricity — but it’s really just how they’re wired.

The band didn’t stop until their after their third song. Rob emphatically thanked the audience and recognized the first two groups. “Thank you so much for coming. This is great! It’s good to be back in Washington, D.C.” Their set focused mainly on their newest material, but they did play several from 2015’s A Flourish And A Spoil, like “Young Blood” and “4th and Roebling,” which is “named after the intersection in Brooklyn where they parked their car for their first New York gig.”

The furious full-bodied physicality each musician brought to playing their respective instruments ensured even the tiredest eyes in the room would remain fixated on them as they navigated the illuminated rectangular stage. Beads of sweat formed on Rob’s brow and dampened the back of his button down shirt. Taking heed to Sam’s previous suggestion, he replenished his fluids with water and beer (a big deal, since he’s finally of legal drinking age).

Drummer Braden Lawrence and bassist Connor Jacobus have played alongside Rob since their years at Warwick High School.  Pat Cassidy, the guitarist (not to be confused with the veteran broadcast journalist),  is the most recent member to join the group (replacing Mark Larson who left to attend college). The way Pat heaves his Gibson Les Paul II makes it appear as light as air, but it’s actually rather substantial. Rob told Minnesota Public Radio’s “The Current” that it’s actually his guitar he let Pat play because it was too heavy for his back. “It’s a reissue of one Les Paul actually designed. Pat admitted: “And now it’s way too heavy for my back, but it’s better than any other guitar that I play.” About 10 different pedals were situated at his feet during the gig, with one the same color pink as the horse head emblazoning their official T-shirt for sale at the merch booth.

Rob’s current guitar of choice is a gorgeous Rickenbacker 620 he got for a real bargain. If you looked closely (and fast enough) you’d notice that his short finger nails were painted a light blue hue.

Towards the half-hour mark, the group took a longer break to banter and recollected themselves. Pat and Rob waxed nostalgic while Connor finally looked up from his bass, his face no longer obscured by a mop of shoulder-lenth hair. Here is a bit of their random musings, where they essentially finished each other’s sentences and tuned their guitars.

Pat: Thank you.
Rob: Thank you very much. [A fan screams: “Absolutely! Absolutely!’] How y’all doing?
Pat: Woah! Thank you guys.
Rob: Aaaahhhh—oohhh.
Pat: Oh yeah.
Rob: Oh yeah.
Pat: DC baby.
Rob: DC – straight up.
Pat: Remember – oh God. Oh man. Do you guys remember Flappy Bird? [Prompted a small amount of applause]. Those were the days, huh? Everyone was just playing on their iPad and just flapping away. Obama was president. [Elicited a few audible claps]. Everyone was just flapping away all the time? Those were the days. Uh, no more.
Rob: C’est la vie.
Pat: C’est la vie.
Rob: I speak French now.
Pat: Now all it’s supposed to be is emoji!
Rob: You know what else? American cheese.

A major show highlight happened to be one of their earliest and lengthiest songs from their self-released 2012 debut, Telephone (made while still in high school!) and a later reworked 2013 self-titled five-song EP. “Long Distance” ranks #5 in popularity on Spotify and just might be a new personal favorite.  It’s a catchy lament on the understandable unpleasantness of dating someone far away. It’s also a tune where Rob sounds a lot like Julian Casablancas of The Strokes. At the four and a half minute mark, it seems like the song is done — very much like “Someday” from 2001’s Is This It — and you’d think so given the clapping from the crowd. Their response has become a part of the live version of the song over the years. The participatory audience action replaces the quiet tick of Braden’s drumsticks hitting each other following a brief epic guitar solo.

The Districts have been compared to some heavy hitters in the alternative and garage rock scene. But make no mistake, they have paved their own unique path and certainly put in the time and effort. They weren’t an overnight success; no band with any staying power ever has been. Red Bull interviewed the group about their rise to “fame” a month after Time magazine listed listed them as one of “15 Musical Artists to Watch in 2015.” In his aptly titled article, “The Districts: From Basements to Bonnaroo,” Elliott Sharp pretty much explained the band as best anyone could with this succinct paragraph:

What he wrote in January 2015 has not just taken place, but continues to unfold. He totally called it. If you want no-frills, tell it like it is, impassioned rock and roll from real musicians who have been playing together for at least a third of their lives, look no further then these rural-bred boys (now men). Most of the concert setlist can be found here.

For those interested in owning a physical copy of Popular Manipulations or some of the band’s catalogue, Fat Possum’s online store has extended their August 25% off sale for a limited time. The special edition “sky blue” vinyl (including autographed copies) are sold out. The Districts return to the United States next month to finish the last 20 shows of their extensive international tour. Their first gig will be Oct. 4, with Modern Baseball in support of DIY singer-songwriter Daniel Johnston on his “Hi, How Are You” tour, at the historic Tower Theater in Upper Darby, Pennsylvania. That’s a show you don’t want to miss.

Wherever you get a chance to catch them live, The Districts is a band that will leave you thirsty for more. Here are some more photos of The Districts performing at 9:30 Club on Friday, Aug. 18, 2017. All photos copyright and courtesy Theresa C. Sanchez. 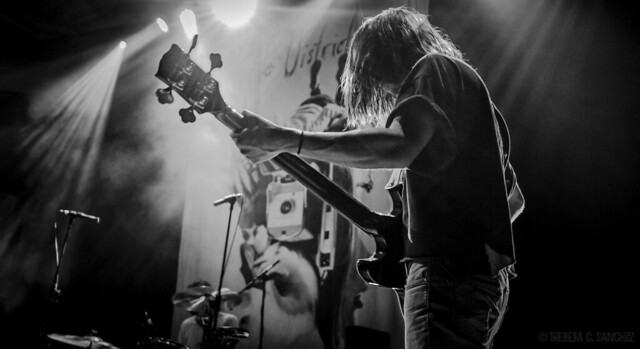 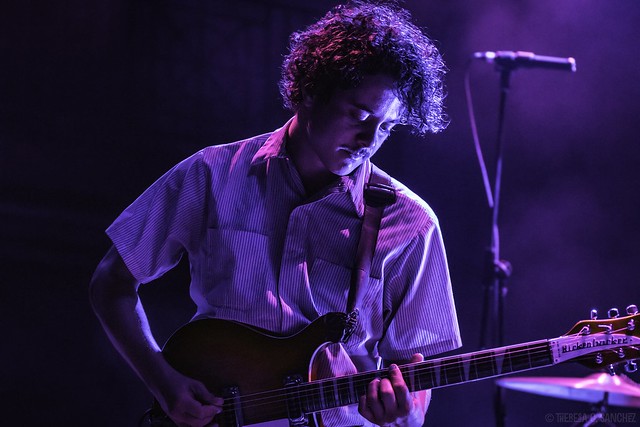 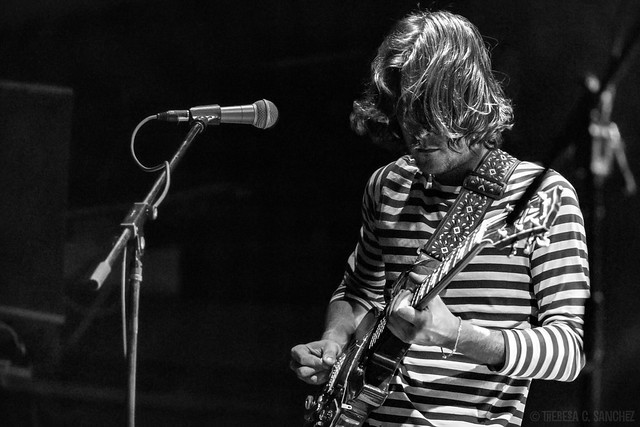 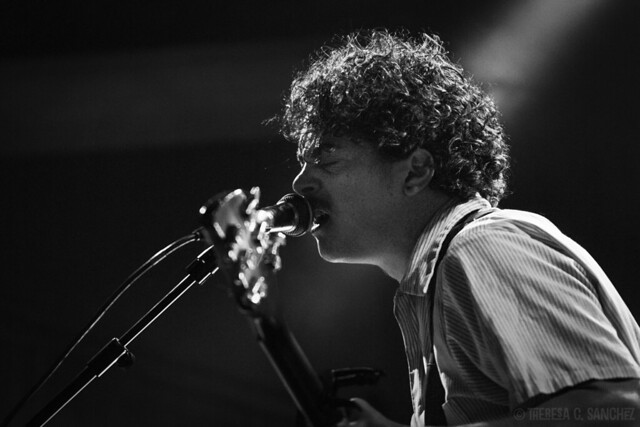 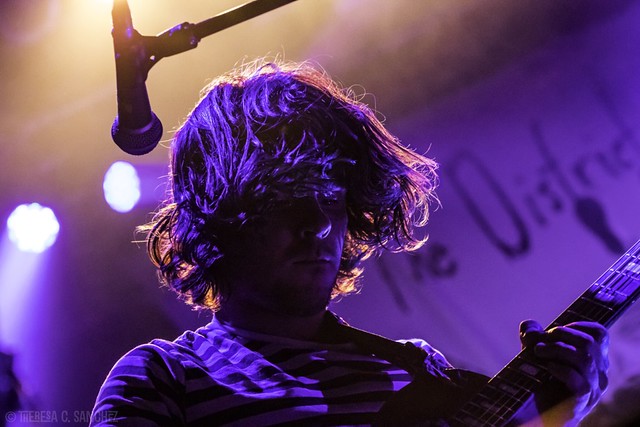 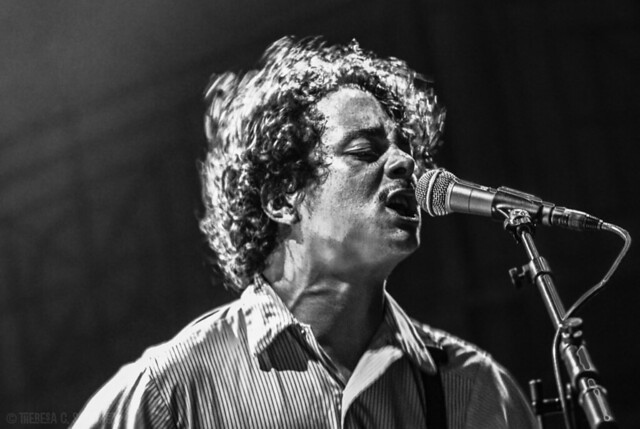 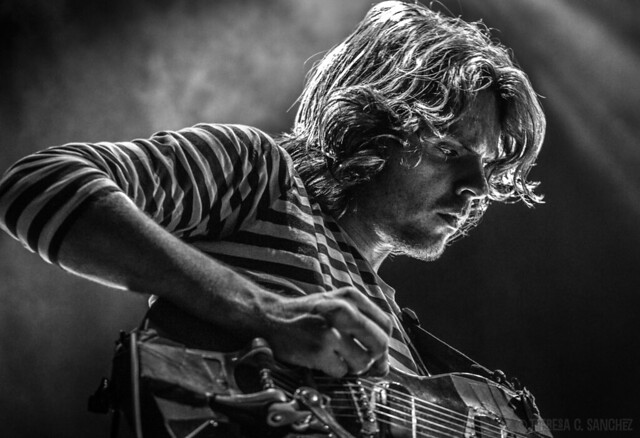 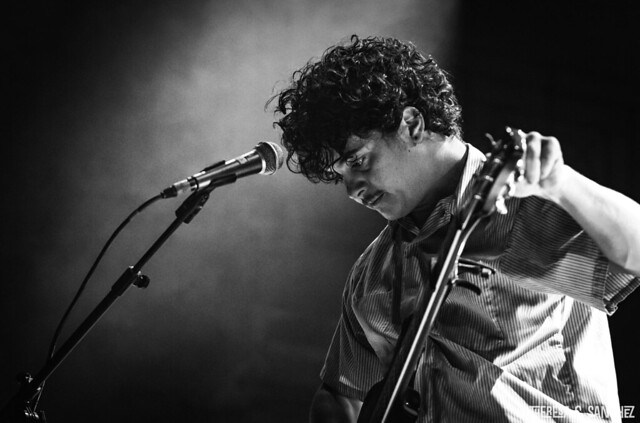 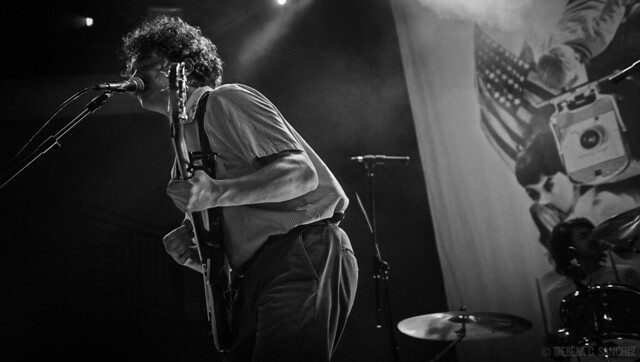 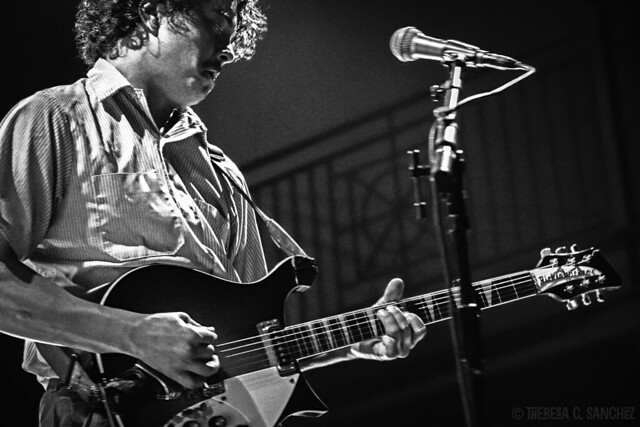