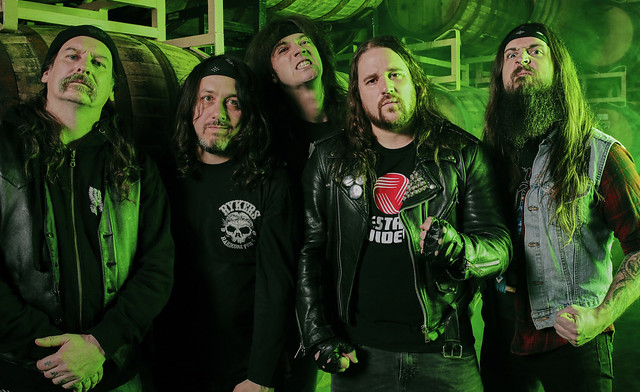 Hailing from nearby Richmond, Municipal Waste are hitting the road for dates in Philadelphia, Boston, and DC in December with their Nuclear Blast labelmates Nails. They’ll play at 9:30 Club on Sunday, Dec. 17. Back in June, Municipal Waste released Slime and Punishment, their sixth studio album, via Nuclear Blast, enlisting bassist Phil “Landphil” Hall to produce at Blaze of Torment Studios in Richmond.

Slime and Punishment proved to be a successful album for the band, debuting on the Billboard charts and setting a record in first week sales for Municipal Waste. The guys recently released a video for “Breathe Grease” from the album to celebrate.

In addition to Landphil, Municipal Waste includes Tony Foresta (vocals), Ryan Waste (guitar), Dave Witte (drums), and Nick “Nikropolis” Poulos (guitar). Tony and Ryan co-founded the band in 2001, and Nick joined in time to appear on the most recent album. Landphil and Dave, meanwhile, have been onboard since thrash album Hazardous Mutations, released in 2005.

One thing that’s remained the same over the years? Municipal Waste enjoys a good party! Buy your tickets online, and join the party at 9:30 Club.