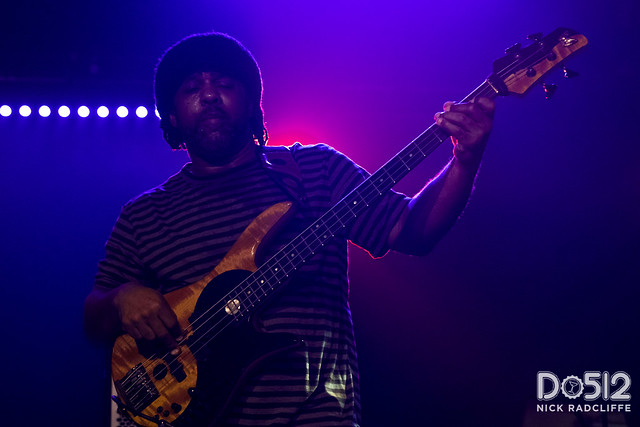 Victor Wooten is one of the best musicians on this earth. On Saturday, a packed 9:30 Club got to enjoy Victor’s talent on full display.

Victor recently released TRYPNOTYX, his 10th album, through his own record label, Vix Records. The album features Victor, as well as saxophonist Bob Franceschini and legendary drummer Dennis Chambers. The trio has been touring since the end of September in support of the album, and they made their final stop in DC.

The Victor Wooten Trio calmly took the stage with the introduction track “Take Off” playing. Victor then personalized the evening by speaking to the crowd before they started playing. The trio opened with “Dc10”, a high energy tune of the new 14-track album.

The guys proceeded to put on an unforgettable night of music. This was one of the best shows I have ever seen! Many were there to see Victor himself, but the added treat of getting to see Dennis Chambers cannot be discounted. He is a fantastic drummer, and the DC audience was not shy in showing their appreciation. Throughout the night, Victor soloed and at least twice the others left the stage while he performed. This was to be expected, and the fans would have been disappointed if they did not get some alone time with Victor. There were several points at which he had the crowd roaring and shouting with his performance.

On top of being an amazing bass player, Victor is a very down-to-earth and loving soul. During the encore, he spoke about bombs and wondered why no one has created a “love bomb.” He went on to talk about how music fills that need. As people were entering the venue, Victor walked right in the front door next to the line of people and even stopped to talk to someone he knew. You really don’t see that sort of thing with musicians that have reached his level of success and ability very often.

In 2000, Victor established Victor Wooten’s Center for Music and Nature, a retreat located on a 147-acre piece of land in Tennessee where he holds music classes in the spring and summer. This guy is the real deal. I can’t say enough about Victor Wooten or this performance. Check out his music, but also check out Victor Wooten the person. He is more than the music. Heck, he even has a TedTalk.

The world needs more artists like Victor. I don’t think it’s any coincidence that he has such a positive attitude and mindset, and he is also one of the greatest bass players to ever live. His life and his music are intertwined and that’s what makes him so great.

At the end of the show, Victor mentioned that he may tour again in January. Keep your eyes peeled for Victor Wooten coming to your town. His funky, jazzy music combines with a full demonstration of what makes him one of the best. You will leave wanting more. Until then, check out some of his music below.