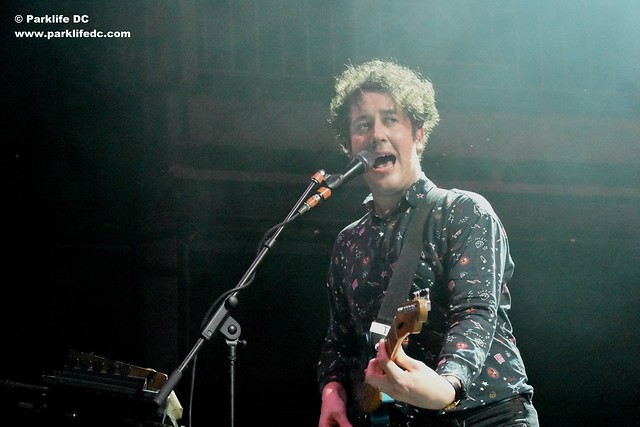 Matthew Murphy, vocalist of The Wombats, dedicated “Turn,” his band’s latest single, to his newlywed wife during his show on Monday before launching into the sunny song and its salute to love.

The sold-out audience at 9:30 Club was eager for the new single, and delighted squeals greeted the announcement of the song, which came toward the end of a set where the upbeat UK post-punk trio reminded us that they are a really damn good live act.

The Wombats launched a US tour at 9:30 Club, playing new songs from Beautiful People Will Ruin Your Life, their upcoming fourth studio album set for release on Feb. 9. The band began the show with “Cheetah Tongue” from the new record, but it wasn’t long before they were pounding out songs to which the crowd knew all the words — songs like “1996” from second album This Modern Glitch and “Kill the Director” from debut A Guide to Love, Loss, & Desperation.

Murph, who now lives in Los Angeles, really fired on all thrusters, projecting clearly while playing a frenetic guitar and occasionally also keyboards. His wry lyrics spread like fire among enthusiastic dancers, who shouted “This is no Bridget Jones!” in response to Murph’s humorously mournful cry of “If this is a rom-com, kill the director!”

The band also showcased its popular third album, 2015’s Glitterbug, as they played songs like “Emoticons,” an ode to how the popular messaging symbols can fail to soothe much like words during a fight. As the guys pounded their instruments emphatically during the chorus, bassist Tord Øverland Knudsen jumped from his station at stage left and bounced across the stage while continuing to perform.

Tord, the “Viking” member of The Wombats (who met and formed in Liverpool in 2003), was as ever an energetic player. Far from being rooted stoically like some bassists, Tord made the stage his playground, and he would parade, strut, jump, and dive around the platform as the beat moved him. He’s surely the secret weapon of The Wombats. Once you think you have their rhythm, Tord will literally shake it up and zoom around the room with a proud grin on his face to add extra vitality to a song. He stood still really only long enough to play keyboards when forced to do so!

Watch The Wombats perform “Lemon to a Knife Fight” from their new album acoustically for Good Day DC on Fox 5 DC on Monday.

In the middle of their show, The Wombats played crowd-pleaser “Tokyo,” and the audience was sing-shouting along to “If you Love me let me go/Back to that bar in Tokyo!” while drummer Dan Haggis triumphantly rained down blows with his drumsticks. Dan maintained a powerful beat in part by getting into a graceful flow that appeared to take him in a wide circle around his drumkit, and “Tokyo” was exactly the sort of song that harnessed that power. Overall, Murph, Tord, and Dan made for a great team, and their performance was quite tight indeed!

The Wombat’s 2007 first album still resonates with a lot of their fans, and so it’s no wonder the band closed their main set with escape song “Moving to New York” and began their encore with the raucous dance tune “Let’s Dance to Joy Division.” Amusingly, a stuffed wombat doll sat on the speakers in the rear of stage right for the entire show — until the encore. When the encore came, the toy was missing, but a costumed “wombat” bounded onto stage and danced around as if to Joy Division as the guys played their instruments. The scene rather inspired a chuckle or two.

Here’s the full setlist by The Wombats as it appeared on their flyers:

The Wombats continue their tour by moving to New York — and performing at Brooklyn Steel tonight, Jan. 10. The band remain in the United States as they cross the country to Portland, Oregon, on Jan. 29. Undoubtedly quite a few of those shows have sold out, but get a ticket if you can. The Wombats are an amazing live band, and their songs truly come to life in concert. You don’t really know The Wombats until you’ve seen them completely dominate a stage. 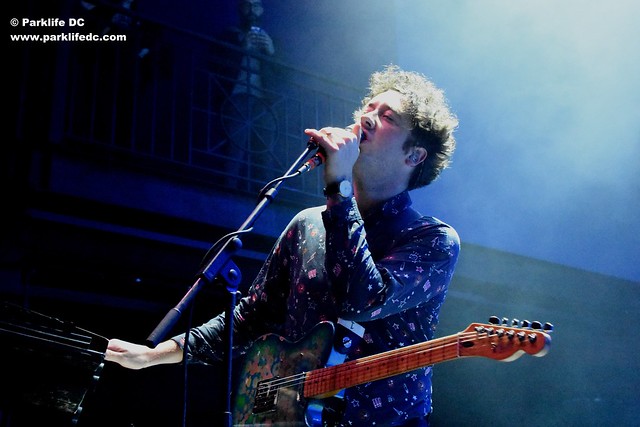 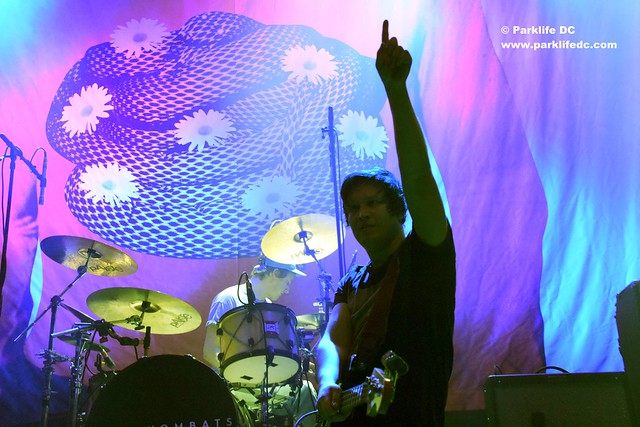 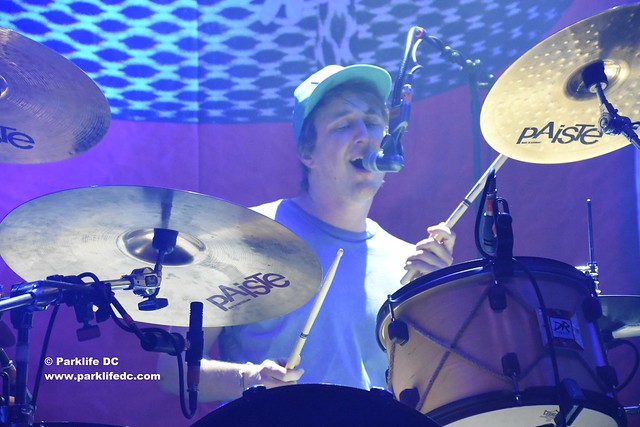 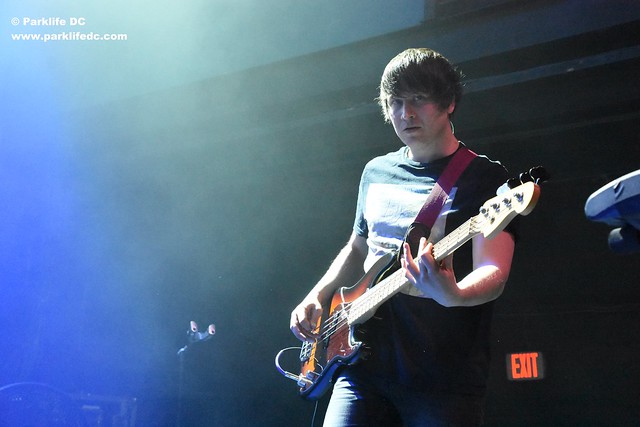 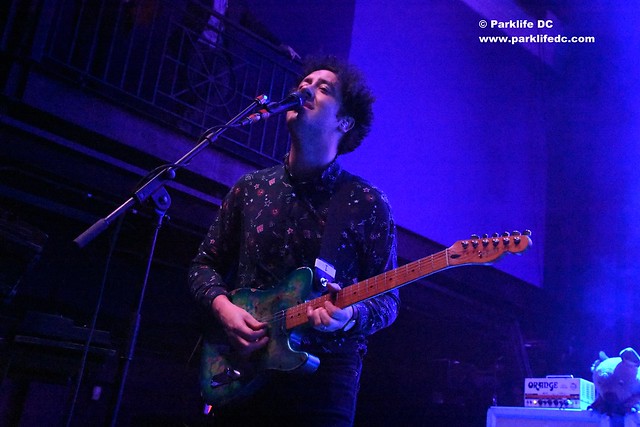 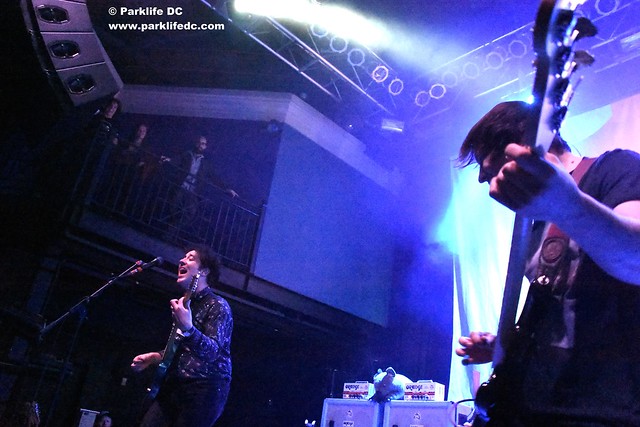 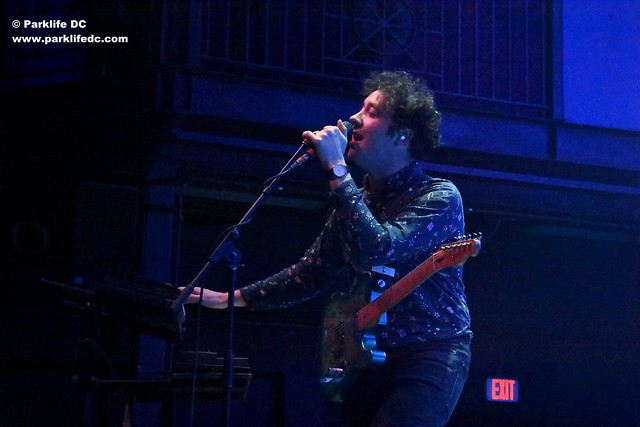 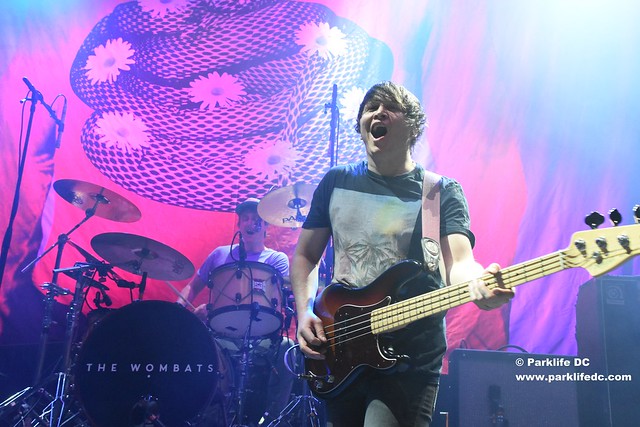 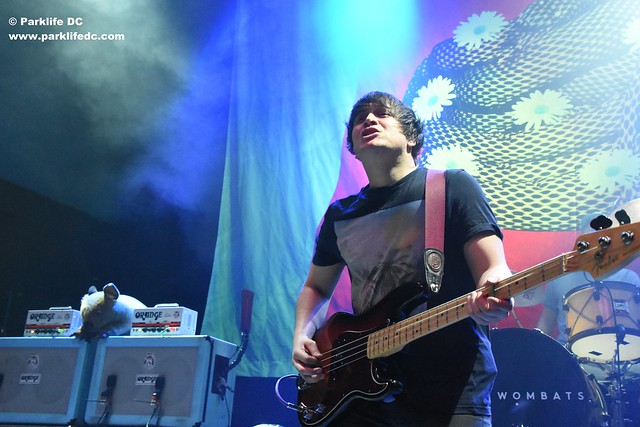 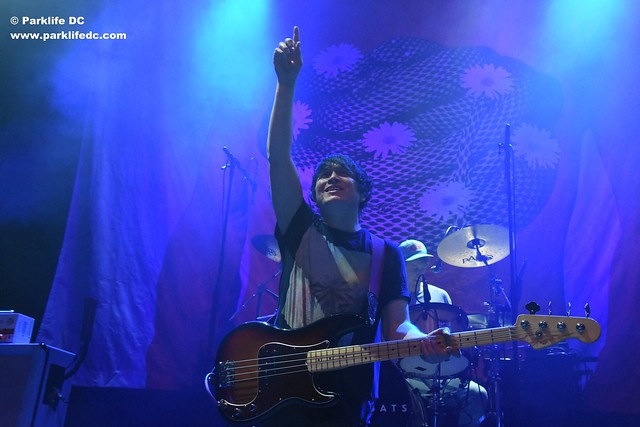 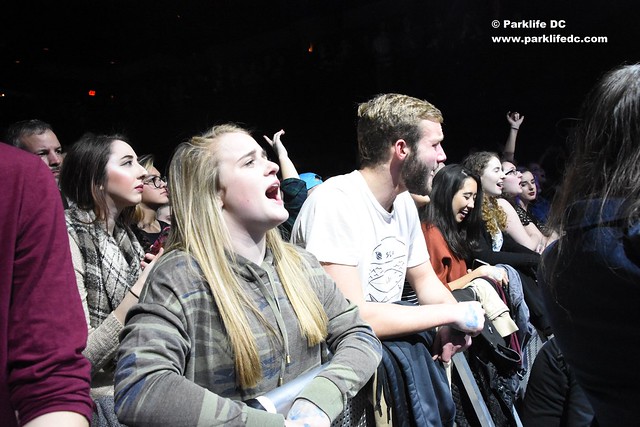 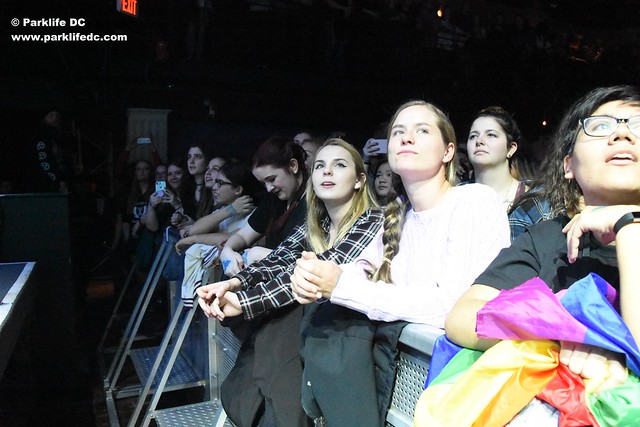 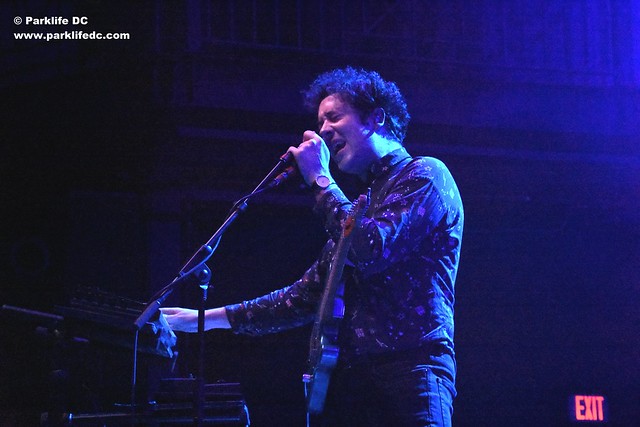 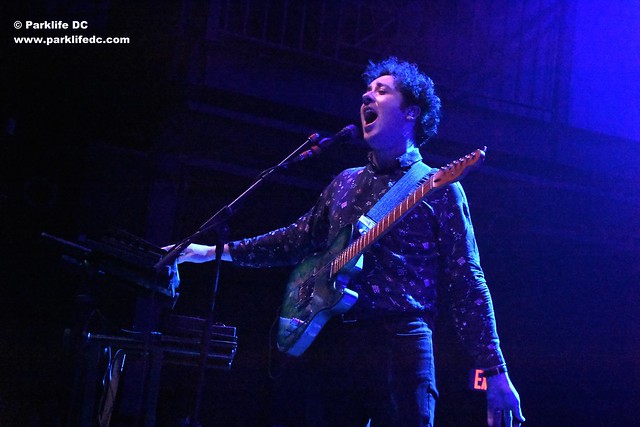 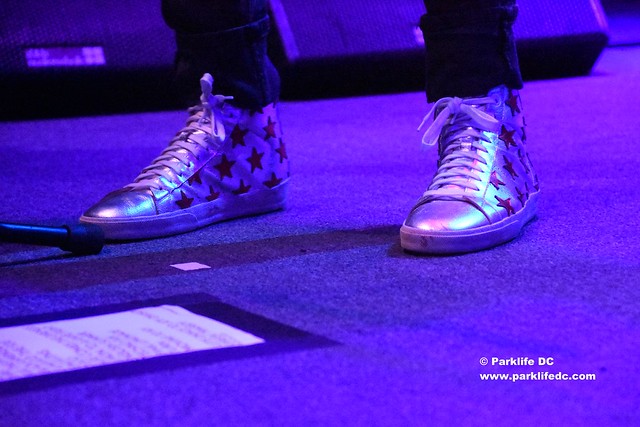 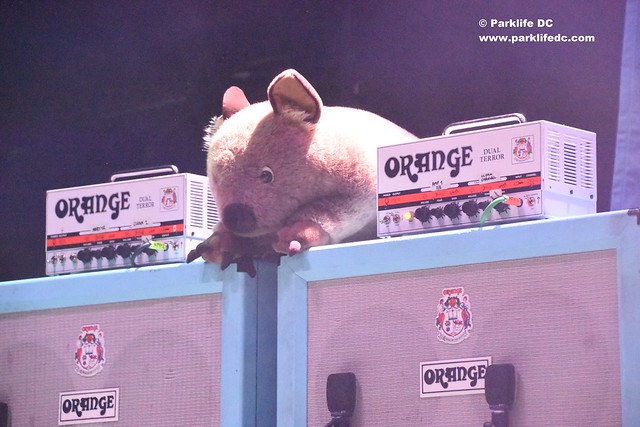 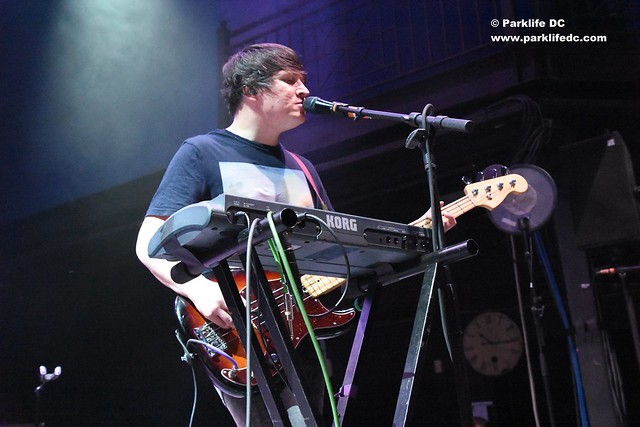 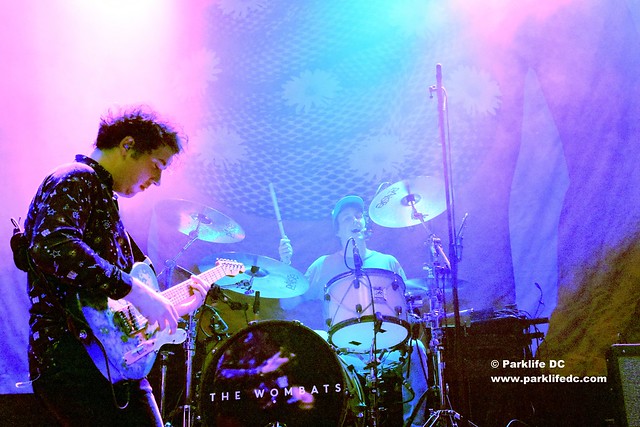