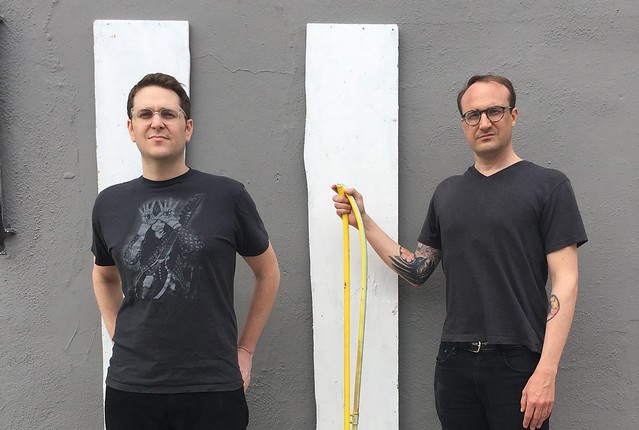 Etxe Records, named for the word for “shelter” or “home” in Basque, celebrates its 10th anniversary in 2018. To mark the occasion, the label released Etxe Records at 10 Years: A Compilation on Thursday, Jan. 18. Bands from Etxe Records also will perform in a Etxe Records 10th Anniversary Showcase at Capital Fringe (Logan Fringe Arts Space, 1358 Florida Ave. NE, DC) on Saturday, Jan. 20.

To explore the label and its bands in its 10th year, Parklife DC chatted via email with Chris Goett of Silo Halo and Avy Mallik of Near Northeast, the first of whom also is a co-founder of Etxe Records. Near Northeast and Silo Halo will be joined by fellow labelmates The Red Fetish and Teething Veils for the anniversary showcase concert.

Mickey McCarter: How do you describe the roster at Etxe Records for those listeners first getting to know you? How is Etxe similar or different than other DC independent labels?

Chris Goett: When we started Etxe 10 years ago, we thought about artists that had compelling points of view and crafted songs in a way that made sense to each artist.  We’ve kept to that ethos hence not limiting our roster by genre.  It’s really about compelling ideas and how they manifest themselves in song form.  The day-to-day of running a record label that increasingly becomes more of a collective is rewarding and nuanced.

Avy Mallik: To me, the strength in Etxe’s roster lies in its diversity of styles and influences. Over the past decade, many of the Etxe bands have had a DC post-punk aesthetic, but at the same time have balanced that sound with acoustic folk, electronic, and other divergent sounds. I think Etxe is unique in that it is entirely artist-driven — Etxe leadership consists of the band members, and the studio that Greg Svitil from Etxe runs (Empress of Sound Studios in Petworth) is in the basement of Greg’s house — it’s literally an in-house label!

MM: What’s the significance of the upcoming compilation album — Etxe Records at 10 Years: A Compilation? What can you tell us about the album tracks?

CG: The compilation celebrates our diversity and process.  How we got to this point is equally important to arriving at this moment in time.  This comes through in the range of sounds, textures, and songs.

AM: The album, which is available for purchase here, and streaming here, showcases new and/or unreleased music and alternate mixes of tracks from all the bands that were part of the Etxe label through the years. Some of the songs, like our own song “Clusters,” were recorded specifically for the label release, and it’s cool to hear it stand next to other great but totally different tracks like “Oragami” by Fangs Out and “Suspicion” by Girl Loves Distortion. It’s a sonic adventure.

Listen to “Clusters” by Near Northeast on Soundcloud:

MM: Hand in hand with the album, you have a release show celebrating Etxe during Capital Fringe on Jan. 20. What can we expect from that show?

AM: We’re really excited to be back at Capital Fringe, a venue that has been a bedrock for creative people in DC for several years. It’s going to be a really special show. For Near Northeast, we will have our friend Isabelle play cello on a few tracks, including on our new instrumental song “Feuilles,” which we recorded for our second album True Mirror but held off from releasing until this compilation. We’re also really excited to perform with Teething Veils, backing them up on their epic 20+ min song “Constellations,” which has never been performed in this configuration. That album by Teething Veils may be one of my favorite releases to come out of the DC music scene in the past few years, and one reason I was so excited to join Etxe.

CG: Celebrating our 10 years at the Capital Fringe feels wonderfully hand-in-glove for all the excellent reasons that Avy states above. For Silo Halo, we are releasing our third full-length LP on Friday, Jan. 19; therefore, the showcase has a double rewarding aspect for us.  I expect an evening of music that provides live cross-section of our label that mirrors our compilation.

Stream Etxe Records at 10 Years: A Compilation on Spotify:

MM: How does Etxe expand its audience as an independent label? Do you stream or make music available online? Or do you have other tactics?

AM: The internet has been a great democratizing force in sharing music. We absolutely stream and make music available online for download. The entire Etxe catalog is available here, and you can learn about the Etxe bands on our website here. When we play shows or go on tours or contact music publications, we pool our resources — and having access to Greg’s home studio Empress of Sound is a huge plus.

CG: The manner in which individuals listen to music has shifted drastically in our 10 years of operations. We’ve done our best to adapt to these avenues while maintaining physical releases (including vinyl) when possible.

MM: What’s next for Etxe?

AM: We’re just about to talk about that later this week — hopefully more music and creative collaborations that showcase the diversity of Washington, DC and its environs. Stay tuned!

CG: Adding to Avy’s thought, I live in Los Angeles and hope to bring similarly-minded artists into the family when it makes sense and feels right. We’ll continue to democratize our processes to better weather the ever-changing music production and distribution landscape.

Pay for the Etxe Records 10th Anniversary Showcase at the door. For more information, visit Etxe Records’ website at http://www.etxerecords.com.