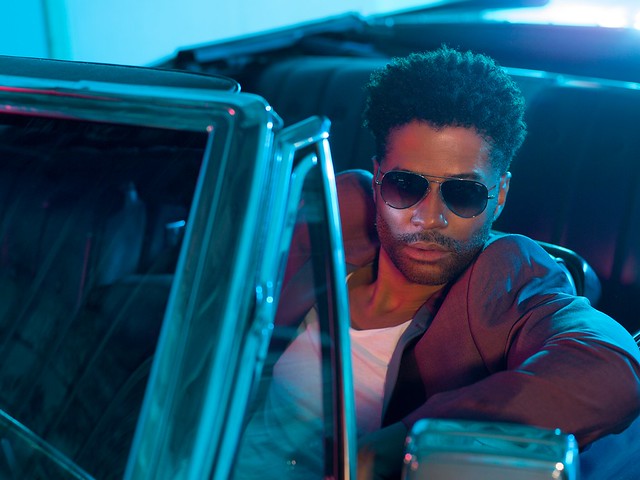 The Love Song Is Here to Stay: Eric Benét

A standard English dictionary likely defines “singing” as the ability to create musical notes and sounds with the use of the human voice. Meanwhile, the soulful current of barbershops, hair salons and R&B-dedicated forums gladly define “sangin’” as the ability to sing but with mandatory diaphragm use, grit, passion, and pure confidence! R&B veteran Eric Benét provided The Birchmere with a dose of sangin’ on Jan. 17, in the first of two crowded shows, with seated couples and live videos aplenty.

To credit his almost 25-year career, Eric understands the meaning of professionalism and respect to his fans. He entered the stage punctually with the performance of two singles, “Love Don’t Love Me” (2001), a midtempo number, nodding to heartbroken-driven casual sex. Conversely, the second single “Spiritual Thang” (1996) shifted the crowd to a theme of deep romance, and the likes of his talented keyboardist/background vocalist John Richardson.

A smooth talker at heart, Eric took the performance to “Chocolate Legs” (2008), and lucky women of the evening received customized greetings based on their milk chocolate, light chocolate, or as one woman shouted “Godiva” skintones. The melodies of the song served as a kind of greeting also: “Chocolate Legs” marked the first of many sessions where Eric used his low register to stomp the floor, only to glide up to his high register to pierce through the ceiling.

Remarks and gratitude marked the transition to the middle of the show for his fans, otherwise known as “EBs.” After the performance of his breakup anthem “When You Think of Me” (1999), three women screamed his name so loud that he dubbed them his alarm clock. Eric dug deeper into his catalogue to visit the 1996 single “True to Myself,” which is a bluesy neo-soul track that explores themes of self-empowerment and positivity.

Donned in a blazer-denim jean-sneaker trifecta, Eric assumed the role of youth musical director during his performance of “I Wanna Be Loved” (2005). He playfully assigned lyrics for men and women to sing to each other, which turned out to be friendly competition in blending voices. That activity set the stage for his next performance of the Grammy-nominated and chart-topping single “Spend My Life with You” (1999). The performance did not feature Canadian singer-songwriter Tamia, but he reminisced about his excitement to collaborate with a former crush.

The latter part of the show featured Eric Benét in a moment of reverence to deceased artists and former influencers: David Bowie, Natalie Cole, George Michael, and Prince, who all shaped his sound and apparent affinity to embrace sensuality. Eric paid tribute to Prince with a cover of “How Come You Don’t Call Me Anymore,” which included the signature shrieks and squalls — which were met with handclaps and shouts from wowed fans and servers alike.

The next two performances gave the crowd a chance to simmer down and cuddle with Grammy-nominated singles, “You’re the Only One” (2008) and “Sometimes I Cry” (2010). A youthful trickster at heart, Eric returned to the stage to close the show to dance and take selfies with the performance of the Faith Evans-assisted “Georgy Porgy” (1999).

In support of eight studio albums, Eric is on the road as a tour act. “EBs” and new fans alike can review his most recent album, Eric Benét, released via Jordan House and BMG in 2016. It’s an album that continues his cool, calm, and collected brand of adult contemporary R&B. For more information, including Eric’s upcoming tour dates, visit https://ericbenet.net.