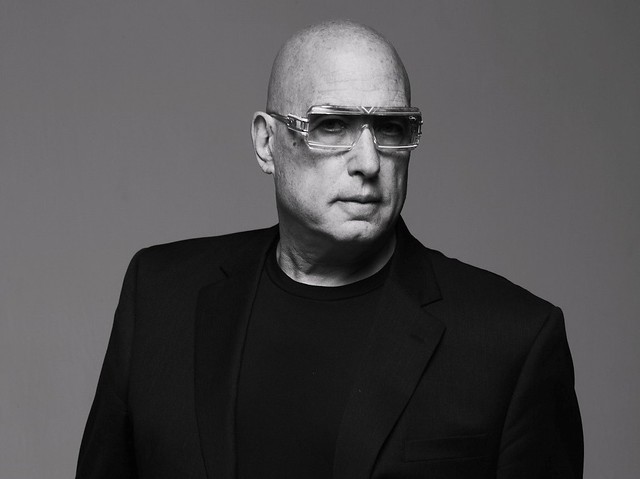 Mickey McCarter: Tell me a bit about the Celebrating David Bowie show? What are we going to see when we go?

Mike Garson: It’s very exciting to me because I’ll have several alumni [of David Bowie bands] with me — myself on piano and Earl Slick on lead guitar. He was with David Bowie from 1974 until our last tour in 2004. I have Gerry Leonard, who is our ambient guitarist, with us. He toured with us during the Reality Tour in 2003 and 2004 and the Heathen Tour in 2001. He’s a great guitarist!

We’ll have Carmine Rojas on bass — he played on “Let’s Dance,” “China Girl,” and “Blue Jean,” and he did the Serious Moonlight Tour and the Glass Spider Tour. Then, we have some great singers like Bernard Fowler, who was a backup singer for the Rolling Stones for 30 years, and he has his own career as a soloist. We have Gaby Moreno from Guatemala. She sang with us last year on Celebrating David Bowie, and she has an amazing voice. On some concerts, we have Joe Sumner, who’s Sting’s son, and he’s an amazing singer. And we have Paul Dempsey, who is very famous in Australia for the band Something for Kate. I like his musicianship and his singing.

These people all resonate with and love David Bowie, and that’s why I have chosen them. On drums, we have Earl Slick’s son, so we have another generation that love David.

There will be special guests in different cities, so that’s exciting too. Some of the names are still coming onboard. Gary Oldman might jump in with us in Seattle. That’s the only day he’s available because he’s up for an Oscar four days earlier! 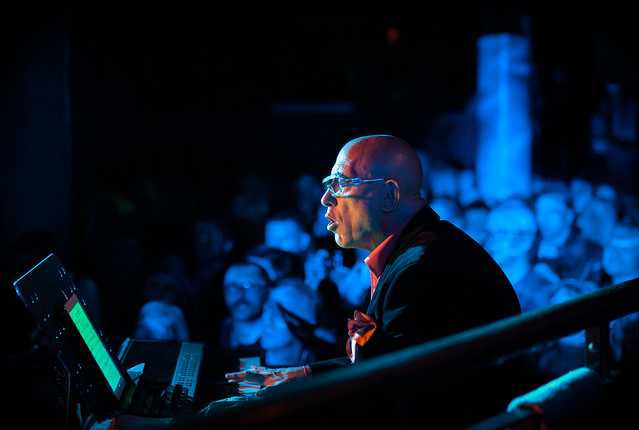 MM: You guys just did your European tour. How did that go? Were there any surprises? I imagine when you’re playing all of these different songs from throughout David Bowie’s career, you might find that something particularly resonated with you or the audience? Or maybe there were experiences during that tour that stuck with you?

MG: It was a great tour. We just got back days ago. We had concerts in Paris and London and Dublin and Berlin. It was a great band. Half of those musicians that were with me then are with me now, and I have some different ones as well. For the most part, the shows were all sold out. There were incredible audiences literally singing every word to every song, which is really where I get my joy. I know the music; I played 1,000 concerts with David Bowie over 20 albums. To be able to hear and see the amount of applause, which rivals what we got with David Bowie, is very rewarding to me. It shows me that it’s cathartic for all of us as a group. He was the soundtrack to the lives of all of these people.

After one show, a woman hugged me for three minutes, shaking and crying because she was so touched by the music. That’s almost unreal to me except that I see it everywhere I go! He affected very famous singers, all of whom have told me their stories, as well as the fans. It’s a mission for me to be the music director, emcee, and producer of this show. I need to keep this music going because so many people like it. I like it, and I got to play it with him.

MM: You referenced the Reality Tour and some of the musicians who played on that. I don’t think at the time, anybody ever imagined it would be his last tour, right? Do you have any thoughts as to being a part of that experience? And maybe a recollection as to the last time you saw him?

MG: The last time I saw him, he had a heart attack when we were on stage [June 25, 2004] in Hamburg, Germany. It was scary beyond belief. He finished the show with a heart attack occurring! They zipped him to the hospital and saved his life. That was the last time we saw each other in person.

We emailed up until a few months before he passed in 2016. For the tour, we had finished 113 concerts already, and we had another 13 shows to do. It was an incomplete cycle that seemed unfinished to all of us in the band. To leave that way was always disturbing to me. On top of that, he passed away and he was never again able to go tour. It’s a very discomforting feeling for me, but that’s life and it’s what happened.

From a selfish viewpoint, by playing this music, it is helping me finish something we started. 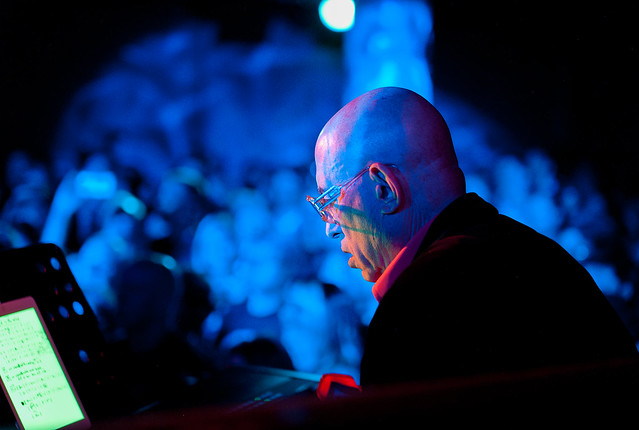 MM: Was there any discussion of touring again?

MG: Yes! Yes! Yes! We had some talks with Brian Eno before he passed about finishing a trilogy with the Outside album because he always wanted to do two other albums. I played with Brian and Reeves Gabrels and Sterling Campbell and Carlos Alomar.

He wanted to do two more albums, and he was actually talking about it. That was very exciting for me because that was one of my favorite albums with him, and I co-wrote “Heart’s Filthy Lesson,” “A Small Plot of Land,” and a bunch of others with him. To do more of that would have been very exciting.

Truthfully, it was an improvised album for the most part. He put the album together with Brian Eno from what we had recorded for 45 hours. That’s my favorite way of creating music, so I was looking forward to that.

But in my heart of hearts, I knew something was wrong. I didn’t have specifics. David was very quiet and private.

MM: When you talk about working with Brian Eno — wow! You were involved in so many milestone projects over your career with David Bowie, but that alone has to leave a deep impression on you. I love everything Brian Eno does and to be able to work with him in that manner must have been extraordinary.

MG: It was! I love the guy. We had some great talks. We are two opposite ends of the spectrum of crazy geniuses! It’s a funny thing to say, but we are so opposite. I’m playing a 9-foot Steinway piano in Switzerland at the recording studio in Montreux, and he’s behind me with an old synthesizer called the DX7 from the ’80s, and it’s a little box. I’m playing all of this virtuoso piano and classical stuff, and I hear behind me a little “beep-beep! beep-beep!” He is a “less is more” kind of character, and I’m a “more is less” kinda character. And that combination to me was hilarious and beautiful. It was a combination of two different talents from two different worlds. We joke about it.

MM: What’s next for you in the future? When you wrap these Celebrating David Bowie concerts, are there other projects you are looking forward to doing?

MG: I did a test run of six concerts in England last month of the Aladdin Sane album in order. And the second half of the show is a mixture of David’s stuff, familiar and unfamiliar. That’s the album I’m most known for, so I toured it in England last month. I used a female vocalist — Gaby Moreno — and I used Iggy Pop’s band, and it was very successful. So, I will do some of those around the world.

In addition to that, I have a whole career in the healing aspects of music. I’m writing a symphony of love right now, and a lot of my music is being tested on children with autism. I’ve been working with a brain surgeon and a neurologist on the healing aspects of music. I have a whole other life there, and then I have a life as a jazz musician. And I have a life as a classical musician. And I’m a teacher of music, and I’m giving masterclasses around the world at universities.

With David’s stuff, there’s the Celebrations and Aladdin Sane and some symphonic stuff with David Bowie’s music in the works. I’m going to do a jazz album with great vocalists who all loved David — people like Robert Smith [of The Cure], Joe Elliot [of Def Leppard], Simon Lebon [of Duran Duran], and others. It’s just going to be David’s songs with piano and voice, stripping it down to the bare basics. So, I have a lot of projects!

I would say 50 or 60 percent of my experiences going forward will be paying homage to David, and maybe 40 percent on this other stuff I have described.

MM: There’s quite a lot of thought on music therapy these days, it seems to me! It gets a lot more attention as a serious study these days, doesn’t it? It’s got a lot of credibility in helping people recover from trauma or adjust to things.

MG: It’s very powerful. It’s very effective. I wrote a symphonic healing suite that I debuted three years ago. I worked with a brain surgeon. We tested 30 of my pieces on 100 patients. They chose their favorite 12 pieces, and that became a symphonic healing suite that I wrote. A Parkinson’s patient asked me to write a tango, and she danced on stage — and she could barely walk when she wasn’t dancing! We saw the magical effects of the music and the healing. I would say you never want to give someone a false sense of hope in that music is going to replace radiation or other therapy say for a cancer patient or the like, but I feel the healing aspects of music have always been there. They first affect you spiritually, they next affect you mentally, and if you get lucky they can even help you physically, although that’s rarer. But if you can relax your mind a little more, your physical quotient for healing gets a little better.

MG: The Fillmore Silver Spring is our first show, and we are looking forward to seeing people there! We sold out our second night in Philadelphia already.

MM: We’ll see you there!