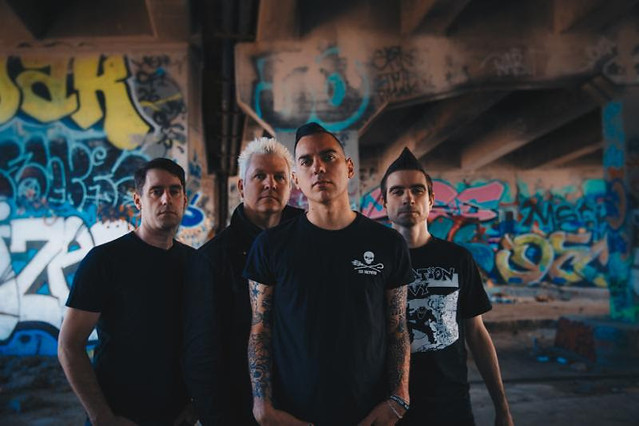 Pittsburgh punks Anti-Flag released American Fall, their 10th studio album, last year via Spinefarm. They have launched a co-headlining tour with Stray from the Path, and the two bands perform at U Street Music Hall on Saturday, Feb. 10, for their Silence=Violence Tour.

Anti-Flag released their first record in 1996 and since 1999 have consisted of Justin Sane (vocals, guitar), Pat Thetic (drums), Chris Head (guitar), and Chris No. 2 (bass).

Watch the official music video for “Finish What We Started” by Anti-Flag on YouTube:

As you would imagine, the guys were never going to be fans of the Trump Administration. And they explain why in a very articulate manner in their mission statement for the Silence=Violence Tour, reprinted here in full.

“The mission of the Trump regime has been clear from day one, the normalization of bigotry. Dangerous rhetoric has become dangerous policy that has put countless in harm’s way. It is the responsibility of all to be on the side of the marginalized and scapegoated and that is the goal of the aim of the Silence=Violence Tour.

“No longer can we allow people to sit on the sidelines in the fight for social and economic justice. Inaction makes you complicit. If oppressed people demanding space and dignity in our society is what is making you uncomfortable, perhaps it is because you are a bigot or fascist? We must spread empathy, not apathy. Our aim is to do that at every show we play across the US.

“Our society can maintain a status quo of violence and hatred, go back to masking that same hatred and violence in neoliberal wrapping paper, or forge a new society that is inclusive, egalitarian and just for all. It is our optimistic view, even in these dark times, that the latter is within reach.

“Each band on this tour is predicated upon an ethic of caring about more than just themselves. To carve out a few hours in a day, in each city, where we can be comfortable in our own skin… free from racism, sexism, homophobia, transphobia, islamophobia, bigotry of any kind… this is not an opportunity that any of us tread upon lightly. We’re excited to throw these small celebrations of unity in hopes that it can leave all that attend with a sense of community and organization that will help fuel our collective ability to create positive change and leave things better than we found them.”