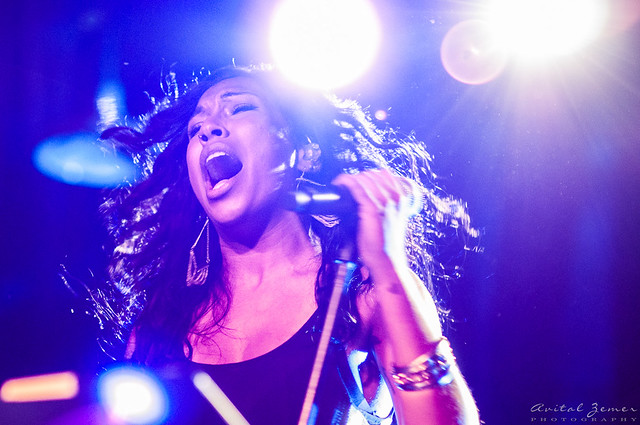 Dubbed our friendly neighbor to the north, Canada has a history of R&B generosity to the United States. Deborah Cox, Tamia and The Weekend are proof that the nation of maples is a credible musical partner, and 34-year-old Quiet Storm songstress and Toronto-native Melanie Fiona is no exception as we saw at the Howard Theatre recently.

Bottles, roses, perfume, and cologne filled the air for the Valentine’s vibe of the event on Feb. 13. Even with a start time of 8pm and no opening act, fans waited for her 8:30 arrival patiently, until Melanie graced the stage with her trademark long braid, dark lip, and megawatt smile. Her three-piece band remixed the 2009 single “Give It to Me” with a sultry bluesy arrangement that complemented her nondramatic, crisp style of singing. However, a background singer or two would’ve helped to add more color and projection to her sound, given the theatre setting.

It has been six years since Melanie’s last album release (The MF Life). Curious fans clapped, snapped, and nodded in support while Melanie took center stage and explained that in recent years she has ventured into mothering her first child, self-care, and ambitious goal-setting. Melanie explained that the name of her upcoming 2018 album, Next Train, indicates that everyone has to be onboard with her visions or on the track. Like she never left, Melanie cued the band to drop the sounding of “Fool for You,” the 2010 Cee-lo Green-led single that she served as a feature. Melanie held her part down with growls aplenty while the fans had a chance to be Cee-lo for an evening. The theme of longing and resentment concluded as Melanie lent her husky vocals to the Grammy-nominated, 2012 single “Wrong Side of a Love Song,” which included extended belts while she knelt into the audience.

Spunk, style, and sass cemented at the halfway mark of the show. Rock-kissed “Watch Me Work” (2012) featured a trap breakdown to which fans hyped Melanie as she hit a quick two-step and Nae Nae with her bass guitarist. To cool down, Melanie took center stage again to emphasize her personal need to balance vulnerability with messages of strength and social-consciousness for her diverse fans. And a performance of “Teach Him” (2009) delivered on that note. Melanie introduced a new song, “Love Needs Love,” which had a spoken-word tone. While Melanie delivered a message of world peace and slowing down, the song also interpolated the chorus of “The Light” (Common, 2000). Inspired and optimistic, Melanie took the liberty to deliver a festive vibe and nod her Guyanese heritage with the Bob Marley-sampled (WAR) performance of “Bite the Bullet,” in which she questions the loyalty of her lover.

Singing arguably her biggest single to date, Melanie featured gem and fan-favorite “4 AM” (2012) in the latter tier of the show — the song accurately narrated suspicions of infidelity. Fans from as far as Oklahoma received specialized attention and shout-outs. Per request she performed a cappella version of “I Been That Girl” (2012). Tenured and new fans alike went back to 2008 to the YouTube-era Melanie Fiona with a performance of the reggae cut “Somebody Come Get Me,” a number she described as inspired by a fiery episode of Snapped. In closing, Melanie expressed gratitude to R&B predecessors such as Donny Hathaway, Patsy Kline, and Otis Redding before she ended the night with her other biggest hit, “It Kills Me” (2009).