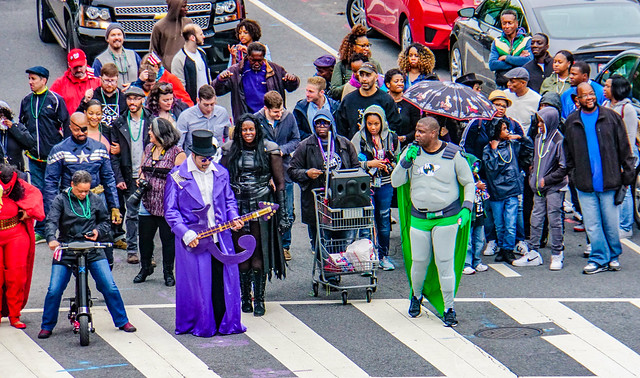 The following press release was published by Funk Parade on March 11. Parklife DC shares it in its entirety in support of Funk Parade’s crowdfunding effort.

A longstanding DC music institution has stepped in to help save a new one.

Chuck Levin’s Washington Music Center, the independent music and equipment retail giant which has called the DC area home for 60 years, has pledged to match new crowdfunding contributions to save the DC Funk Parade. The campaign can be found at https://www.youcaring.com/funkparade.

Funk Parade organizers announced last week that without an infusion of at least $60,000, the event was unlikely to take place this year, the event’s fifth. The annual Funk Parade and festival brings over 70,000 people to the U Street and Shaw neighborhoods for a day and night of music from dozens of the city’s best musicians and artists.

“The Funk Parade represents the heart of DC’s music culture and the soul of the city that’s been part of our existence for the past 60 years,” said Adam Levin, grandson of founders Chuck and Marge Levin. “Chuck’s” has helped produce Funk Parade since its inception, providing support and equipment. “When we saw it was in jeopardy we wanted to jump in and see what else we could do. This is the most impactful thing DC has to celebrate the amazing music and arts that are born out of this city. It has to go on.”

Launched last Wednesday, the Funk Parade crowdfunding campaign had raised over $10,000 by Sunday, still short of the amount needed to produce the parade. Chuck Levin’s has promised organizers it will match new contributions the campaign receives to ensure the Funk continues. “For this event to survive, DC’s business community needs to step up and save it,” said Funk Parade co-founder Justin Rood. “Chuck Levin’s pledge shows it can be done. If Funk Parade survives, it will be because of their generosity. We’re incredibly thankful for their support, and urgently hope others will follow their lead.”

Funk Parade is the District’s largest volunteer-organized celebration of music, arts and culture. Founded in 2013, the event is produced by a collaborative network of over 200 arts and community groups, churches, youth organizations and nonprofits. It’s supported largely by contributions and in-kind donations from individuals and local businesses, as well as grants from the DC Commission on Arts and the Humanities. The event is produced by All One City, a District-based 501(c)3 nonprofit working to improve civic engagement through arts and culture. Donations are tax deductible and can be made through the YouCaring crowdfunding platform. For more information about Funk Parade visit the event website at funkparade.com.

More information about All One City can be found at the website all1city.org.

Chuck Levin’s Washington Music Center is a family-owned and operated music instrument and equipment store located in Wheaton, MD. It is one of the largest single-location musical instrument stores in the United States and the largest servicing the Washington D.C. Metro Area. The company has deep roots within the D.C. Metro Music Community, dating back to 1958 when they got their start at 12th and H St. NE. Chuck’s continues to support music both locally and globally. It celebrates its 60th anniversary in 2018 and its commitment to music and its customers has never been stronger. For more information, visit chucklevins.com.