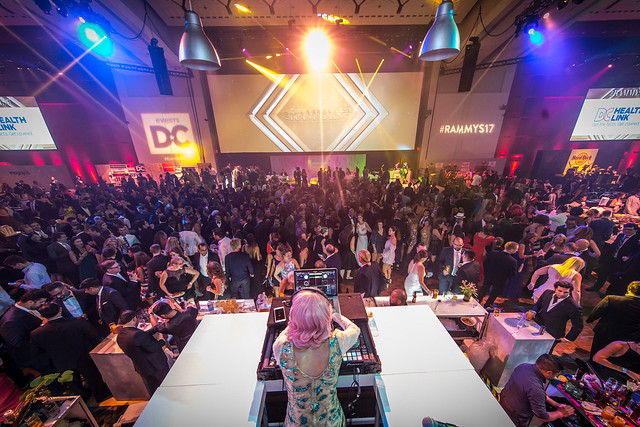 The reception at RAMMY Awards in 2017 (Photo courtesy RAMW)

The Restaurant Association Metropolitan Washington (RAMW) announced yesterday the revocation of two nominations for restaurants owned by Chef Mike Isabella for the RAMMY Awards on June 10 at the Washington Convention Center in the wake of recent sexual harassment charges against him and other members of his leadership team.

Parklife DC presents the full statement from RAMW below.

In light of the serious allegations surrounding sexual harassment and workplace culture recently filed against restaurateur Mike Isabella and several members of his leadership team, the Restaurant Association Metropolitan Washington (RAMW) Board of Directors requested that The RAMMYS judges panel convene to reconsider the restaurant group’s 2018 RAMMYS nominations.

Statement from the RAMMYS Judges Panel:

The panel, with support from the RAMW Board of Directors, has decided that the following reevaluations are necessary in order to maintain the high standards that are associated with the nominations:

The panel will keep the Rising Star of the Year nomination in place for Michael Rafidi, former Executive Chef of Arroz and Requin. The judges decided that this category, based on individual talent and performance, is focused on the individual and can be evaluated separately from the restaurant(s) and or company of employment. Rafidi was not named in the lawsuit which brought these allegations to light.

The RAMMY Awards process includes set criteria for both eligibility and for judging. As this judge’s panel and The Awards move forward, criteria will be revisited to evaluate and redefine good standing as a leader and or member of the community. It is the main objective of The RAMMYS to celebrate excellence in the restaurant and foodservice industry based on both culinary talent, vision, and leadership in the Washington Metropolitan region.

The RAMMYS judges are an anonymous panel of volunteer judges, consisting of food and dining journalists, educators and foodservice industry professionals.

**
Parklife DC has updated its list of RAMMY Award finalists for 2018 in response.