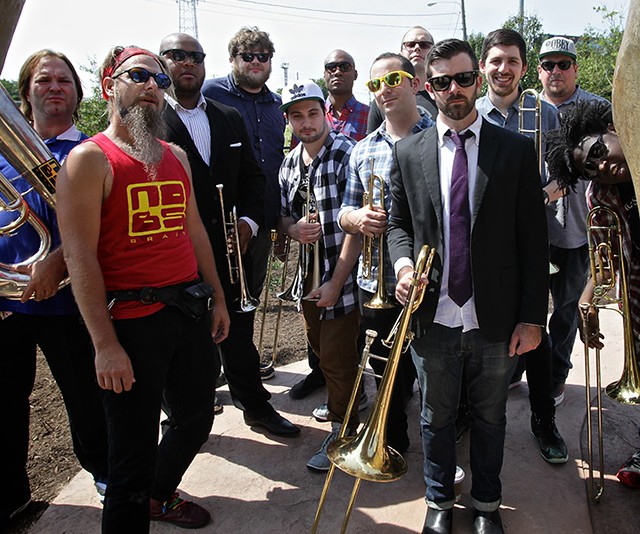 Reggie Pace and Lance Koehler founded the NO BS! Brass Band in 2006 in Richmond, Virginia. The 11-piece band have since released six albums of New Orleans-inspired music, most recently Brass Knuckles in 2015, and the band continues to tour and perform with a show tonight, April 27, at Gypsy Sally’s.

Reggie and Lance wanted to start a traditional brass band but also step out into the future, so they recruited a group of skilled musicians to make “epic party music,” thus NO BS! Brass Band was born.

The influences of NO BS! Brass Band include the likes of Jimmy Page meets John Coltrane in a mix of trombones, trumpets, saxophone, and tuba. Watch No BS! Brass Band perform a Tiny Desk Concert for NPR Music, playing their songs “RVA All Day,” “Run Around,” and “Infamous,” in 2013 on YouTube:

“The brass-band sound is a proud tradition of New Orleans. But over the years, those horns have evolved to embrace a broader repertoire, full of funk and jazz and even a little hip-hop — and the sounds have migrated well beyond Louisiana,” said NPR Music of the band.