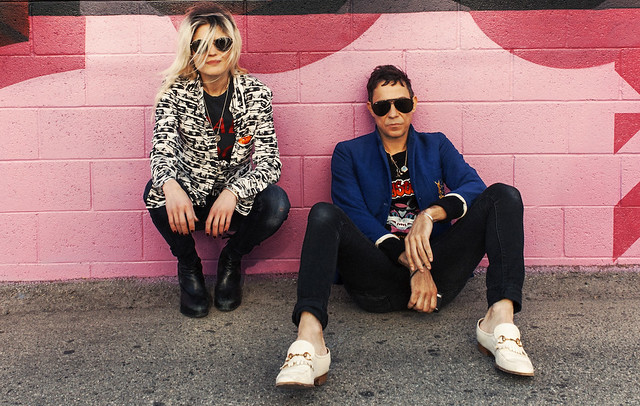 The Kills (Photo by Clayton Cubitt)

The Kills have been preparing their first new music since their fifth album, Ash & Ice, released in 2016 via Domino. The duo returns to DC to perform at the Lincoln Theater on Monday, May 14.

For their return, The Kills covered “List of Demands (Reparations)” by hip hop poet Saul Williams, imbuing the song with their own blend of garage blues.

“It’s a song of strength and empowerment, rooted in the idea of rising above,” vocalist Alison Mosshart said. “It was one of those songs you’re almost scared to cover, because it carries so much respect. It wasn’t a straight up love song or a drug song. It was defined, serious, and perfect already. With certain songs, you feel like an intruder trying to sing them, but this one felt like my own.”

Alison and guitarist Jamie Hince slowed down the song, which originally appeared on Saul’s 2014 self-titled album. In the past, Alison and Jamie regularly listened to the song backstage, deriving self-motivational fuel from the number.

“‘List of Demands’ was so impactful to us — it was the kind of song that would come on backstage and everyone would stop what they were doing and stand up,” Jamie said. “The more I found myself listening to the lyrics, the more I heard in them, and found myself singing along with goose bumps. The brilliant thing about it is that it speaks to so many different ideas — a true underground thing like the best Iggy Pop songs.”

Saul praised The Kills’ cover of his song: “I always felt envious of the way the ‘60s generation shared songs and ideologies. Jimi singing Dylan. Rotary Connection singing Otis Redding. The Stones singing the blues,” Williams said. “This is all part of the beauty and power of music and it reverberates deeply in me. All this to say, I’m honored. I liked The Kills before they chose to cover ‘LOD.’ If they can feel themselves in that song, it’s because they are as much a part of it as I am.”

The Kills will play “List of Demands (Reparations)” and other favorites one week from today! Buy your tickets online.