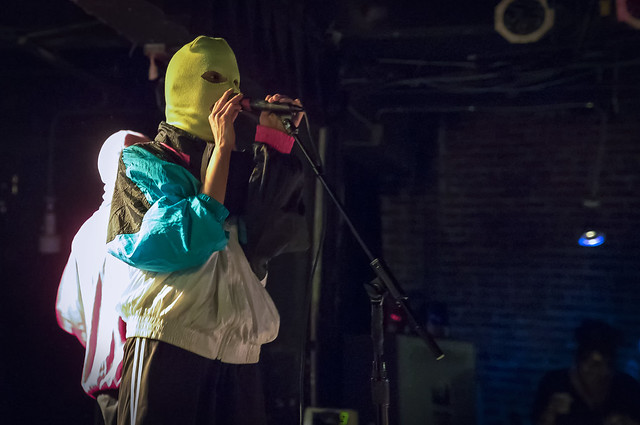 The beginning of the show was like a scene from a dystopian film. The part of the movie where a live feed of a masked insurgent streams across video screens exposing the crimes of a corrupt regime to unsuspecting onlookers. This time the message comes from a woman wearing a fluorescent green ski mask.

It’s safe to presume that the masked woman is none other than Nadya Tolokonnikova of Pussy Riot. Her electronically disguised voice reads 25 political statements as they are projected on a screen at the back of the Black Cat stage on Wednesday. The clips recount social injustice and inequality. Things like, “82 percent of all wealth generated in the past year went to the top 1 percent.” The assertions generate visceral reactions from the crowd. The revolution has begun!

The group’s membership has fluctuated since forming in 2011. On this particular night the band consists of a masked Nadya Tolokonnikova on vocals, a tall masked male DJ, and two masked female background dancers. Stage lights are kept to a minimum during their performance. Strobe lights flash occasionally to illuminate the artists on stage. It’s unclear if this is a precautionary measure. Putin has shown that his ability to punish dissidents extends well beyond Russian borders.

The band is all too familiar with what happens when you poke the Russian bear. Group members have been arrested and detained multiple times in Russia for their political protests. One such act was their 2012 “punk prayer.” The guerrilla performance at the altar of Moscow’s largest cathedral was a provocative attack on corruption and the ties between church and state. The protest landed Maria Alyokhina and Nadya Tolokonnikova 21-month jail terms.

During the show, Pussy Riot described their music as a way to ignite social change through art and not violence. They use a heavy dose of satire to grab your attention. Mid-way through the show an important news bulletin plays over the speakers: Donald Trump has been impeached. The crowd cheered the “fake news.” Pussy Riot draws parallels between Trump and Russian-style authoritarianism on “Police State” and “Make America Great Again.”

The band has veered from their punk roots to rap and electronic music. There’s an EDM feel to the recently released “Bad Apples” and “Straight Outta Vagina.” The group performs both songs with the verve of an act at the Ultra Music Festival.

The DJ, gone for a  moment, reappears during the second half of the show. He has a large flag in Russian colors with “Pussy is the new dick” written at the center. He waves the banner in support of transgender rights as the band closes out their performance. The group will return for a brief encore, but the cheers for Pussy Riot will continue well after the show ends.

Here are some photos of Pussy Riot performing at Black Cat on May 23, 2018. All photos copyright and courtesy of Will Colbert. 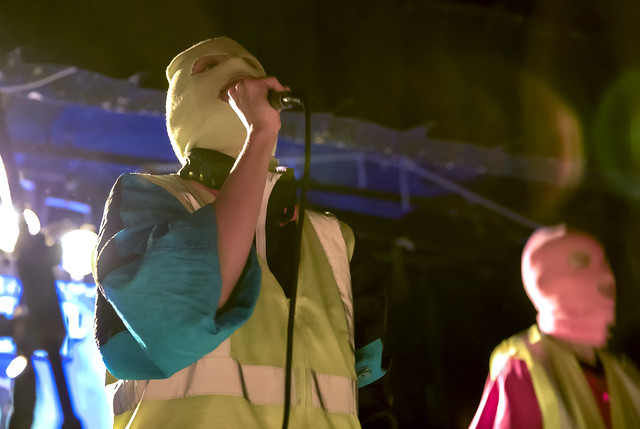 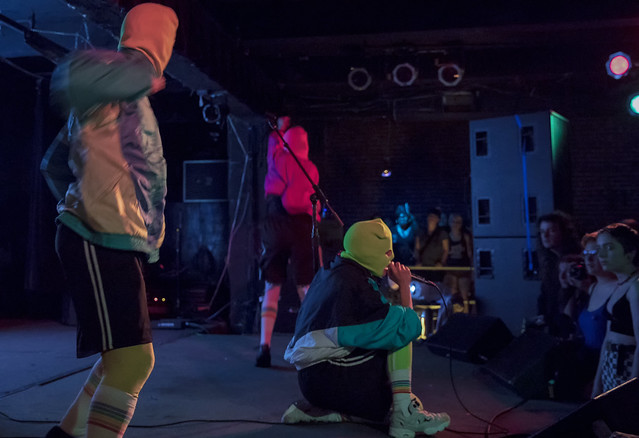 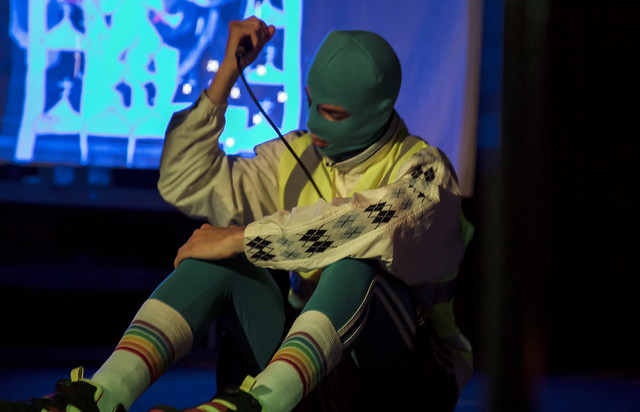 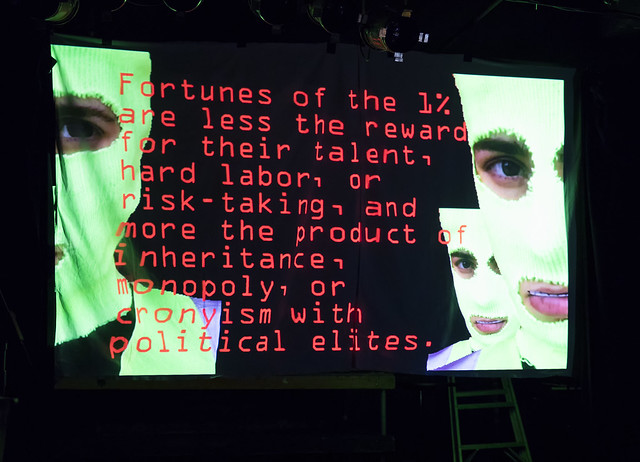 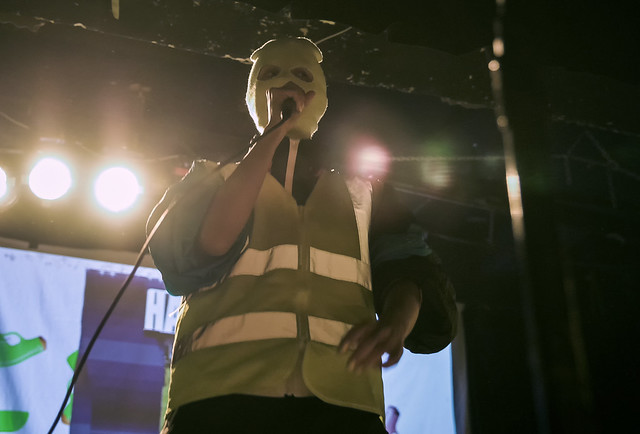 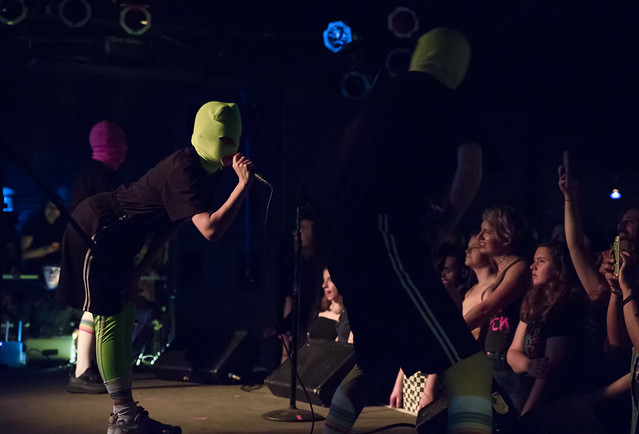 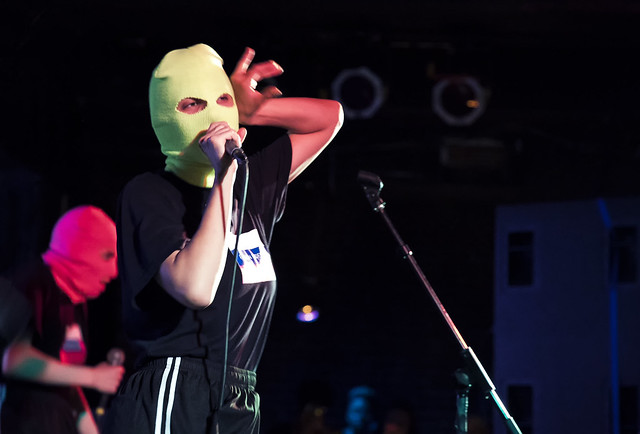 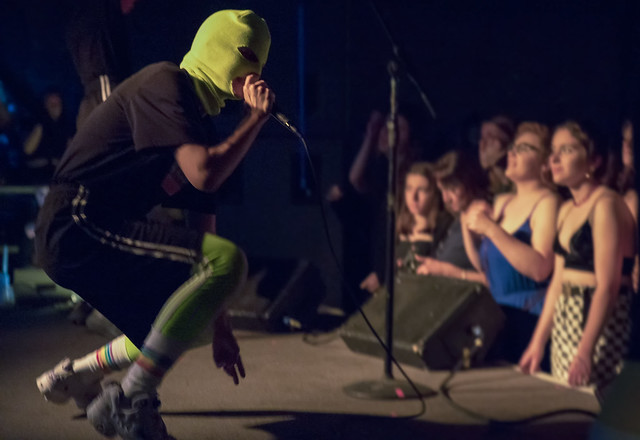