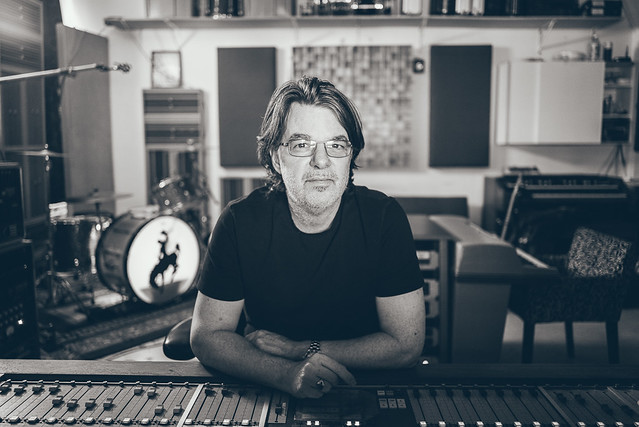 Do me a favor, please, before we go any further. Play Joan Jett and The Blackheart’s “I Love Rock ‘n Roll.” That legendary guitar riff you hear? That’s played by Eric “Roscoe” Ambel.

Age 60, Roscoe has had a long and colorful career with work ranging from punk to country — and that history was on full display during a satisfying show at Hill Country Live on Thursday.

Roscoe started playing in bands and releasing music while he was at the University of Wyoming in the late ’70s. He came wider recognition as the guitarist for the Joan Jett in the early ’80s, but he was let go during the recording of the album I Love Rock ’n Roll. In 1984, he joined the New York roots rock quartet the Del-Lords, who, though critically acclaimed, failed to breakthrough to mainstream consciousness. In 1996, Roscoe became — and has remained — a member of the part Americana outfit the Yayhoos. From 2000-05, he was the guitarist in alt-country icon Steve Earle’s band, The Dukes.

In addition to his work and his solo career, Roscoe is widely sought after as a sideman and producer. He’s played with artist as diverse as Nils Lofgren, Run-DMC, and Emmylou Harris. In addition the guitar, Roscoe occasionally plays the trumpet and trombone, instruments he played in a high school band. He’s produced several notable Americana acts, including The Bottle Rockets and Kasey Anderson, and mixed, engineered, and arranged instrumentation on others.

Listen to Roscoe Live: Vol. 1 (Live at Livestock 2016) by Eric Ambel on Bandcamp:

On Thursday, Roscoe and his band opened for Drivin’ N Cryin’ at DC’s Hill Country BBQ. The floor was cleared for the audience to stand, although some sat on the tables pushed against the wall. I made it to the show in time to meet up with a couple of friends and briefly greet Roscoe as he was taking the stage.

Roscoe’s set was as varied his career, highlighted by a phenomenal three-song sequence at the end. Roscoe and his band played the Rolling Stones “Honky Tonk Woman” — honky tonk style; all the notes were the same, it was just to a different rhythm. Next he played a cover of Gillian Welch’s “Miss Ohio,” turning it into the kind of rock anthem that had me wanting to reach for a lighter. He finished his set with the Sex Pistols’ “Did You No Wrong,” going back to his punk roots.

As a producer, Roscoe has two projects coming this fall — one with The Bottle Rockets, who I covered for for this site in March, and one with Sarah Borges. He’s working on recording projects with Jimbo Mathus of the Squirrel Nut Zippers, who wrote one of the songs he played Thursday, “Let’s Play With Fire.” (Note: ParkLife DC urges all readers to exercise proper fire safety at all times.) Roscoe is also in a partnership on a two-year-old new label called solo sounds that produces instrumental music.

I did want to ask Roscoe one thing — why Roscoe? I’d never met a Roscoe before. The closest I’d come to a Roscoe was the eponymous Energy Emporium in the late ’80s computer game Bard’s Tale II. The nickname Roscoe, he told me, comes from living at the intersection of Roscoe and Rosita in Northridge, California, though he didn’t actually get it until much later — a long story.