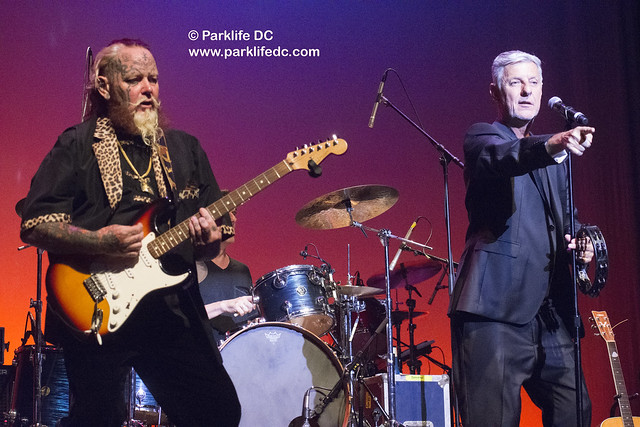 The Retro Futura Tour regularly brings together popular artists from the ‘80s for a circuit through the United States, although it has skipped the DC area in recent years. Nevertheless, the tour got off to a great start last week and then visited Englewood, New Jersey, for a performance at the Bergen Performing Arts Center on Saturday with a terrific roster of talented folks — Limahl, Tony Lewis of The Outfield, Modern English, Belinda Carlisle, and ABC starring Martin Fry.

Parklife DC was there for the concert, and below we share our reflections on Limahl, Tony Lewis, and Modern English. Check back tomorrow for our review of Belinda Carlisle and ABC.

Retro Futura opened brilliantly with an engaging show by Limahl, once the frontman for UK New Romantics Kajagoogoo. Limahl was personable, funny, and sincere — and he sounded great! On his first-ever tour of North America (how is that possible?), Limahl sounded a bit more mature undoubtedly than he did when he seized the charts in 1983 with his vocals on “Too Shy.” And he performed that famous UK #1 song alongside three others — including “Interview Rooms” and a medley of “Ooh to Be Ah/Hang on Now” in a set that was far too short!

Limahl told the story of how he was brash enough as a young waiter to approach Nick Rhodes of Duran Duran, who got Kajagoogoo a record deal with a demo tape that Limahl handed to him. While that may have been a gift to the band, Limahl’s renditions of those songs were a gift to us, and surely a “bucket list” item to hear live if you’re a fan of ‘80s new wave music at all.

Perhaps the highlight of Limahl’s performance, however, was “NeverEnding Story,” the song written by Giorgio Moroder for the fantasy movie of the same name. Always ready with a quip, Limahl humorously gave away an autographed poster of himself circa 1984, the year of “NeverEnding Story,” after observing using hairspray as a young man was more important than protecting the ozone layer.

Here are some pictures of Limaal looking sharp during Retro Futura on July 14 at the Bergen Performing Arts Center. 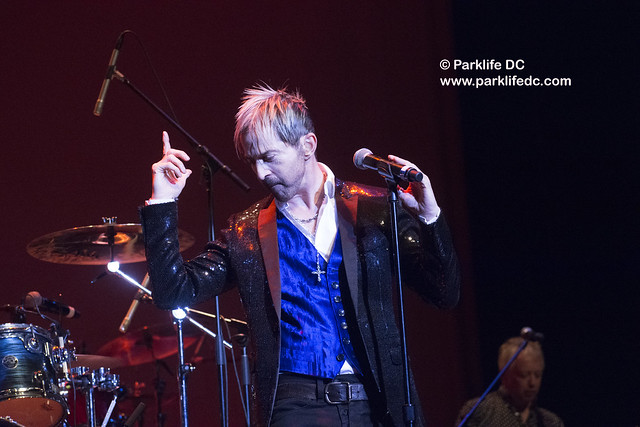 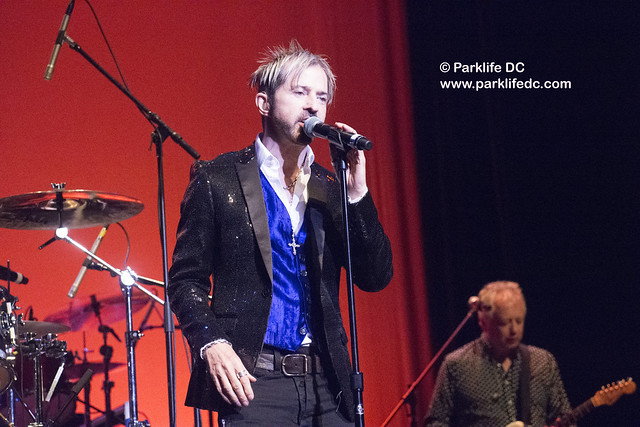 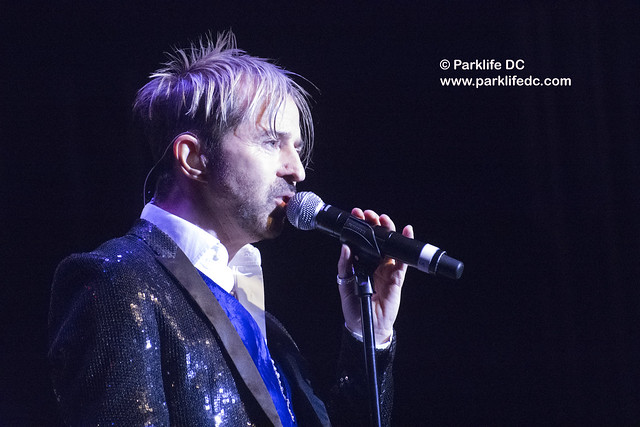 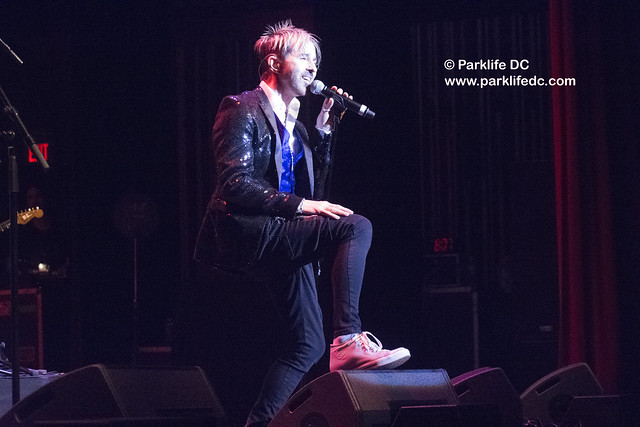 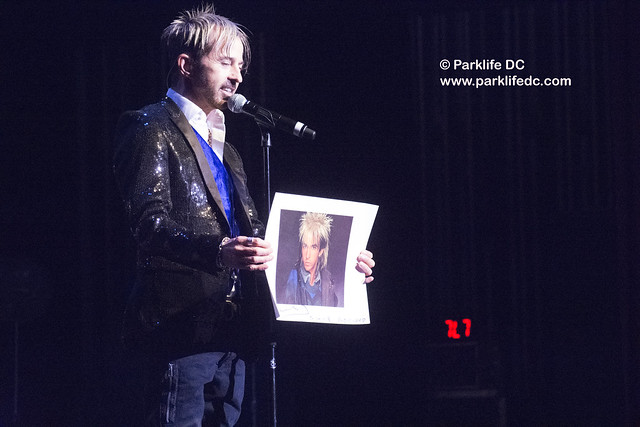 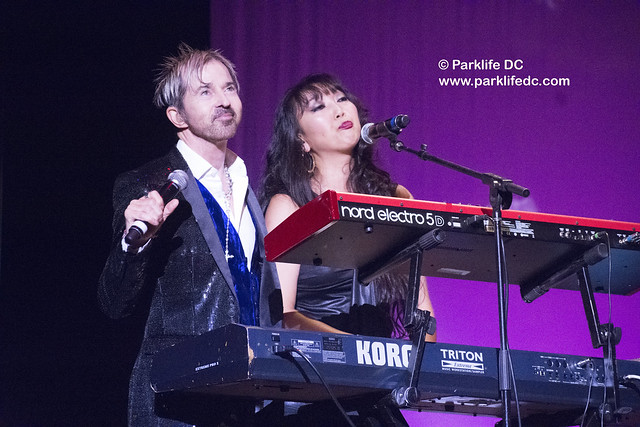 Immediately following Limahl, Tony Lewis of The Outfield took the stage. We all remember The Outfield well for their ubiquitous song, “Your Love,” which begins with those famous words “Josie’s on a vacation far away/Come around and talk it over/So many things I want to say/You know I like my girls a little bit older.”

Well, a little bit older Tony and that song may be, but the crowd went absolutely wild for it, which Tony sang to close his set, hailing from the debut album by The Outfield in 1985. For enthusiasts at Retro Futura, “Your Love” proved more infectious than *anything* by Journey.

The Outfield disbanded in 2014 with the death of Tony’s bandmate John Spinks, but the English rocker is back in the game with his first solo album, Out of the Darkness, released on June 29 via Madison Records. Tony performed “Into the Light” from the new album alongside favorites by The Outfield, and the song was very well received indeed.

Check out a few photos of Tony Lewis rocking out at Retro Futura on July 14 at the Bergen Performing Arts Center. 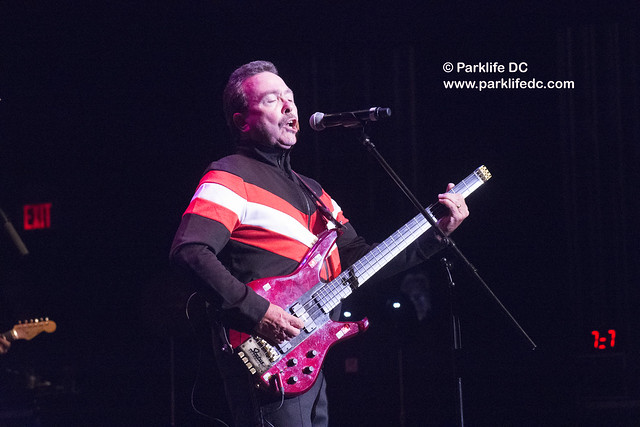 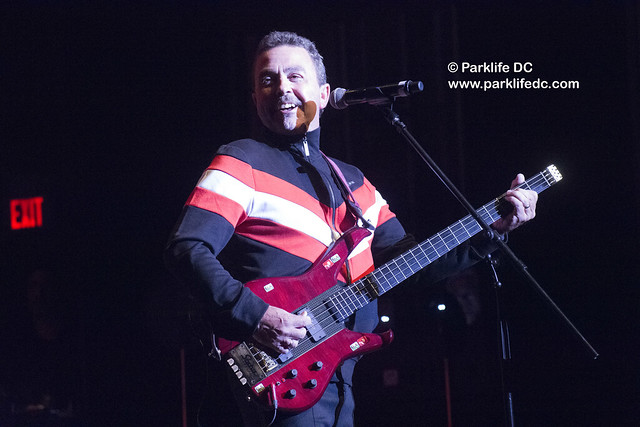 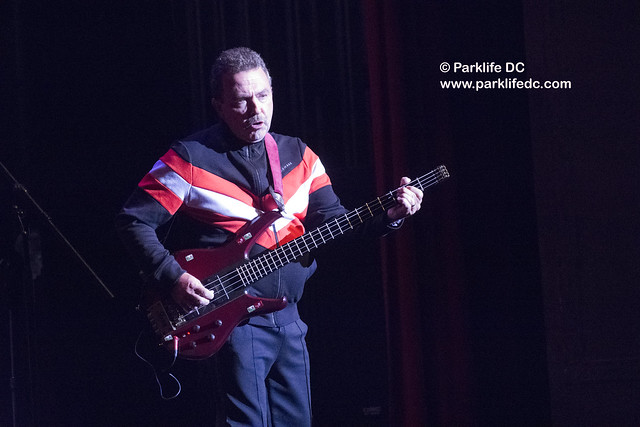 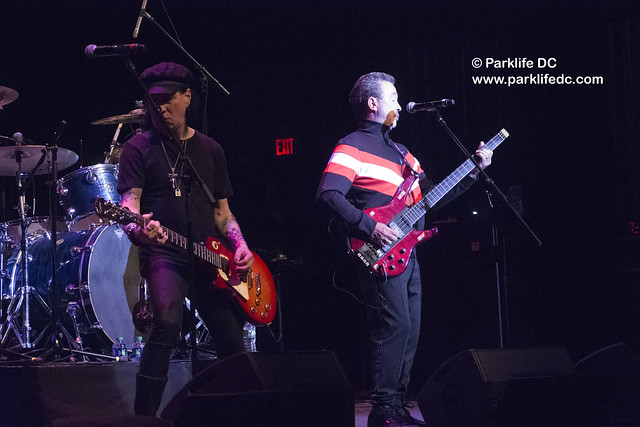 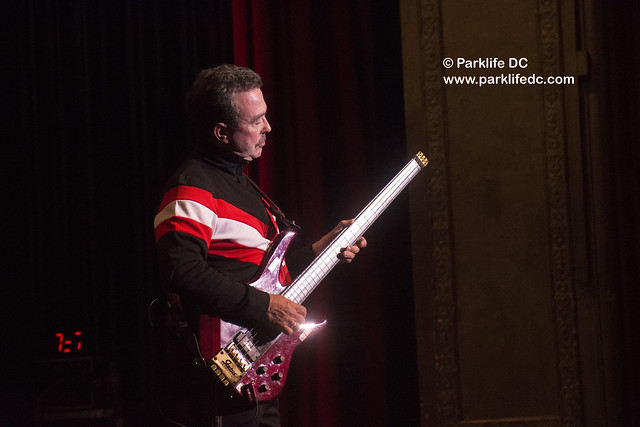 If for some reason you were living under a rock in the ‘80s (or simply not yet born) and the songs “Too Shy” and “Your Love” got by you somehow, you certainly have not escaped the irresistible “I Melt With You” by Modern English, the distinguished statesmen of post-punk. A true shift occurred when the five members of the Modern English band stepped onto stage, and vocalist Robbie Grey led them through a set of only five songs, capped by “I Melt With You,” which first appeared in 1982 on the band’s second album, After the Snow.

It was the oldest single played by Modern English on Saturday although After the Snow’s “Someone’s Calling” was a close second. The most recent song was “Moonbeam,” one of the honestly great songs from Take Me to the Trees, a new album from Modern English released in 2016. It’s a song that truly showcases the ear of keyboardist Stephen Walker, who adds new wave sparkle to a lovely tune.

Joining Robbie and Stephen in the band of course were other original members bassist Mick Conroy and guitarist Gary McDowell along with the splendid drummer Roy Martin rounding out the team. Modern English were last in DC to perform at the Rock and Roll Hotel in November, and hopefully we will see them again soon.

Here are some pictures of Modern English melting the audience at the Bergen Performing Arts Center on July 14. 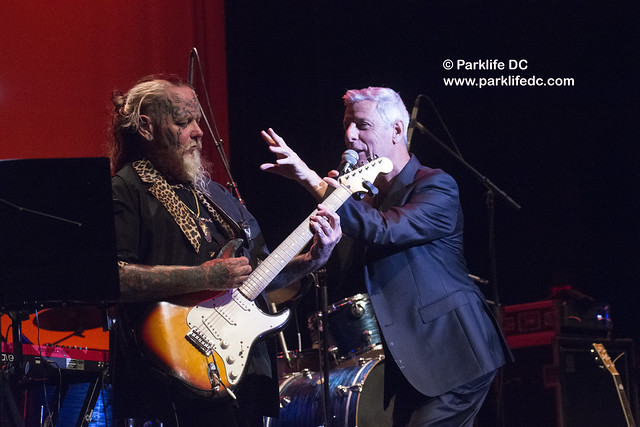 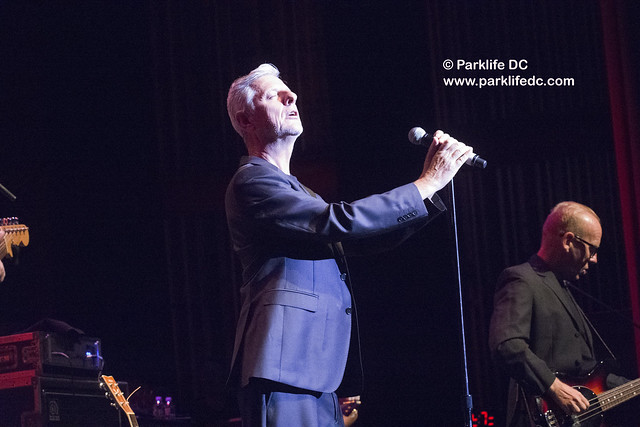 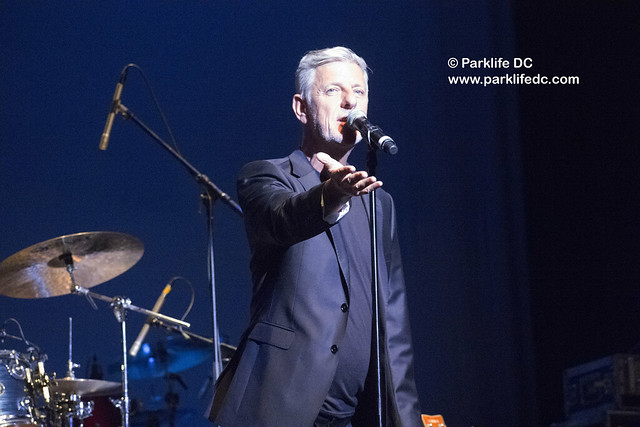 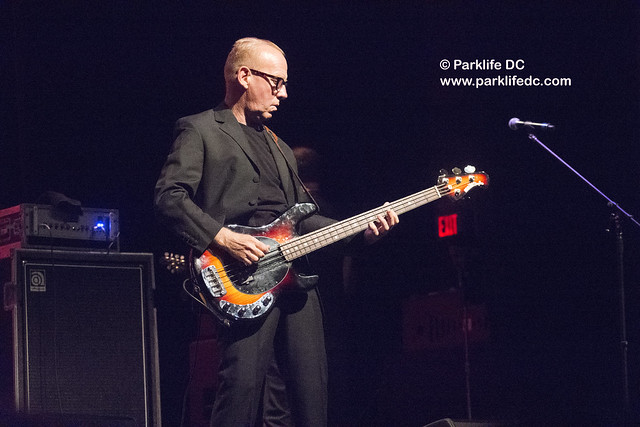 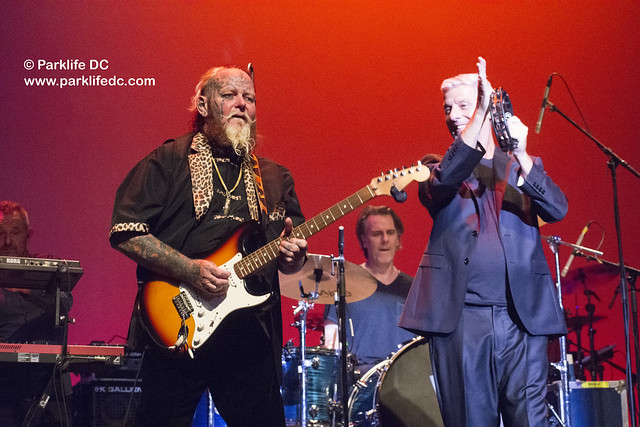 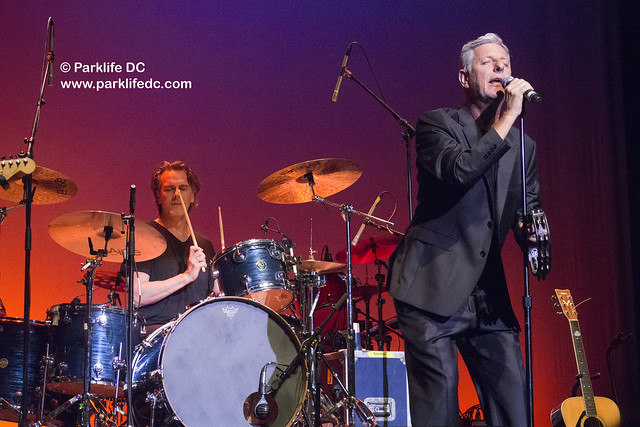 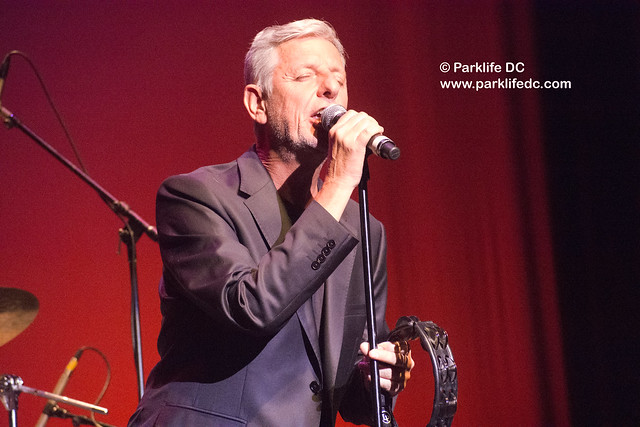 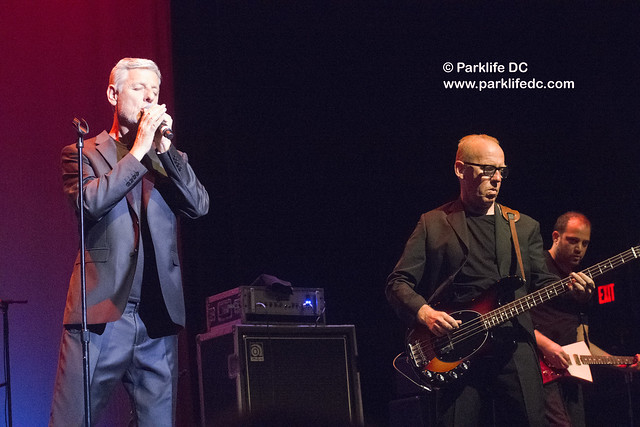 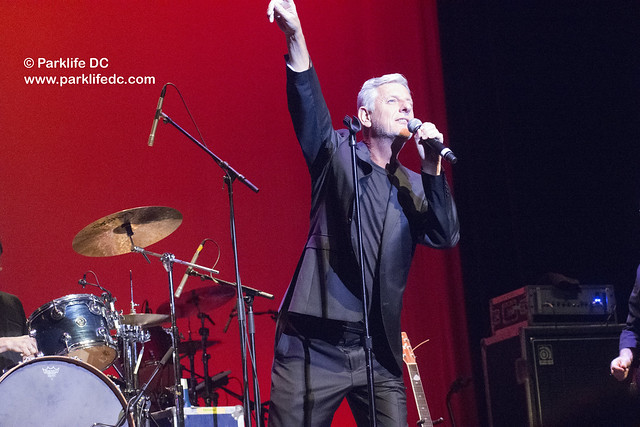