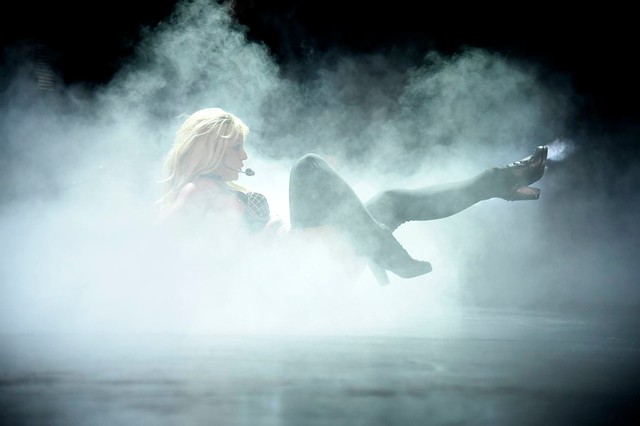 In the second half of her show at MGM National Harbor on Friday, Britney Spears grinds to a halt for a mock conversation with one of her dancers.

“Stop the show?” Britney asked. “We need to find a hot guy to dance with us?”

As it turned out, Team Britney already had a game volunteer named “Scott” lined up aside the stage, and he would soon provide some comic relief as a fetish object during a flashy performance of “Freakshow” from Britney’s 2007 album, Blackout.

Throughout the show, Britney was consistently dressed in racy and lacy fashions, strutting her stuff for her Piece of Me Tour, which she spent four yours performing as a residency in Las Vegas. As such, the show was very polished indeed, and it featured highly choreographed stagecraft that moved like clockwork about the expansive stage in The Theater at MGM National Harbor. And the show was more about dancing than it was singing, which is not such a bad thing considering that Britney was in great form and seemed very enthusiastic to be performing to a sold-out crowd for the second of two nights.

The only time Britney spoke for the entire show was that moment in recruiting Scott to wear a leather harness and be whipped while dancers swarmed around him to place him into triumphant poses during “Freakshow.” Otherwise, as other outlets have reported, the record-setting fashionista, who was the youngest artist to see five of her albums hit #1 on the music charts, lip synched to her greatest hits.

Britney divided the show into seven acts and an encore. Each act featured a video interlude that served as a transition between a costume change and a set change. Along the way, Britney swung her hips and arms through a march of her R&B-inflected catalog.

Act I spotlighted a medley of “Piece of Me” from Blackout, which lent its name to the tour, along with “Break the Ice” from follow-up album, Circus. Act II delivered megahits “…Baby, One More Time” and “Oops!… I Did It Again” from her famous first and second albums of the same name respectively. And a highlight of Act III was “Me Against the Music” from her 2003 album, In the Zone. During Act III on the previous night, Britney made the live debut of songs “Clumsy” and “Change Your Mind (No Seas Cortes)” from her latest album, 2016’s Glory.

Throughout it all, Britney gave an energetic performance that nearly never slowed down, but she appeared fresh and tireless throughout the electric and eclectic 90-minute romp. Act IV flashed back to 2001’s Britney with “Boys,” and Act V elicited squeals from the audience as Britney and her troupe paraded to “I’m a Slave 4 U” from the same album.

Speaking of the audience, the female-heavy crowd arrived deck out in their sharpest club gear for the concert, making it the swankiest crowd I’ve witnessed over the 18+ months of catching shows at MGM National Harbor. Women were there to embrace Britney in all of her glory, and they sang along to every song, some silently and some loudly. They knew the words to “If U Seek Amy” in Act VI, as well as “Circus,” from the 2009 album Circus. And of course, the audience was a chorus of tremendous support for “Toxic” from In the Zone in the closing Act VII.

Britney whirled through an encore of “Till the World Ends” before dramatically closing the show to thunderous applause. This was a happy, satisfied audience. And Ms. Spears continues her tour tonight, July 17, in Bethlehem, Pennsylvania. She’s in Atlantic City and New York City in the coming days, and she wraps her current US run on June 29 in Hollywood, Florida.

Here are a few more pictures of Britney Spears at MGM National Harbor on July 12, 2018. All photos by Kevin Mazur/Getty Images. 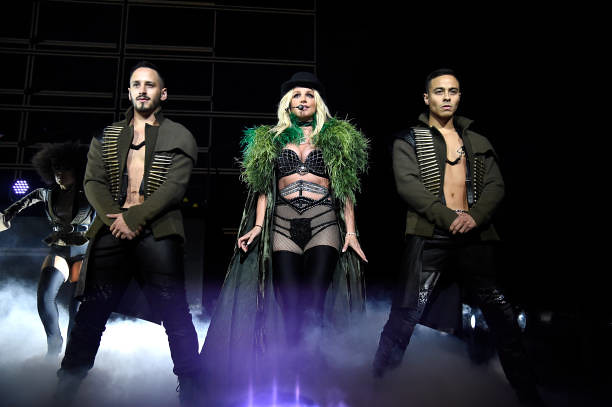 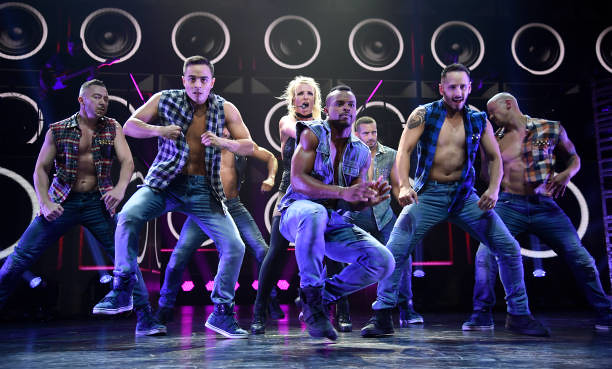 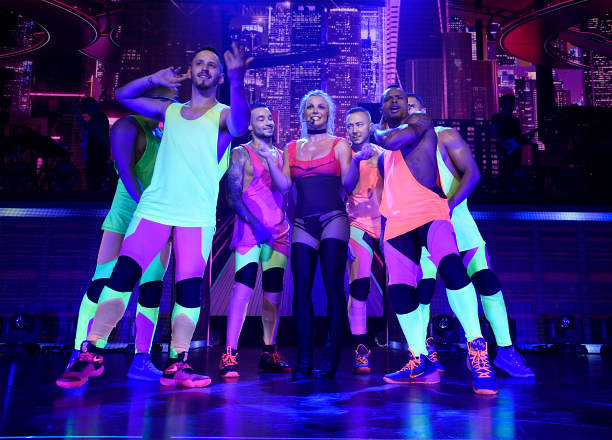 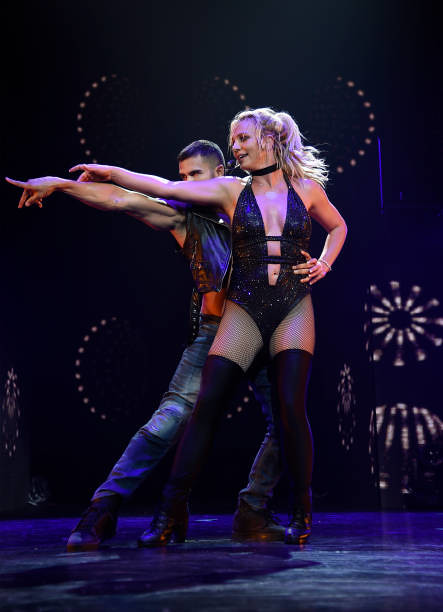 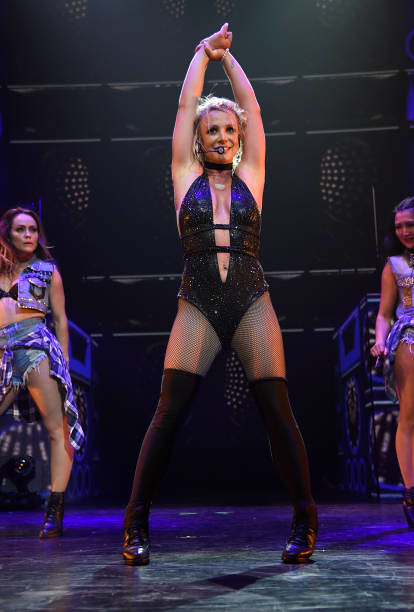 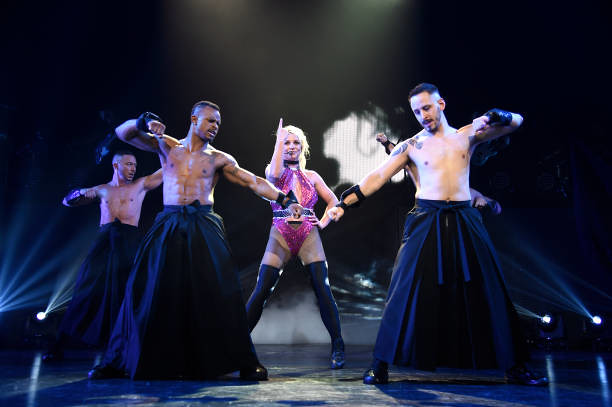 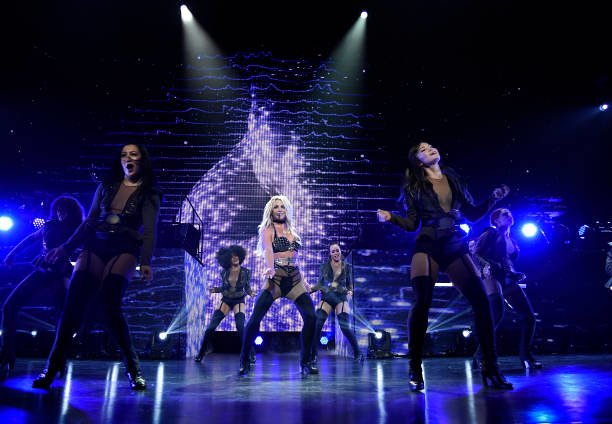 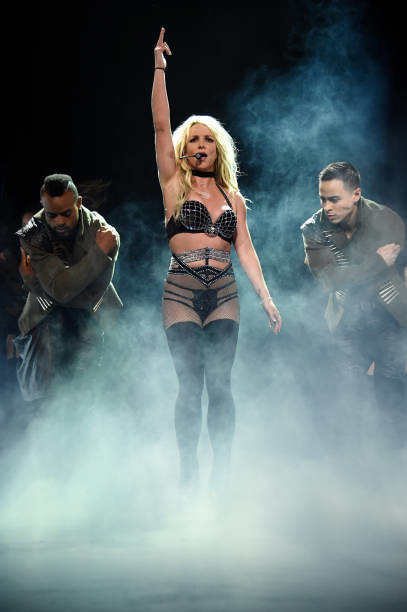