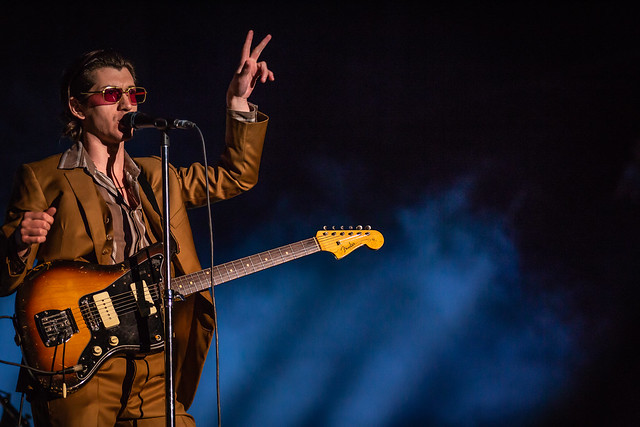 Alex Turner fronts the Arctic Monkeys (with more hair) at Firefly Music Festival on June 15, 2018. (Photo by Live at Firefly)

The Arctic Monkeys, as I’m told, now live in Los Angeles and not Sheffield, England, any longer. With that move comes an apparent transformation or maturation that began with an urbane sonic makeover in 2013’s AM.

The band are no longer four kids banging out spikey songs about being a lad in Britain. They’ve moved onto smooth, psychedelic jams about being a man in a world changing around them, and they took their new album, Tranquility Base Hotel & Casino, to The Anthem for two nights last weekend to flourish under their newfound perspectives.

With freshly shorn hair, frontman Alex Turner strode onto stage at The Anthem on Sunday, the second of two nights, to open the show with “Four Out of Five,” a seductive adman’s appeal to “take it easy for a little while” as the song observes the gentrification around them.

In a welcome croon, Alex twisted and shrugged behind his microphone, looking and sounding pretty groovy. Before the song is over, he sat at his keyboard to dazzle with the instrument, a major presence in songs from the new album. The Arctic Monkeys have come a very long way since the first time I saw them in Philadelphia in 2006. Fresh off their first album, the gents raucously slammed through a set of less than 30 minutes and then walked off the stage without saying a word.

Today, the Arctic Monkeys still aren’t much for chat during a show. They get down to business and move from song to song. But they have a newfound sophistication that really truly becomes them. It feels natural and organic, and quite far from a mid-career shift that occasionally occurs when an artist lurches badly into another direction.

That luster continued to shine with the new songs later in the set with the title track of their sixth album, “Tranquility Base Hotel & Casino.” Matt Helders began the song with an old-school garage rock tumble of his drums, while the steady hands of guitarist Jamie Cook transitioned from a glam edge into a smooth slide. Seated at his keyboard, Alex sings of the getaway spot in the song’s title, again an appealing destination, as the world outside spins away in a separate sphere.

Listen to Tranquility Base Hotel & Casino by the Arctic Monkeys on Spotify:

The Arctic Monkeys meanwhile don’t forget where they came from, and so of course they hit several songs from that memorable 2006 debut album, Whatever People Say I Am, That’s What I’m Not. Early in the set, Alex and company performed “The View from the Afternoon,” which saw Alex grab his guitar and get as rough and tumble as his younger self would. And Arctic Monkeys closed the main set with “I Bet You Look Good on the Dancefloor,” which sounded just as clever as it did in 2006. What’s happened since is that the guys have continued to grow and make music just as clever — a rare feat indeed among the Monkeys’ musical peers.

The band closed the show with the killer “R U Mine?” from AM, evidence of how growth and good songwriting can keep a young band fresh. It’s a mature love song that pointed to where the band were going to go five years ago, and it’s a trail they will hopefully continue to follow for some time to come.

Tonight, Aug. 2, follow the Arctic Monkeys to Lollapalooza in Chicago before they leave the country for Canada and Europe. The band returns for more US shows in October. Catch them if you can for a thoroughly entertaining and thoughtful evening!