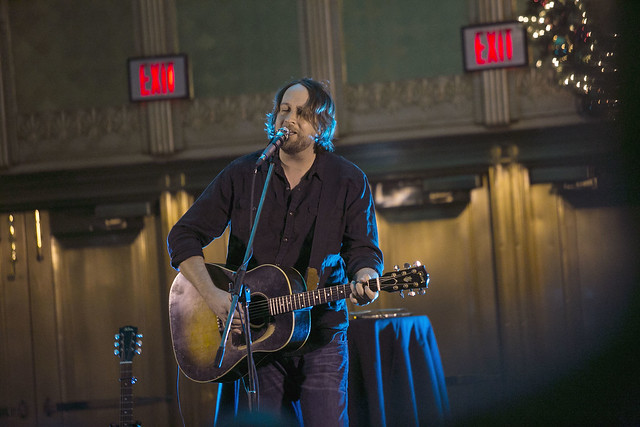 Americana singer-songwriter Hayes Carll was in rare form before a sold-out house at DC’s City Winery Saturday evening. Performing mostly solo, with just an acoustic guitar, Hayes had the crowd spellbound, playing favorite songs and freely breaking into story. Hayes’s trademark wry, sarcastic sense of humor was on fine display, as was his heartfelt sincerity.

Next month, Hayes is going into the audience to record a new album, he told the audience, and he wanted to play a new song. And the audience responded enthusiastically. The song, “Noneya,” he said, was co-written by his girlfriend, musician Allison Moorer, in the sense that “she walks around saying crazy shit and I write it down.” As Hayes sang, he got to the line, “Sometimes we pretend to be strangers,” and he stopped playing. He felt a need to explain.

Hayes travels a lot on Southwest Airlines, and he is a member of their privileges club, and Allison is not. This allows him to board first, sometimes as much as 20 minutes before Allison. When she boards, she asks, “Is this seat taken?” Sometimes, they pretend to be strangers, and Hayes “tries to pick her up” in whatever persona he chooses to play. However, he has never succeeded in flirting with her in these scenarios, and he expressed his luck that he got her when he did.

When Hayes played “Beaumont,” he confessed he might’ve romanticized the southeast Texas town too much. Audience members in Europe, he said, were telling him about planning vacations there.

Hayes’s song “Bible on the Dash,” co-written with Canadian Corb Lund, is an exploration of their wacky idea that putting a bible on the dashboard could get them out of traffic tickets. Corb is a big star in Canada, and Hayes tours with him. Once, everyone on the tour was invited over to the Prime Minister’s residence by his wife, and Hayes had forgotten his passport. He showed the guards his first CD, which he said “is a poor representation of me, because I can’t even grow a beard on it. The guards just said come on in.” Hayes didn’t think that would work here in the States, but it seemed to work in Canada.

Lovers and Leavers, Hayes’ most recent album, came out in 2016. He broke through with his second album, 2004’s Little Rock, the first self-released album to reach #1 on the Americana charts. His next release, Trouble in Mind (2008/Lost Highway), was ranked the #60 album of the year by the Village Voice. The album included “She Left Me For Jesus,” voted the Americana Music Association Song of the Year, which Hayes played on Saturday. The song tells of a breakup precipitated by the protagonist’s girlfriend turning to religion, and the narrator’s resulting anger.

Watch the official music video for “The Magic Kid” by Hayes Carll on YouTube:

Hayes had his greatest success with his 2011 album KMAG YOYO & Other American Stories. KMAG YOYO, as Hayes explained, stands for, “Kiss my ass guys, you’re on your own,” and it is military slang. The song itself is one of Hayes’s more cheerful numbers, involving a soldier who gets hit with an IED then has a bad LSD trip that involves outer space. As Hayes joked, he’s really going for that mainstream audience. All joking aside, the album actually did reach #12 on the country charts. In 2016, he received a Grammy Nomination for Best Country Song for “Chances Are,” as performed by Lee Ann Womack.

While Hayes played solo for most of his performance, he brought out his opening act, Travis Linville, to accompany him for a significant portion of the show. Travis played rhythm for Hayes, first on acoustic guitar then on a Dobro. (A Dobro is a type of resonator guitar used widely in bluegrass. In a resonator guitar, the motion of the causes resonator cones to spin, producing sound, as open to the action of a sounding board, in an acoustic guitar, and this gives it a different tone. Other types of resonators are used acoustic blues.)

For good music and great storytelling, this show couldn’t be beat. It’s difficult to convey humor in a report, but my face hurt at times from laughing at Hayes’s stories. I have no doubt that Hayes’s performance at the Mother Church of Country Music, the Ryman, on Sunday was every bit the event that his appearance at City Winery was. He’s touring through September, mostly in Texas, so experience the show for yourself when you can.