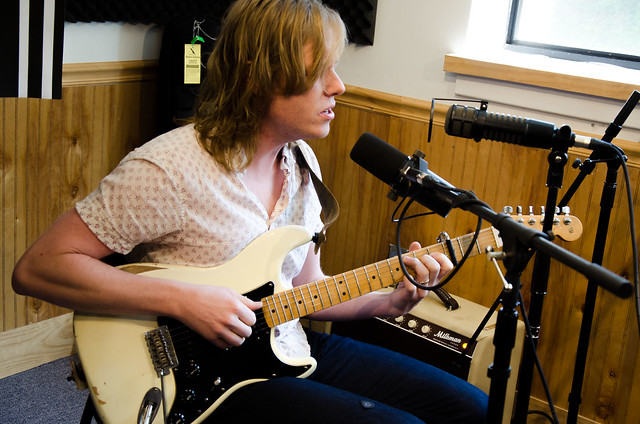 Fortunately, James rehabbed his injuries, and he was with his brothers Friday at the Wharf’s Union Stage. Friday night’s concert was one of three homecoming shows this week in Richmond, DC, and the band’s base in Charlottesville. The three actual Sons of Bill — brothers Abe, James, and Sam Wilson — are the sons of a professor of philosophical theology and Southern literature at the University of Virginia. (The other members of the band are bassist Joe Dickey and drummer Todd Wellons. Founding bassist Seth Green left after the recording of the band’s latest album to spend more time with his family.) After these shows, the band heads to Europe, where it will play more dates internationally than domestically.

The band’s set included both new material and old favorites, like “Brand New Paradigm,” from Love and Logic. “Believer/Pretender” displayed the current album’s turn toward a more synth-heavy, indie pop style from the roots rock/Americana style present in the band’s earlier records. Lee Zimmerman writes at Paste Magazine that the band’s new style, “brings to mind certain ‘80s icons — Echo and the Bunnymen, Ultravox, Spandau Ballet and the like, groups that aspired to reach a certain high plateau with sonics and synthesizers but emitted emotion as well.”

Listen to Sons of Bill perform for Audiotree Live on Bandcamp to get a taste of their early sound:

The audience got a very full night of music with three acts, all originating in the Sons’ home base, Charlottesville. The opening act, Nashville-based singer-songwriter Carl Anderson, worked with the Sons of Bill on their new album, and he was backed on rhythm guitar by Sam Wilson. Sam also joined the second act of the evening, roots rock band the Wrinkle Neck Mules, on a few songs.

Throughout the evening, and especially during the opener, the audience was especially chatty. This may have led to the decision by the Sons of Bill not to say anything and play straight through their set. I felt somewhat embarrassed to be part of such an impolite audience!

Sons of Bill continue touring in Europe next week, and they are scheduled to perform at AmericanaFest in Nashville in September.