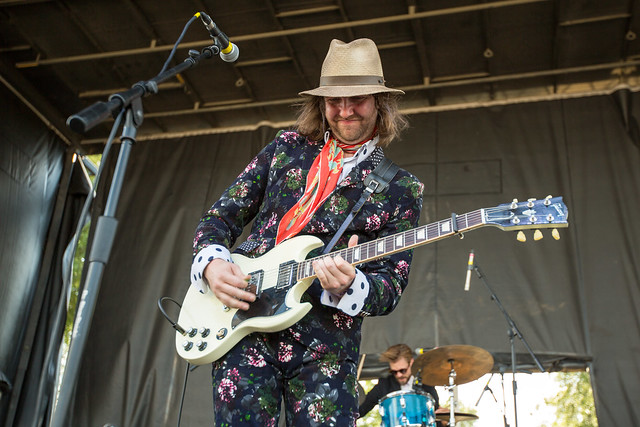 From the new album, he played “Heart Slows Down,” “The Truth Is So Hard to Believe,” and “Set You Free.” The album channels equal parts British and heartland rock.

Listen to Karma for Cheap by Aaron Lee Tasjan on Bandcamp:

Aaron and I are both from Ohio. Aaron was born in the Columbus suburbs, and I’m from the Akron suburbs, separated by perhaps a two-hour drive. Aaron and his band played “Ready to Die,” which calls out the Cuyahoga River, located just a county north of my childhood home. The band jammed out while playing this song, and Aaron’s monster guitar skills really showed here. As a teenager, Aaron was a guitar prodigy, winning the Outstanding Guitarist Award in the Essentially Ellington Competition at Jazz at Lincoln Center. Despite being offered a full scholarship to the Berklee College of Music, he opted to move to Brooklyn and start a career as a professional musician.

Now based in Nashville, the singer-songwriter related the story behind my favorite song of his, “Lucinda’s Room.” He checked into the Crystal Hotel in Portland, Oregon, where every room is dedicated to a musician, and he was given the Lucinda Williams Room. He said that it was incredibly inspiring, as an aspiring young songwriter, to wake up to a mural of one of the greatest songwriters. Riffing on the theme of the room, he lit up his apple bong, making it the “Blaze” (get it?) Foley and Lucinda Williams room.

Aaron makes no secret of his fondness for mind-altering substances. In addition to marijuana, he favors acid, and he uses it to enhance his creativity. During Tuesday’s concert, he spoke about an occasion on which, on a single hit of acid, he was able to write several songs. It’s inspiring stuff, and makes one consider whether these drugs really do more harm than good. (I’ve never tried it myself; I found myself already pondering the strangeness of word order in compounds when I’m sober, so God knows what would happen if I tripped.)

Often, as volume goes up, vocals become less clear, but this was, thankfully, not the case Tuesday night at Union Stage. Due to excellent work by the sound team, even as Aaron and company turned it up, the lead vocals and harmonies remained crystal clear. I made it a point to stop by the sound booth and compliment these crucial but often forgotten souls. If the sound quality at a show you attend is especially good, let these folks know. It’s rare that they hear from the audience, and they’ll appreciate it.

If you enjoy high-quality songwriting, and you like to rock hard, you can’t go wrong with Aaron. Check him out live, and make sure to check out his new album, Karma for Cheap, available this Friday.