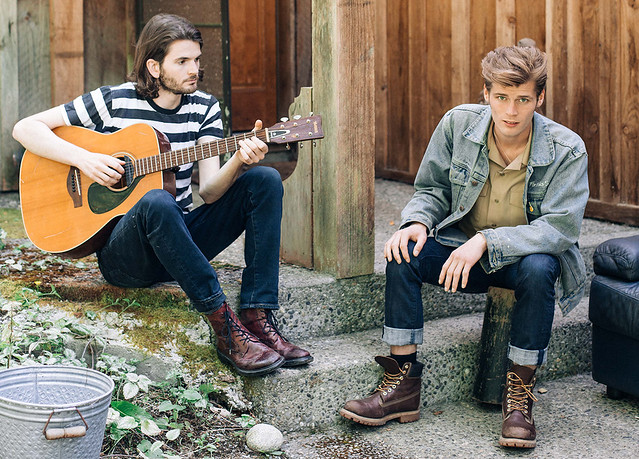 It has been a busy 12 months for Irish pop-Americana duo Hudson Taylor. Brothers Alfie and Harry Hudson Taylor have been true road warriors, living out of suitcases, while selling out shows in Ireland and across Europe. North America will be the next leg of their seemingly nonstop tour schedule. The band will open for Hozier on Oct. 2 at DC’s Lincoln Theater (its sold out) and headline Songbyrd Music House on Thursday, Oct. 4. Alfie Hudson-Taylor talks to Parklife DC about his experiences as a young musician.

Recently, coffees in our hands, Alfie and I spoke from across the Atlantic. He took the call from Brighton, England, and I from Washington, DC. During our conversation we discussed busking, musical growth, and expensive hobbies.

On being a decade into their musical career…

The festival that we just played (Electric Picnic 2018 at Stradbally Hall Estate on Sept. 1, 2018 in Dublin, Ireland) was the first festival we ever attended. Ten years later, we’re playing on the same stage that we had watched Mumford & Sons on.

Back then, never, ever did we think that we’d be up there on the main stage. It all comes full circle.

Listen to Feel It Again by Hudson Taylor on Bandcamp:

On their musical DNA…

AHT: There was always music in the family. One thing I remember most was singing “Happy Birthday,” on the phone, to our grandparents abroad. We have family in America as well, so singing happy birthday to them and singing harmony. That’s an early memory from growing up.

AHT: This was around the time of the Irish economic crash. We weren’t getting as much pocket money, and we were both growing up. We started learning some covers and our mum said, “Well look, you know these songs, you walk down Grafton Street all the time, you see these buskers, why don’t you go down there and do it?”

We were of course terrified, two 15-, 16-year-old kids going into the city center, busking. What if our friends see us?

We would make around 60 Euro ($70 US) in about an hour. We kinda go, “Yeah, this is good. This could work.” We would film the performances and put them on YouTube. It was all a bit of fun, you know.

Every weekend we would meet so many people just from busking and being on the streets. People from all over the world. We just named ourselves by our first names back then, Harry and Alfie. We’d have this little sign in our guitar case. People took pictures and would follow us on YouTube.

Suddenly, we had this international community of people watching our stuff on YouTube. That’s kind of how we started out. I remember the first 25 views of the busking videos and being mind blown. Twenty-five people! Then you find out where they’re from. Eight people from Germany! What!? Then the other 15 are your mum.

As we did more busking our name got out there a bit more. We got on Irish television when we were quite young. We just started growing naturally, and it has been that way ever since.

AHT: People appreciated what we were doing with the covers, and then we started writing our own songs. The first 10 were terrible. We kept on writing and people started to connect with them and then one day we got an email from this label in London.

I left school. Harry left college. It didn’t happen overnight. We moved to London, worked our asses off for a year or two and got signed. We changed our name to Hudson Taylor, which is our second name (surname).

We then started a whole process of learning. All of my friends were going to college or university, Harry too, so I kind of looked at it like that. It’s all a big learning process. I’ll find out what a label is. Find out how to make a first album. What a record deal really means.

On playing at Dublin’s Olympia Theater…

AHT: The Olympia Theater is on the edge of Temple Bar, which is another one of the spots that we would’ve been busking in. I saw a lot of shows there growing up. It’s a beautiful, lovely theater. Really old, really picturesque. It probably can fit 1,500 to 2,000 people, but it feels very intimate, very close.

The thing that will always strike me about playing there is that we busked for days and hours just down the road. You can throw a stone from where we used to busk to the Olympia. We would finish up busking and walk up the road and see all of these amps and instruments coming out of the door.

It felt so far away. It didn’t feel like we could get there. Every time I’m there I pinch myself and take myself back to a cold evening walking home. There’s just something special about it.

Watch a live video of Hudson Taylor performing “Feel It Again” at The Olympia in Dublin:

On classifying their sound…

AHT: I like pop music, folk, Americana, country. I’m open to all sorts of music. I find it’s very hard to pin us to a genre. That’s why we’ve given you four of them to draw from and our sound is changing. I imagine a lot of artists find this hard.

The brothers thing is a big thing. It’s all about the two harmonies. That’s something that’s very natural and almost unspoken. Since the very first song we played, it just worked in terms of how our voices sit together. Maybe, it’s because we’re brothers, because we’ve been singing to someone over the phone since the age of five.

On their musical influences…

AHT: Nowadays, I have Spotify and that’s an extremely useful tool for discovering music. It has connected so many dots for me.

In the house I dial up the Beach Boys, Simon and Garfunkel, The Everly Brothers, The Beatles. I’m a huge Beatles fan. I’m enamored by The Beatles. Sgt. Pepper or Revolver being my favorite albums.

When we started playing together, myself and Harry, would cover Beatle songs, but then we’ll also cover more modern day songs, like “He Ya!” by Outkast. It’s so mixed.

Now, I’m really digging world music. Not sure where that comes from — probably Spotify.

On cooking and expensive hobbies…

AHT: I have a lovely partner. I’ve been with her since I moved to London in 2011. She also plays music. We have three dogs, so they keep me very busy when I’m home.

I love cooking. I’m a vegan, so I have to really think about what I’m eating, but I love food. I ate meat for years, so I do miss a burger, mac and cheese, but you can do it all vegan. That takes up a lot of time now, researching, trying to replicate cheese. Making it out of nuts, tofu, or whatever. I like to feed people.

Photography is a fast growing hobby — much to my bank account’s detriment. I’m waiting for sponsorship, so if you know anybody…

Bear Creek to Dame Street, the 50/50 studio/live mini-album from Hudson Taylor, is scheduled for release on Friday, Sept. 21. Listen to it on Bandcamp:

AHT: We’re very easygoing about how we release new music, especially with streaming and all that stuff. It’s changing all of the time. People are doing loads of cool and interesting stuff with their music.

We started releasing music again this time last year. Actually, at the same festival we just played, Electric Picnic, we filmed the video for one of our songs called “Feel it Again.” That was the first song back after doing our first album.

We also released an EP, which is like an album sampler. It has five tunes on it and I see that as a good indication of what our next album is going to sound like. Maybe, with a few less dark songs, and a few slower and more harmonic ones.

Now, we’re doing something different again. We’re releasing five tunes that we’ve been performing for the past few years that were recorded live at The Olympia and four new songs never heard before. That’s going to come out in a couple of weeks. This will be the first time we ever released live music with an audience on it.

I’d like to see a new album, with all new material, come out next year. We have a good bit of touring to do this year. We’re going to the states for six weeks and then straight into the European tour.

If you weren’t lucky enough to get tickets for the sold out Oct. 2 show at DC’s Lincoln Theater (with Hozier), you can still get tickets for Hudson Taylor’s headline performance at Songbyrd on Oct. 4.