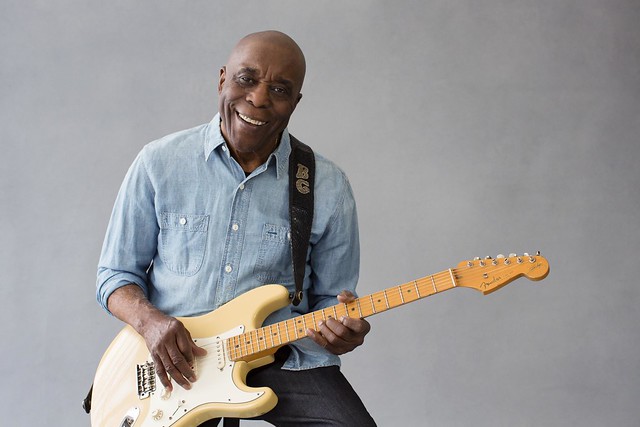 “He’s been called the greatest living guitarist by Eric Clapton, he’s played with blues legends like Muddy Waters and Howlin’ Wolf, and his…double album, Rhythm and Blues, is a powerhouse set with guest shots by Aerosmith, Kid Rock, Gary Clark Jr., Beth Hart, and Keith Urban…”—so begins a feature in Guitar World about the legendary Buddy Guy, who will perform at The Birchmere on Monday, Sept. 24.

At 82 years of age, George “Buddy” Guy continues to prove his prowess as one of the most important American blues guitarists and singers. Ranked in Rolling Stone magazine’s “100 Greatest Guitarists of All Time,” Buddy’s “fretwork became a major influence on titans from Jimi Hendrix to Jimmy Page. Guy’s flamboyant playing — huge bends, prominent distortion, frenetic licks…and his collaborations with the late harp master Junior Wells, raised the standard for six-string fury.”

Watch the video of Buddy’s incredible performance of “Damn Right, I’ve Got the Blues” from Guitar Center Sessions in 2010:

Said Eric Clapton at Buddy’s Rock and Roll Hall of Fame induction in 2005, “He was for me what Elvis was probably like for other people. My course was set, and he was my pilot.”

When asked by Rolling Stone what goes through his mind when he plays “a nasty lick,” Buddy said: “My dad’s last words to me: ‘Son. Don’t be the best in town. Just be the best until the best come around.’ If someone thinks enough of you to come see you, whether it’s cold or it’s ninety-eight degrees, I owe myself to them. I’m gonna give you everything I know, and it might not be worth a shit, but it was the best that I’ve had.”