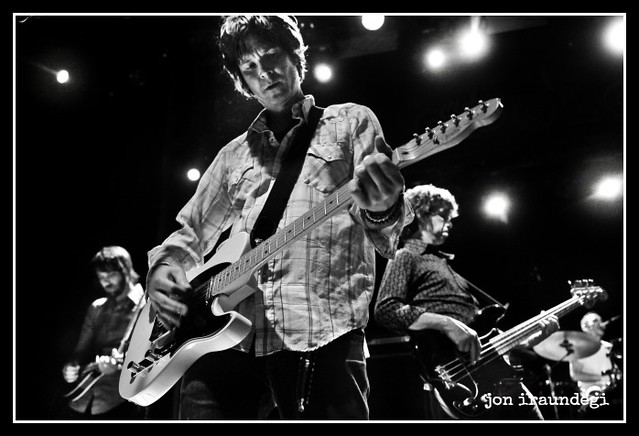 The Jayhawks perform in Barcelona, Spain, on July 14, 2014. (Photo by Jon Iraundegi)

The myth of “Minnesota nice” got a little verification on Thursday night at The Birchmere. Before alt-country legends the Jayhawks started playing, keyboardist Karen Grotberg turned to our table, which was next to the stage, and apologize that she would be turning her back to us at times. She also said she hoped we wouldn’t get blown out by the monitors and, fortunately, we didn’t.

The Jayhawks — original members Gary Louris (lead guitar, vocals) and Marc Perlman (bass), along with Tim O’Reagan (drums, vocals), John Jackson (rhythm guitar), and Grotberg — opened their set with “I’m Gonna Make You Love Me,” from their 2000 album, Smile. I’m not sure about their second song, but the their number was “Quiet Corners and Empty Spaces,” from their next to most recent album, 2016’s Paging Mr. Proust.

This year, the Jayhawks released Back Roads and Abandoned Motels. Of the 11 songs on the album, frontman Gary Louris co-wrote nine with other artists. Most were not originally released as Jayhawks songs. Gary co-wrote the first song played the album, “Everybody Knows,” with the Dixie Chicks.

Listen to Back Roads and Abandoned Motels by The Jayhawks on Spotify:

After playing “Everybody Knows,” Gary invited a special guest to join the band: former Jayhawk and Virginia resident Stephen McCarthy. Gary joked that Stephen had done a great job, but they had to let him go because he demanded more money. The band then played two songs from Stephen’s tenure, “Tampa to Tulsa” and “Stumbling Through the Dark,” from the 2003 album Rainy Day Music.

The Jayhawks played several other songs from their most album. Gary co-wrote “Backwards Women” with the Wild Feathers, and “Come Cryin’ to Me” was released on Natalie Maines’s (lead singer of the Dixie Chicks) solo album. Gary co-wrote “Gonna Be a Darkness,” “a lovely song about death,” with Jakob Dylan, for the HBO program True Blood, which he says he still he hasn’t seen. (It’s really pretty good, if perhaps in a guilty pleasure sort of a way.) During the encore, the band played “Need You Tonight,” which Gary co-wrote with Scott Thomas.

The Jayhawks followed “Backwards Women with the first of three songs from their 1997 album Sound of Lies, “Trouble.” Later, they played “Bottomless Cup” and “Haywire.”

After several songs, Gary invited Stephen back. The band played “A Break In the Clouds,” from Smile, followed by “All The Right Reasons” from Rainy Day Music.” Gary then appeared to improvise. He said that Karen didn’t get enough vocals. and suggested that they play “Last Cigarette,” a Billy Walker cover that appeared on the Jayhawks classic 1995 album Tomorrow the Green Grass. This was one of several songs they played from that album, which also included “I’d Run Away” and “Blue,” to close out their set. Stephen also played “Angelyne” before leaving the stage.

For the encore, Gary came out alone at first and played “Broken Harpoon” from Smile. The band came back and played “Need You Tonight,” after which Stephen McCarthy joined them again. Together, the band played “Save It for a Rainy Day,” then finished the evening with a Golden Smog cover, “Until You Came Along.”

The Jayhawks played to a sold-out house, and they received two standing ovations. The first came after the main set, and the second after the encore. The band commented that the crowd was low-key, but that’s The Birchmere crowds. The crowd was absorbed in the music and respectful of the performers.