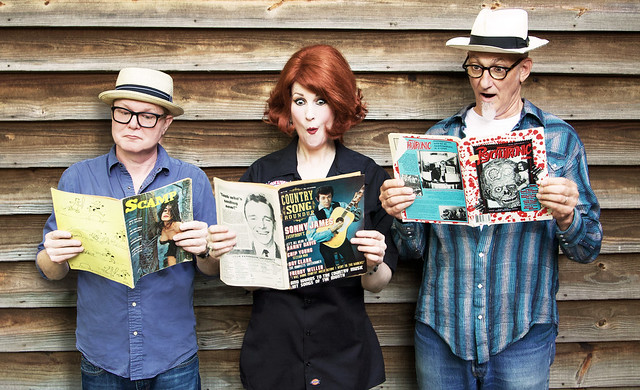 Southern Culture on the Skids (Photo courtesy The Billions Corp.)

When I arrived at Gypsy Sally’s for Southern Culture on the Skids recently, all the tables had been taken. Finally, a friend and I found a couple of folding chairs and set ourselves up near the sound board. We thought that the venue couldn’t get any more crowded, but the legions of SCOTS fans just kept pouring into the venue.

A solid wall of bodies occupied the space from the front to the stage to the bar to the back. At one point on Oct. 20, I thought it might be helpful to snap a shot of the setlist on my cell phone, but I took one look at that mass of humanity and thought better of it.

The Chapel Hill, North Carolina-based band entered the stage to Dick Dale’s “Misirlou,” which they later played as a cover. Surf rock figures as a big part of SCOTS’s DNA, as does rockabilly, country, R&B, and punk.

Fortunately for me, frontman Rick Miller was loquacious in describing the band’s songs. He discussed the “Mojo Box,” a branded product accompanied by a song that the band had released: a Dave Hartman cologne, Rick Miller incense, and the bestseller, “half shellac, half aphrodesiac, guaranteed to keep your man in place, the Mary Huff hair control stick.” Adding to the humor of this is the fact that bassist Mary Huff wears obvious, over-the-top wigs. Drummer Dave Hartman rounds out the band.

Rick and Mary split the vocal duties in the band. At one point, Rick said to Mary, “Let’s do one of yours. Do you want to do Nitty Gritty or Dirt Track?” Mary chose “Nitty Gritty,” recorded on SCOTS’s classic 1996 album, Dirt Track Date.

The concert featured songs from a variety of the band’s recordings. They played “Freak Flag” from their most recent studio album, 2016’s The Electric Pinecones. That song extols the virtues of individuality, in SCOTS’s inimitable “trash culture” way.

The South, including SCOTS’s native North Carolina, is a land of barbecue. They celebrated that with the song “Pig Pickin'” on Saturday night. (Their discography also includes “Too Much Pork for Just One Fork.”)

Also in the mix Saturday night was the title track of their 2000 album, Liquored Up and Lacquered Down. While I am quite familiar with being licquored up (conceptually), I had to research lacquer. Lacquer is shellac or varnish, which seems like an odd thing to apply to a person. There are questions about this band having a shellac fetish.

Stream Bootlegger’s Choice by Southern Culture on the Skids on Spotify:

SCOTS was on fire Saturday night. They packed Gypsy Sally’s to capacity. People eat up their unique musical blend and their winking Southern trash culture act. You’re sure to have a rollickin’ good time when they come to your town as well.