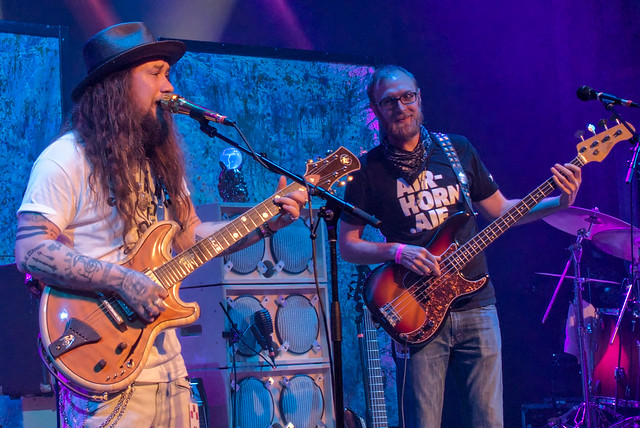 I had a blast at 9:30 Club on Friday night. I almost always enjoy concerts, but every now and then I see a show that goes beyond the normal pleasure that music provides. Vermont band Twiddle gave me that experience at 9:30 Club, easily making my list of the best concerts I have ever seen.

Normally when a band finishes playing, I am about ready to get off my feet, head home, get some rest, etc. Twiddle played for close to two hours, and I would’ve been happy for them to play for two more. With much fanfare, Twiddle jumped right into “Nicodemus Portulay” off of their most recent album, Plump, Chapter 2, a follow-up to their 2015 album, Plump, Chapter 1.

Lead singer and guitarist Mihali Savoulidis hardly spoke throughout the night, and when he did, he was quick and pretty quiet. That didn’t matter to me — and I don’t think anyone else cared. Mihali and company put on a musical performance that had just about everyone dancing, singing, and enjoying themselves all night long.

I knew going in that Twiddle was known for their live performances, and they did not disappoint. The chemistry and precision with which the band played, combined with the groove and dance-worthy sound, really stood out. The band’s technical musical ability would impress any musician, but their songs and the way they play them allow for anyone to get down and groove to their music.

To top it off, they sprinkled in some Halloween-inspired tunes throughout the night, including the Halloween and Harry Potter theme songs. They extended these songs and jammed on them for a while and seamlessly incorporated them into their set. To go with the Halloween theme, drummer Brook Jordan was dressed as William Wallace from Braveheart and I believe keyboardist Ryan Dempsey was supposed to be Elton John. Also of note, the band took a brief intermission, which is not something you see very often. That definitely speaks to the energy and effort that they put into their performance.

Twiddle also played fan favorites such as “Lost in the Cold” and ended the night with an awesome reggae version of “Mad World” during their encore. They did not play their most popular song, “When It Rains It Pours”, which disappointed me a bit, but this was the first of two shows at the 9:30 Club so it’s possible they were saving that for the following night.

Speaking of the second show, if I didn’t already have plans, you can bet I would’ve been there for the second night. That’s how good Twiddle was! I already checked to see if they are coming back to the DMV on this tour, and sadly it doesn’t appear that they are. I highly recommend a Twiddle show.

In the meantime, check out some of their music and albums. The studio albums may not do their live shows justice, but they are still great albums. Their website also has a lot of cool stuff on it, including possibly the biggest selection of merchandise I have ever seen for a band. Keep track of Twiddle and make sure you catch one of their shows if you can.