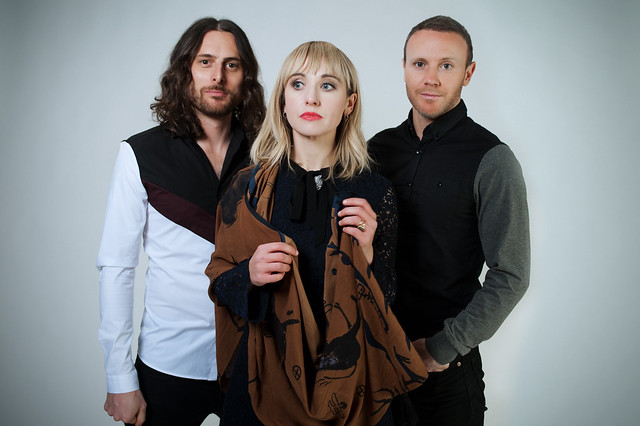 On the new record, The Joy Formidable, always rather shoegazing, have gone quite psychedelic. Lead singer Ritzy Bryan explained, “With life not always being that kind, you can either go down a really dark hole or you can smear yourself with colour and reverie and try to forget. That’s what we did with ‘AAARTH’; we threw ourselves into this beautiful vivacious collage of experimentation, real meets unreal, and stopped giving a fuck about things that didn’t matter, and started caring more about the things that are worth your time.”

Watch the official music video for “The Better Me” by The Joy Formidable on YouTube:

The band now live in the American Southwest, and that too had an impact on the album. Ritzy elaborated, “We’ve definitely made a colorful, mystical collage with this record, partly because of our surroundings. Those multi-colored sunsets and the primeval elements of nature in the Southwest – it’s emboldened our imaginations in the songwriting and the production. I love stories and seeing symbolism and meaning change with different cultures and interpretations. I see it in my lyrics, a lot of the imagery plays on being ambivalent because I’m often expressing a lot of things at once. That’s true of the title; it falls somewhere between a scream, an exaltation, a play on words, and then this motif of the bear (“arth” in Welsh) that spiritually represents strength, wisdom, and healing.”

“That Aaarth feels cathartic comes as no surprise, as the trio have long been purveyors of both aural and emotional heft, but this time around they’ve managed to crystallize both aesthetics into something truly sublime, fulfilling the promise set forth on 2011’s The Big Roar,” enthused James Christopher Monger in a review for AllMusic.

After the show, The Joy Formidable will throw at DJ party at Black Cat! Buy your tickets online.