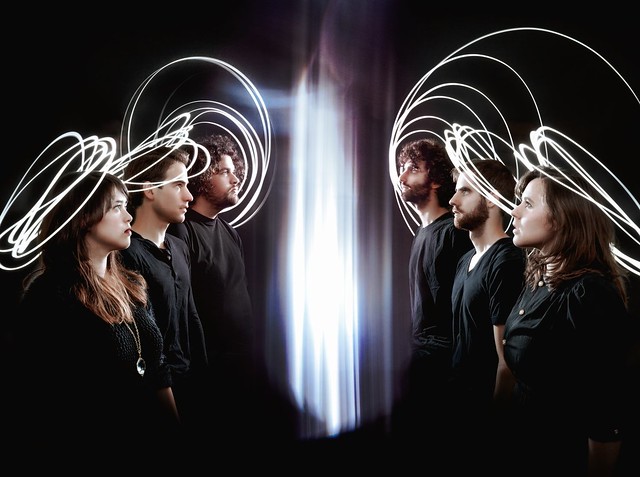 Boston rock band Bent Knee popped in to Baltimore Soundstage recently for a quick set as they make their way around the United States on their latest tour. I got to see them a year ago, and I was looking forward to being surprised again.

When I first start listening to Bent Knee, I wasn’t sure what to expect. Their music intrigued me, and I was curious to hear more. It wasn’t until I saw them live that I fully appreciated how good they are.

Wikipedia describes Bent Knee as an art rock band. It also describes them as avant-garde, which is probably a good description. They don’t really have a specific genre. I can recall seeing drummer Gavin Wallace-Ailsworth wearing a shirt that said “Make Weird Music” the last time I saw them. Not only was it a really cool shirt, but it certainly represents them well. They have heavy songs, they have softer, more mellow songs. Some are catchy while others are more choppy and out there. All of the members are extremely talented musicians, and it’s appropriate seeing as how they met at Berklee College of Music.

Bent Knee most recently released Land Animal, their fourth album, in 2017 via InsideOut. Popular songs from the night included the title track from the latest album and “Being Human” from their 2014 second album, Shiny Eyed Babies. Bent Knee was precise and in-sync as ever at Baltimore Soundstage on Tuesday. They sounded great, and I enjoyed getting to see them again.

I noticed they were playing more of their heavier material. My guess would be this was because they were opening for two metal bands. My favorite part of the band is probably the vocals of Courtney Swain. She has an amazing voice, and it sounds just as good live as it does on their albums. It at times reminds me of a modern Janis Joplin, but it also has an indie feel to it. Production specialist Vince Welch makes her voice even more interesting with his on-stage modifications by adding effects to the vocals.

My biggest complaint would have to be the length of their set. This is no fault of their own. When you are opening for two headlining bands on a Tuesday night, you probably aren’t going to get a very big time slot. When they announced they were playing their last song, someone in the audience let out a “awwww,” a feeling I may have certainly vocalized myself! There was a pretty big crowd to see Bent Knee so I got the sense that there were some people there to see them, not just the headlining acts.

Nonetheless, for about a half hour I got to enjoy the sounds of this great band. I will continue to check their website on and off to see when they are coming back to the area and I hope to get a chance to see them again soon.

Check out some music by Bent Knee on YouTube: