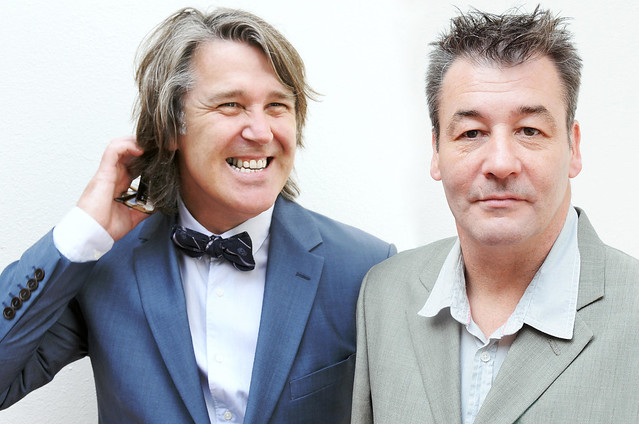 UK sophistipop duo China Crisis has made fantastic music, much of which I personally relate to the English New Romantics and their passionate style of forward-looking lyrics with rousing synthpop.

While they’ve been consistently active since their days on the charts, the band’s visits to the United States have been rare until recently. And now, China Crisis performs at City Winery on Thursday, Dec. 6.

Vocalist/keyboardist Gary Daly and guitarist Eddie Lundon founded China Crisis near Liverpool in 1979, and the gents soon released a remarkable run of albums, beginning with 1982’s Difficult Shapes and Passive Rhythms. In 1985, they released what perhaps qualifies as their best album with Flaunt the Imperfection, an effort produced by the late Walter Becker of Steely Dan.

Flaunt the Imperfection introduced irresistible songs that were thought-provoking as well as dance-inducing with the likes of “Black Man Ray” and “King in a Catholic Style.”

Like other vastly underrated bands of the ‘80s, China Crisis could have called it a day after their run of intellectual pop albums but to my surprise and delight, Gary and Eddie released Autumn in the Neighborhood, a welcome seventh studio album, in 2015, and they have been regularly flying over to the United States for touring stints since then.

The Electricity Club praised the new music upon its release:

“With Daly’s distinctive afflicted lead vocal supported by Lundon’s harmonies, they are a distinctive dual characteristic in the same way that Depeche Mode’s Dave Gahan and Martin Gore or Heaven 17’s Glenn Gregory and Martyn Ware are to their combos,” wrote Chi Ming Lai.

“Certainly, technology has also played its part in this album, but while as Daly’s trusty Jupiter 8 has been recommissioned, this is still very much a traditional songwriter’s work, with sophisticated arrangements of woodwinds, brass, and live percussion very much in the mix,” the review said.