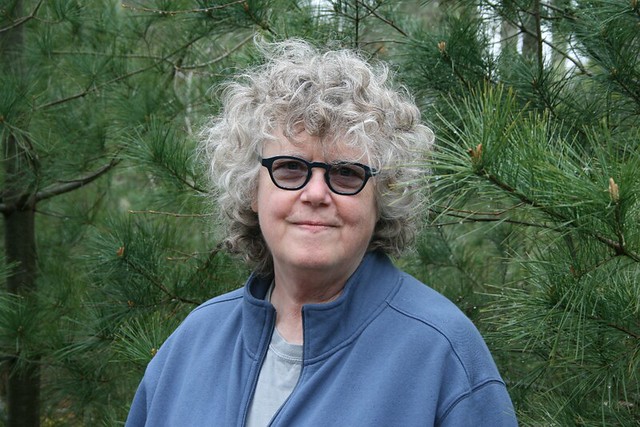 Folk singers Cheryl Wheeler and John Gorka shared the stage at The Birchmere on Sunday evening, taking turns playing songs and telling stories. In two sets, they entertained the crowd with their heartfelt songs and their trademark humor.

John played first, beginning with the title track from his latest album, True in Time. After John finished, Cheryl explained that she and her partner, Kathleen, had drawn up their wills. Cheryl said that found that she didn’t really care about what happened to most of her stuff after she died, except for her instruments. This led to her playing “If I Die Before You.”

Cheryl mentioned that she is from Timonium, Maryland, but moved to New England in 1976. Referring to her disheveled appearance, she joked, “this is one of my snappier outfits,” and played “Northern Girl,” with John singing harmony.

John explained that “I do this [song] as an introduction for new people,” and played the self-explanatory “I’m from New Jersey.” Cheryl told the audience that she wrote the next song in the South. She said she doesn’t normally love the Deep South, but that this trip was lovely. “There’s sugar and butter,” she said, “maybe quaaludes in the butter.” Cheryl then played “Rainy Road into Atlanta.”

After sitting at the piano, John told the audience that online a woman had requested “Houses in the Fields” for her husband. Cheryl accompanied him on vocals. She then picked up her ukulele, telling the audience that she’s never remembered to look at her hair before going on stage. She said that the next song was therefore particularly inappropriate for her to sing, and played Burt Bacharach’s “Wives and Lovers,” a song about a woman composing herself.

John told the audience that he wanted to write a song about aging gracefully, “but it didn’t work out.” Instead, he wrote “People My Age,” about how people age and turn gross, and incorporated Scrapple, which he described as a pork-based non-meat product. Cheryl followed up with “Arrow,” and John joined.

Cheryl said she’d heard a cell phone, but she wasn’t going to be upset or point fingers. She talked about when ringtones first became a thing, how classical music ringtones were all the rage. She thought that classical composers would’ve been tickled to know that their music was being using as ringtones in the 21st century. Cheryl played “It’s the Phone,” which mashed up a number of classical compositions, and the two folksingers went to intermission.

After intermission, John started with a song where he’d added melody to the words of Henry Wadsword Longfellow, “Christmas Bells.” Cheryl shared that she lost her 16-year-old Jack Russell terrier in July, and played the very sweet song “Lean into Me.” As a dog lover, I was very touched.

The concert went in a political direction, beginning with John’s “Oh Abraham,” a song inspired by Lincoln. Cheryl played a protest song written in 1998, “If It Were Up to Me, I’d Take Away All the Guns.” On the subject of guns, John played “Particle and Wave,” a song inspired by watching the March for Our Lives.”

In 2012, Cheryl went on a 32-day road trip with her friend Kenny White. The road trip started in Anchorage on March 1. Cheryl said she likes to go to Alaska in February or March, because “I like nature best when it’s dead.” Later, on the last night of the trip’s swing through northern California, they were at a casino that smelled terribly of English leather cologne. Cheryl had an argument with her wife on the phone, and then she wrote “Kenny’s Song,” an over-the-top country tune with the refrain “Now I like my husband better than my wife.”

Introducing the last song of the set, “Gandhi/Buddha,” Cheryl told the audience that she married her partner, Kathleen, in 2004, when it became legal in Massachusetts. John sang harmony. This love song posits that Cheryl must’ve been as good as Gandhi or Buddha to find her partner. Cheryl also sang the humorous response, “Satan/Hitler,” from her partner’s point-of-view, speculating that she must’ve been quite awful to end up with Cheryl.

The two folk singers didn’t go through the motions of leaving the stage for their encore. After a round of applause, John played “Branching Out,” about growing into a mighty tree. The audience gave them a standing ovation.

These two old friends gave their audience an evening of funny and smart folk songs. They were touching and lovely, and the audience left The Birchmere full of joy in their hearts.