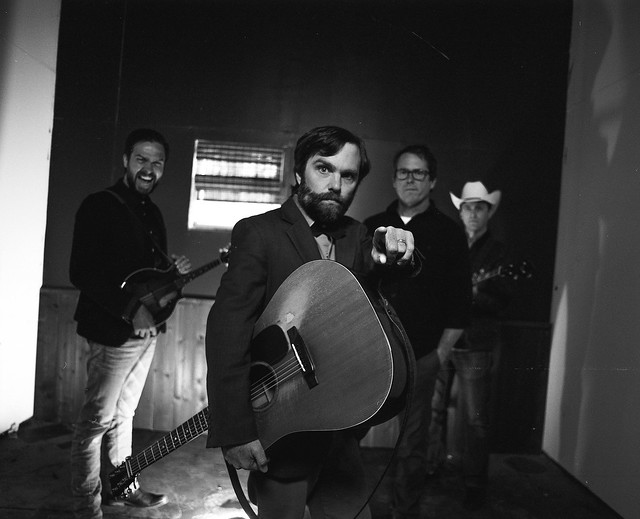 Looking dapper in their suits, the men of North Carolina’s Chatham County Line brought their Electric Holiday Tour to The Miracle Theatre on Thursday evening.

Unlike most holiday shows, CCL’s Electric Holiday Tour doesn’t feature Christmas songs. As guitarist and lead singer Dave Wilson explained, the tour is a holiday from the normally all-acoustic nature of their shows. At their four Electric Holiday Tour shows, CCL plays an acoustic set and an electric set, in which they are joined by guest musicians.

The band opened with “Rock in the River.” Dave wished the crowd happy holidays, and they continued with “Tightrope of Love,” followed by “Speed of the Whippoorwill.”

“The next song,” Dave told the audience, “combines two of my favorite things: trains and women I don’t know.” The audience cheered the opening line of “The Carolinian:” “We met on The Carolinian — heading south from DC.”

By way of introducing the next song, Dave the audience that CCL has an upcoming covers album, Sharing the Covers. He went on to explain that people often ask if he and multi-instrumentalist John Teer are brothers, to which he replies, “Yes, we are the Louvin Brothers.” Ira and Charlie Louvin formed a popular country duo in the ’50s. The band played their song “My Baby Is Gone.”

After the Louvin Brothers song, the band played “Chip of a Star,” then an instrumental number, followed by “Should Have Known.” They played “Bon Ton Roulet” from their latest album, 2016’s Autumn, published by Yep Roc Records.

Dave introduced CCL’s one and only holiday song, “Oh Santa,” released on a Southern Comfort sampler CD with a bottle of the liquor. After the holiday song, banjoist Chandler Holt took lead for a song, introducing “If I Had My Way,” written for his wife.

Coming back to the mic, Dave joked, “If there aren’t some kind and generous donations at merch, I don’t know if little Charlie is getting anything for Christmas.” The band played “Porcelain Doll,” followed by “Wildwood.” During “Wildwood,” John ripped open the space-time continuum with a fiddle solo, while the rest of the band cleared stage; Charlie even sat down right in the audience. The audience awarded this virtuoso performance with hollers and applause; by now, people were standing and some were dancing in the aisles. The band came back to the stage after the fiddle, finished “Wildwood,” and went to intermission.

The songs in the second, electric set included more covers and were a little harder to place. One of the early numbers was CCL’s “Crop Comes In.” The fourth was banjoist Chandler Holt’s pick, J.J. Cale’s “Clyde.” Next up, guest musician Johnny Irion sang lead on Fleetwood Mac’s “Say You Love Me.”

“Out of the Running,” from the album Speed of the Whippoorwill, was followed by an instrumental. Guest Jay Brown took a turn on lead, then John Teer strapped on his electric guitar and rocked the house with The Hollies’ “Long Cool Woman in a Black Dress.”

CCL debuted a new song “Station to Station,” before finishing their second set with one more song. They came back for a two-song encore, ending on The Allmans’ “I’m No Angel.”

After the show, I met the band, genuinely nice, friendly guys. I mentioned to John my opinion that he is finest young multi-instrumentalist I have seen. Chatham County Line is an act you need to see live to truly appreciate; John Teer’s fiddle solo is a small miracle worth the price of admission alone.