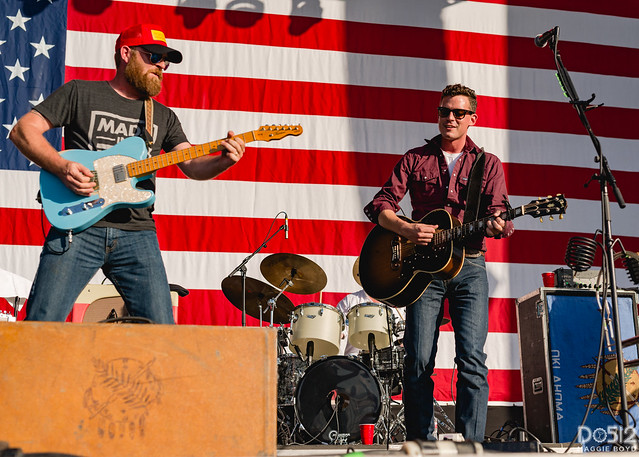 The Turnpike Troubadours perform at Willie Nelson’s 4th of July Picnic on July 4, 2017. (Photo by Do512)

Hard-rocking country band the Turnpike Troubadours played to a sold-out house at The Fillmore Silver Spring recently. The East Oklahoma quintet had the fans, packed up into the rafters, singing along, stomping, and hollering with their Red Dirt music.

Red Dirt music takes its name from the color of the Oklahoma soil. It’s a mix of folk, rock, country, bluegrass, blues, Western swing, and honky tonk, with roots going all the way back to folk music legend Woody Guthrie. Aside from the Troubadours, perhaps the best known Red Dirt band is Cross Canadian Ragweed, which is no longer together. The Turnpike Troubadours fall on the country charts, but their music has at least much in common with Americana and roots music as it does with straight-up country.

Taking the stage at 9pm, the band played “A Tornado Warning,” followed by “Wrecked,” “Shreveport,” “1968,” “Every Girl,” “7&7,” “Winding Star Mountain Blues,” and “Gin, Smoke, and Lies.” Introducing “Down Here,” Troubadours’ frontman and guitarist Evan Felker said, “This is a song about getting your ass whipped and going home.”

Before “Doreen,” Evan told the audience, “The best way to request a song is in an elevator.” With the raucous crowd, I honestly had trouble making out some of what was said during the show. The sound quality also varied across songs, with muddied vocals on some that were somewhat unintelligible. The ADA seating section has an obscured view of the stage; with the density of the crowd, I couldn’t see most of what happened there.

The lights shifted to blue, and the played “Good Lord Lorrie,” a song about “being super good at relationships.” Soon, the Troubadours played “Bossier City,” while the stage was bathed in red light, and Evan introduced the band: bassist R.C. Edwards, fiddler Kyle Nix, guitarist Ryan Engleman, and drummer Gabe Pearson.

Evan told the audience, “Nights like this are why I wanted to do this,” and the band played “Diamonds & Gasoline.” Next up was a song about “three of our favorite things”: “Get Drunk, Get High, Get Loud.”

Under green lights, the Troubadours played “The Bird Hunters.” The ever-changing spotlights turned purple, and the band finished with “A Long Hot Summer Day” with the audience singing along on the refrain. After a standing ovation, the Troubadours returned to the stage and played “Something to Hold on To” for their encore to send the crowd home. That final song sprang from the latest album by the Turnpike Troubadours, A Long Way from Your Heart, released in 2017 by Bossier City Records. It’s well worth a listen!

Stream A Long Way from Your Heart by Turnpike Troubadours on Spotify: