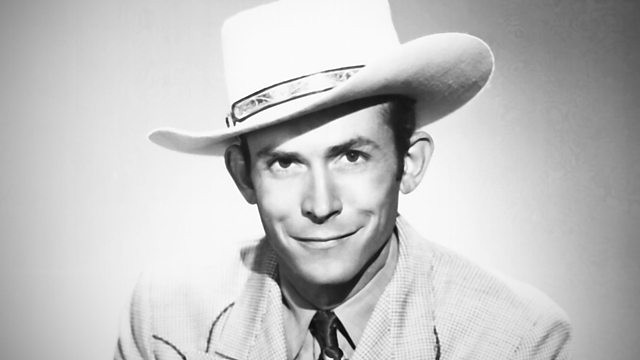 An incredibly talented group of musicians, many with local connections, recently gathered at The Birchmere for the 22nd Annual Hank Williams Tribute.

On Dec. 30, an impressive list of tribute musicians celebrated Hank at The Birchmere. The duo of Maryland native Cathy Fink and Marcy Marxer have 12 Grammy nominations and two wins. Husband and wife Robin and Linda Williams, married and performing together for 45 years, frequently appeared as guests on the public radio program A Prairie Home Companion. For almost as long as they’ve been married, they’ve lived in Staunton, Virginia.

Over two sets, these talented musicians played both well-known and obscure Hank Williams songs, sharing the context for Hank’s music and some of the story of his life. All eight opened with Grammy Hall of Fame song “Jambalaya,” and the configuration of players shifted throughout the rest concert, allowing everyone their time in the spotlight.

“Lost Highway” featured the Kennedys. Pete learned to play and purchased a pedal steel guitar for this concert. The Kennedys, who lived in Reston for several years, now reside in New York City. They still make frequent appearances in the DC area, and will be appearing at the Sleepy Hill Folk Club in Falls Church, Virginia, on Saturday, January 12.

The Williamses displayed the wit and humor that led Garrison Keillor to put them on the air as they introduced “Lovesick Blues.” Linda joked, “I was born in Alabama, but I’ve taken pills for it. It’s hardly noticeable now.” She also spoke of her memory of her family getting caught in Hank’s funeral procession when she was a very young girl.

Before playing “Setting the Woods on the Fire,” Pete mentioned that he has a new memoir out, entitled Tone, Twang, and Taste and read a hilarious story from the book. Once, he was hired for a gig in Frederick with the instructions that he wear whatever he want and bring a banjo. Normally, he said, gigs specified either a tux or a suit. When he arrived at the gig, it turned out to be a fast food joint, and they had him wear a dragon suit and play the banjo. Dressed in the suit, playing the banjo, a friend walked in, and Pete tried to call his name, lurching toward him. The friend, terrified, fled.

“Boothill Drag,” a dance song, was released in 1950 as the B-side to Bob Wills and the Texas Playboys’ “Fated Love.” The next song, Robin said, is “in the DNA of anyone who sings country music.” Linda added “Even if you don’t know it, you know it,” inviting the audience to sing along to the classic “Your Cheatin’ Heart.”

The concert included one original song, the Williams’ “Rollin’ and Ramblin (The Death of Hank Williams),” which has been recorded by Emmylou Harris. Introducing the song, they explained that Hank was born with a back problem, and he was in pain for most of his most of his life.

Robin told the audience that Hank recorded less commercial material, such as “Ramblin’ Man,” under the pseudonym Luke the Drifter. Many of these songs, he said, are commentaries on society. “Ramblin’ Man” afforded Robin the opportunity to show off his harmonica skills. Later, they played another song Hank recorded as Luke, the early 20th Century tune “A Picture from Life’s Other Side.” As depressing as the song is, Robin said that Hank leaves out a verse about a man accidentally murdering his own brother.

Willie Nelson has truly sung duets with everyone. He’s even sung a duet with Hank Williams, who died before Willie started his career. In 1985, Willie used an unreleased tape to create a spliced together duet of the two of them singing “I Told a Lie to My Heart.”

“This song has only 11 lines,” Cathy pointed out, “but it says everything that needs to be said about feeling lonesome.” She invited the audience to sing along to “I’m So Lonesome I Could Cry.” The entire crew sang “Hey Good Lookin’,” and the show went to intermission.

After intermission, Robin and Linda sang the famous “Cold, Cold Heart,” and Patrick got his chance to shine on the instrumental “The Line Has Blues.” Patrick can be seen making regular appearances with Vincent & Daly.

After the gospel song “House of Gold” came one of Hank’s most covered songs. Written by Curly Williams (no relation), “If You Love Me Half as Much as I Love You” has been recorded by Rosemary Clooney, Eddie Arnold, Patsy Cline, Petula Clark, and Van Morrison, to name just a few. Cowritten with Governor Jimmy Davis (“You Are My Sunshine”), “Lonesome Whistle” became Hank’s 14th consecutive top 10 hit and one of the inspirations for Johnny Cash’s “Folsom Prison Blues.”

After a few more songs, the gang sang “Honky Tonk Blues,” then they ended their set with “I Saw the Light.” After booming applause, Marcy teased the audience, “You’re so nice. We’re going to come to where you work and cheer for you.” Not going through the motions of leaving the stage for an encore, they sang “Mind Your Own Business.”

After the classic songs and singalongs, several of the artists mingled with the crowd, signing merchandise and chatting. Many folks in the audience had a four-day weekend, and even those who didn’t, only had to go to work Monday before getting New Year’s Day off on Tuesday. Perhaps this created the atmosphere of calm and content that seemed to reign over the event. Or maybe, y’know, it was the spirit of Hank Williams looking after us.