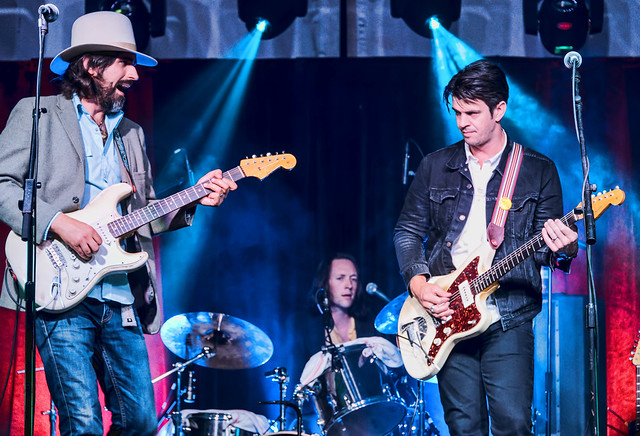 Coming from one of America’s great musical cities, Austin, Texas, The Band of Heathens played on New Year’s Eve at Hill Country BBQ. Formed in 2008, the BoH mixes Americana influences with roots rock. On their most recent project, A Message from the People Revisited, they journey into soul, gospel, and R&B.

As expected for NYE, the evening had a fun, party atmosphere, and drew a large crowd. To make room for the larger NYE’s crowd, Hill Country held this event in their main restaurant, rather than their smaller, dedicated basement music space. Attendees lined up before the door time, quickly grabbing the few available tables. Most of the audience stood for the show.

BoH’s latest release, A Message from the People Revisited, recreates Ray Charles’s classic 1972 album. The band showed just how eclectic Ray was in constructing the album: the five songs they played Tuesday night came from five different genres. The gospel number “Heaven Help Us All,” a song about some of our country’s problems, contrasted with the John Denver and area resident Bill Danoff-written country of “Take Me Home, Country Roads,” “a song about some of what’s right in America.” The bright pop of “Look What They’ve Done to My Song, Ma” differed from the R&B “Every Saturday Night,” and “America the Beautiful,” which closed their encore, needs no description.

Stream A Message from the People Revisited by The Band of Heathens on Spotify:

In 2017, BoH released a four-song EP of original material, Duende. BoH covered all the material from the EP in their concert. They opened with a pair of songs from Duende, “Sugar Queen” and “All I’m Asking.” Later in the set, after playing the songs from A Message to The People Revisited, they returned to Duende, playing “Deep Is Love,” and finishing their set with “Trouble Came Early.”

“Green Grass of California,” released as a single, sings the praises of marijuana. Although Austin has not legalized pot, the city has unofficially adopted the motto “Keep It Weird.” I lived in Austin 15 years ago, and even then one could smoke pot openly in a public place like Barton Springs.

BoH pulled deep from their catalog to fill out their set. They went all the way back to their first release, Live At Momo’s, playing “Bumblebee.” BoH played a pair of songs each from 2009’s One Foot In The Ether and 2011’s Top Hat Crown & The Clapmaster’s Son: “You’re Gonna Miss Me” and “LA County Blues,” and “Jackson Station” and “Hurricane.” They released Carry Your Love” as a single in 2014.

Returning for their encore BoH tore the house down, with a groove-filled cover of Wilson Pickett’s “Midnight Hour.” This is what Americana’s all about, where funk meets country, twang meets R&B and rock and soul — a bold, brilliant melange of American musical traditions and styles, drawing on from the past, looking toward a beautiful future.