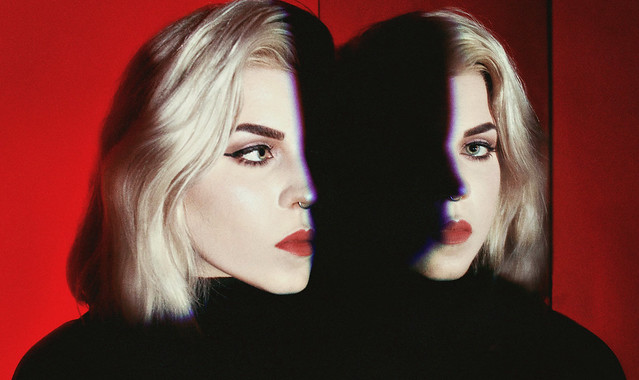 Car Astor, a very talented young electropop musician from New York City, visited DC recently. While she was here, Car sat down for a chat with Parklife DC at Union Station prior to a photo shoot for another outlet. In our interview, we dug into the future of the memorable singer-songwriter, formerly known as SEE. (This interview was edited for length and flow.)

For more information on Car Astor, visit her website.

Mickey McCarter: Well, I’m gonna ask you something I’m sure everybody’s been asking you in the last couple of months. You changed your name from “See” to “Car Astor.” Why?

Car Astor: So, I picked the name when I was 17, and I had no clue what I was gonna do with it, but I felt a draw to the name SEE. By the time that all that music had come out, I went a huge growth period last year, and I just felt like I wanted it to be more personal. And people called me Car in my real life. My name’s Carley. And I felt like I picked SEE as this weird mask thing because I was afraid of being in the front. I don’t know if that makes any sense. It felt way more personal to have a name that I was actually me. And also people couldn’t Google the name SEE, that was very funny.

So that was part of it — and I don’t know, I just felt like I needed a little bit of a fresh start. I felt like a new person which was not connecting with me anymore.

MM: In a somewhat evolutionary way, you’ve gone from being a drummer to a singer. And is that part and parcel with the same changes?

CA: It feels actually so similar, just delayed almost. I always grew up in the back and was never in the spotlight at all or never really wanted to be and I think SEE was … almost sounded like a band name. It was just a situation where I wasn’t comfortable to be upfront. And now I feel like I am, so singing was the same way.

MM: So, you’re carrying a guitar. Do you play more guitar these days than drums?

CA: Definitely more guitars than drums in live situations. I play the bass now in a live band situation. I play drums for fun.

MM: You’re done as drummer though, as a recording artist?

CA: I will drum on my own records when I need to, and I do wanna drum in my live show a little bit — to do some cool stuff — but I’m definitely a singer full time.

MM: Tell me a little bit about future projects. I saw “Girlfriend” and listened to that and what a great dance record.

Watch the official music video for “Girlfriend” by Car Astor on YouTube:

MM: I presume that you’re looking at an album here some time soon?

CA: Yeah. Right now I have enough tracks for an EP. So, I have six, and we’re figuring out how to release them. I have a new single in the works, shooting the video for that soon. I’m going back into the studio to record five more songs, six more actually. So I’m between putting out an EP and a record, depending on how well the first two or three singles do.

MM: Tell me a little bit about your process. You’re writing new songs, you’re talking about that you went through some life changes. Is this stuff that you’re feeling and you have to express it? Or is it more about collaborating with somebody?

CA: Everything is really personal. I only write about personal experiences that I’m having. I’ve been writing with my best friend, whose name is Kirsten Maxwell. She’s a folk singer, and we just have this really amazing songwriting relationship. It’s almost like therapy because I’ll literally cry to her about this situation I’m going through and we’ll get every detail down and turn it into a song. And I still write on my own as well but for a lot of these new songs we’ve been company-writing them together.

But all very personal for sure.

MM: Will you be working with the same producer? It was Brad …

CA: I’ve worked with Brad Wood on the Ties EP which was the thing I dropped in 2016. That EP also was a co-production with Walter Dicristina. And I’m producing everything with Walter now.

MM: Okay. And there will be a full-length album next year? Maybe?

CA: I would hope so! In the next year, yeah. There will definitely be a couple songs before then.

MM: What about touring? Where have you been, and where are you going?

CA: I just got the live band together, and we’ve been making some adjustments with that, with what I’m playing and what everyone else is doing. So in the new year, we’re gonna start doing full band shows.

MM: Are you based in Brooklyn right now or Long Island?

CA: I’m based on Long Island. I would like to be in Brooklyn but need some more money first! (chuckles)

CA: I played Rough Trade in Brooklyn recently, and I played that when I first released my earlier EP — and I love it there. I have such a good time always, I feel like it’s a really good crowd.

CA: It’s a nice space, it sounds good, and it’s a good size because it’s intimate but you can still fit a good number of people in there. It’s good for connecting, I think, having an audience listen and actually pay attention. I’ve been doing Sofar Sounds gigs too, and those are so much fun.

MM: You were in DC to visit Voice of America. What was that?

CA: So, I appeared on Voice of America, and I played three tracks. I did one track called “Closed Eyes Open” that was on Ties. And then I did “Girlfriend” and then a newer track. And it was great. I had such a good time and the interviewer was very nice and I think it went well.

Watch Car Astor play “Closed Eyes Open” acoustically in a One On One Garden Session at The Underwater Sunshine Festival in New York City in 2018:

MM: And now I understand you’re working on a video? What’s that track again?

CA: That track is called “Don’t Stop Don’t Speak.” It’s not out yet. But it’s a little more rock, I would say — still a little upbeat, emotional, but rock. We might see that in January.

MM: A little more rock? You’ve cited influences previously like Neil Young and Fleetwood Mac and bands like that. Rockers with a folky edge, if you will. Not really “Girlfriend” per se, but …

CA: I have a ton of influences. I love Neil Young, Fleetwood Mac, Coldplay, Radiohead. But growing up, I initially was super into No Doubt and Paramore and female-fronted pop rock grooves. So I feel like that’s coming through but I also love pop music. I love folk music. I don’t really know, I’m kind of a mixed bag here!

MM: Me, I totally hear the No Doubt influence. And others have compared you a bit with Shirley Manson, and I was like, “Oh, I get that too.”

CA: I love those comparisons. I’ll take them any day. Those are the classic girls. I’m all in it.

MM: What do you do for fun? When you’re not writing music, what do you enjoy doing?

CA: God, I love cooking. I’m a huge cooking person. I don’t know, my mom is an amazing chef and my grandma works for a famous chef, so it’s very in my family to cook. So, doing I do that — and what else? I literally only do music. I write every day.

And I love make-up and experimenting with that and other types of art and clothes, so it’s all creative, I guess.

MM: When you do a music video, are you active in saying what you’re going to wear and how your make-up’s going to be?

CA: Yeah, I style everything. I’m directing all my new music videos for myself, writing the treatments, hiring the team. I’m a control freak.

CA: Yeah, music videos are definitely a really cool outlet for that. And even acting in them, which I’m gonna now be doing, is something really cool too. But I never felt comfortable doing that a couple years ago. I’m coming out of my shell.

MM: I’m so glad that so many artists have embraced music video, because I feel like it adds this whole new dimension, and you can make a great song even better by watching a great video that goes well with it.

CA: Yeah, absolutely. I think it only can enhance the song if you do it right.

It also just allows the artist to really put across how the song makes them feel. All of my color palettes with the new videos that I’m planning are how I feel like a song sounds to me and just the energy behind it. It’s really fun.

CA: I’ve been watching a lot of older music videos, like a lot of Placebo. I love Placebo. They had a couple of really good ones that I’m referencing for my newer videos.

CA: I’ve been stuck in that hardcore the past year!

MM: Going forward, where are your ambitions, let’s say, five years from now? Where are you, Car Astor? Do you have a couple albums under your belt? Are you doing something bigger, different? Do you wanna be a stadium act? Or do you wanna be a small club act?

CA: I think everyone dreams of doing stadium stuff, so I would love to do that but if that’s not what happens, I just want a solid career, no matter what it is. Whether it’s playing in clubs my whole life or stadiums, whatever it is.

But what I most want is the ability to put out whatever kind of record I want and have it connect with people because with all these different influences, I feel like I would love to make a superb, raw, organic folk record with just me and an acoustic guitar. Or I would love to do more pop rock stuff. And I think I just want the time in my career to explore all of it and hopefully people will be on board. So that’s what I want the most.