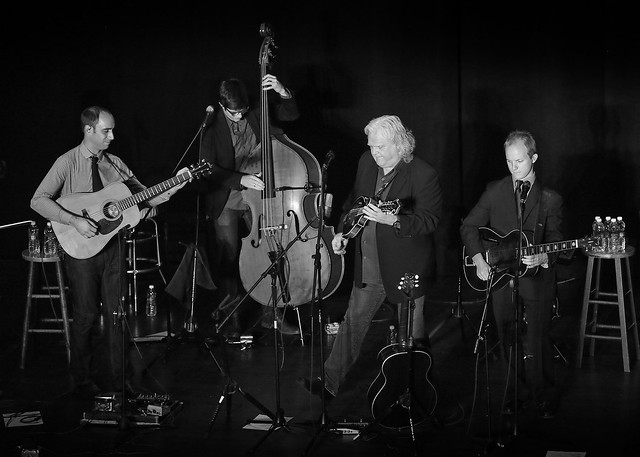 Ricky Skaggs and Kentucky Thunder perform at The Beacon Theatre in Hopewell, Virginia, on Oct. 15, 2014. (Photo by Tom Saunders)

Ricky Skaggs often plays his first shows of the year at The Birchmere. This year, he told Friday night’s audience, he first played a couple of shows in his hometown, where he lives with his second wife, singer Sharon White, and her 89-year-old father, Buck.

Buck leads a family band that includes Sharon and her sister, Cheryl. The family band tradition in country music stretches back at least as far as the Carter Family. Ricky himself grew up playing in a small-time bluegrass band with his parents. At 16, he would join the Clinch Mountains, the band fronted by Ralph Stanley.

After playing in a series of bluegrass bands, Ricky would join Emmylou Harris’s band, replacing Rodney Crowell, who left to pursue his own solo career. Emmylou’s Hot Band served as a springboard for Ricky to make his entry, too into “commercial country music.” As a mainstream country artist, Ricky had a series of #1 hits. And though his first instrument is the mandolin, and his second is the fiddle, Ricky would come to play the electric guitar guitar for several years.

In 1996, Ricky lost his father and the man he describes as his musical father, Bill Monroe, in the same year. With a renewed sense of purpose, Ricky decided to turn away from mainstream country and return to his bluegrass roots. He assembled his band, Kentucky Thunder, and has been playing bluegrass with them ever since.

While Ricky didn’t make The Birchmere his first stop this year, he did have something special in store. After the fourth song in his set, Bill Monroe’s classic “Uncle Pen,” Ricky told the audience he was recording for his live CD.  Ricky warned us in case “you’re sitting with anybody you ought not be sitting with,” he teased.

Stream Hearts Like Ours, the 2014 album by Ricky Skaggs and Sharon White, on Spotify:

Skaggs returned to Monroe again later in the set with “Blue Night” and “Kentucky Waltz.” Skaggs and his band played a song that Monroe sang with Lester Flatt, and which his parents sang together, “Mother’s Only Sleeping.” They covered a Scruggs and Flatt tune, “Little Girl of Mine in Tennessee.” Ricky mentioned that Scruggs and Flatt’s fiddle player, Irving Rouse, wrote “Sweeter than the Flowers.”

No bluegrass show would be complete without instrumentals. Ricky threw in a couple, going to the first after opening his set with his original song, “How Mountain Girls Can Love.”

Ricky’s band, Kentucky Thunder, has an unusual configuration. He uses three acoustic guitars: one for solos, one for rhythm, and one in a capoed position. Ricky himself plays the mandolin most of the time, although he did trade his mandolin for one of the guitars briefly. Bass and fiddle round out the band.

A break in the bluegrass came when Ricky introduced his band and one of the guitarists sang James Taylor’s “Carolina on My Mind.” The song began as a solo, with the band joining in part way through. This guitarist, Ricky explained, is on his second tenure with Kentucky Thunder, having been with the band in the ’90s, when Ricky first returned to playing bluegrass.

Ricky is not shy about proclaiming his faith, whether on stage or in his memoir, Kentucky Traveler. Ricky believes that his musical talent is a gift from God, and he honors God with his performance. Speaking about his father-in-law Buck’s dementia, he quoted a scripture verse to the effect that prosperity is the reward for honoring parents. “That’s not why we do it,” he was quick to point out.

Regardless of whether one shares Ricky’s worldview, his musicianship is of the highest caliber. Ricky can play multiple instruments with greater proficiency than most performers can play a single one, and he has a fine, fine tenor voice. Through his playing with Ralph Stanley and his relationship with Bill Monroe, Ricky is a living link to the foundations of bluegrass. For fans of the genre, this is an essential artist — not to be missed.