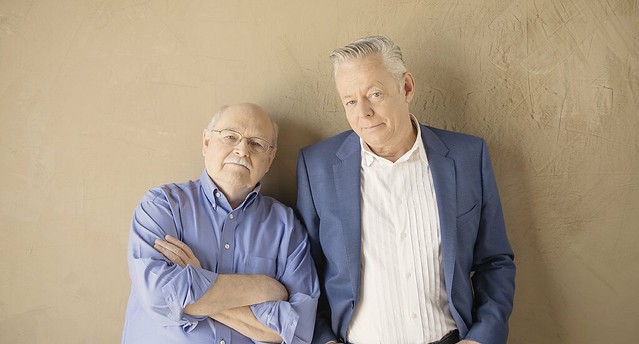 The sign on the marquee read, “Tommy Emmanuel, CGP,” and below that, “John Knowles, CGP.” CGP stands for Certified Guitar Player, a designation bestowed by master player Chet Atkins on a small number of extremely talented guitarists. Only three remain, and, with Chet having passed in 2001, there won’t be any more. And you likely never heard a show like the show played by two of these last CGPs at The Birchmere on Tuesday.

Tommy and John collaborated for the first time on a joint album, Heart Songs, released this month. At 77, John doesn’t really go out out on the road, so Tuesday’s packed concert at The Birchmere offered a very rare opportunity to see two acoustic masters play together.

Tommy opened both sets of the show playing solo, and John later joined him for duets. While Tommy did sing on a few numbers, the evening mostly consisted of instrumental tunes. Playing guitar at this level, playing multiple parts, incorporating tricks like slapping the body for percussion, is absolutely exhausting and requires intense concentration, making singing difficult.

Bringing John out for their first set of duets, Tommy said that now that John had a guitar break on the road, he’s a real “road dog.” Tommy said that all his guitars have broken over the years; it’s inevitable, no matter how careful one is. “It’s just a hunk of wood,” he said. “Get it fixed, and keep playing it.”

Before their first duet, Tommy joked, “We’d like to begin with Beethoven’s Seventh Symphony, but we don’t know it.” Instead, they began with “our little tribute to Chet Atkins and Paul Yendell,” “The San Antonio Stroll.” Their next pair of songs yo-yoed from the ’50s, Don Gibson’s “I Can’t Stop Loving to You,” to the ’90s and one of Tommy’s favorite composers, Billy Joel’s “Goodnight My Angel.”

Tommy and John then veered in a completely different direction, with “There’s A Place for Us” from West Side Story, composed by Leonard Bernstein. John quipped, “We’re serious research guys, so we went to YouTube.” They described how they tried to capture the emotion of the scene: “For a moment, love is the only thing in the room.” With their two guitars, Tommy and John also tried to create a “musical conversation” to mirror the one between Tony and Maria.

A very sweet moment followed as John played lead and Tommy followed on a song that John had written for his son, Jay, who has since become a Grammy-nominated songwriter. On “Cold, Cold Heart,” Tommy said, “John plays some amazing chords under the melody. People are going to be studying those chords for 100 years.”

Opening the second set, Tommy cornily joked, “I had several requests, but I’m going to continue anyway.” He sang on “House of the Rising Sun,” and followed it with an instrumental number. Tommy explained how he wrote “Lewis and Clark,” one of his better-known songs, while teaching guitar at the eponymous college in Oregon. One day, he saw people in early 19th-century costume, and he asked them what they were doing. “Walking the Oregon Trail,” they told him. Tommy, as an Australian, had no idea who Lewis and Clark were, so he bought a copy of the trail diary, which inspired the song. Writing this song, he learned, “You can’t force music. It has to flow through you in a natural way.”

Tommy became emotional when he spoke about leaving his native Australia. In Australia, he was all set up to get a major record deal with Warner, but the company wanted him to wear a tux and play with an orchestra, and it wasn’t what he wanted. He could never convince his brother Phil, who played with him in Australia and passed away last year at 65, to leave Australia, which saddens him to this day. The feelings around this life change led him to write “Those Who Wait.” After playing it, Tommy explained that it sounds “big” because the guitar is tuned a step down.

Tommy covered the Beatles, individually and as a group, in the second set, with John Lennon’s “Imagine,” and with a medley of songs that included “64,” “While My Guitar Gently Weeps,” and “Day Tripper.” Inviting John back to the stage, they paid tribute to Phil with a song that Tommy used to do with him, “He Ain’t Heavy, He’s My Brother.”

Most likely, you’ve never seen or heard acoustic guitar played like this. Tommy is considered one of the best acoustic guitar players ever, combining incredible technical proficiency with creativity, flair, sensitivity, and nuance. He does things with the guitar that most people have never dreamed of. And you’ll leave as if waking from a dream after seeing these old masters perform.