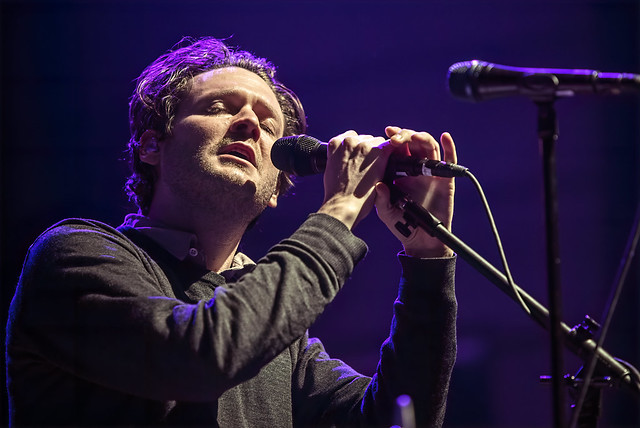 Beirut, the musical creation of multi-instrumentalist and songwriter Zach Condon, had some humble beginnings — a truly bedroom project where he used to live in Sante Fe, New Mexico. But that project has, for the past several years, become an amazing musical force, pulling influences from Italian westerns to European folk music. But the one thing that ties it all together is the unique voice of Zach himself, which we heard clearly at The Anthem recently.

After taking some time off since their last album, No No No, Beirut is back with a new album, Gallipoli, which was released this month on 4AD Records. It’s another beautifully expansive album that is full of sweeping horns, harmonies, and staccato organ. Live, Zach often plays a six-stringed ukulele and trumpet along with his band, which includes Nick Petree on drums, Paul Collins on bass and acoustic guitar, Kyle Resnick on trumpet/vocals, Ben Lanz on trombone/vocals, and Aaron Arntz on piano/ accordion/ organ. And on Valentine’s Day Zach brought the sounds of Gallipoli to The Anthem.

Stream Gallipoli by Beirut on Spotify:

As the band took the stage, Zach started with a new song from Gallipoli, “When I Die,” strumming the opening chords on ukulele with Kyle and Ben joining in with a chorus of brass. It’s a beautiful thing to witness these intricate layers of sound. And as the evening progressed, you could see the that this was just as special to the musicians on stage as to the audience. I swear, I didn’t see a moment when Nick wasn’t smiling as he was keeping those syncopated beats.

The set at The Anthem included something for everyone as the band played not only several songs from the new album but also reached back to tunes such as “Postcards from Italy” from the 2006 debut, The Gulag Orkestar, and “The Shrew” from March of the Zapotec and Real People Holland across to the title track from 2015’s No No No. And even during one brief break, someone in the audience called out, “Happy Birthday, Zach!,” which prompted the band leader to sheepishly admit made him all of 33.

Beirut continues their tour on through the summer. Definitely check them out here!

Here are some photos of Beirut performing at The Anthem on Feb. 14, 2019. All images copyright and courtesy of David LaMason.